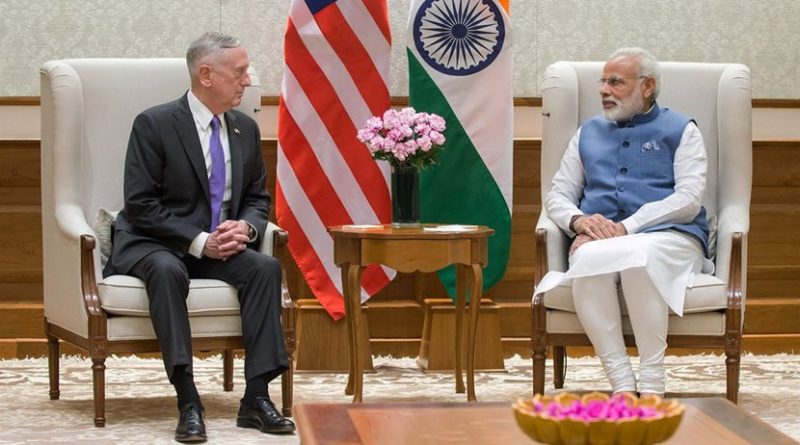 The United States, Japan, India, Australia – may emerge as guarantors of free trade and defense cooperation to check China.

The juxtaposition of two speeches could not have been starker. Even as Chinese President Xi Jinping was laying down his vision of a rising China in a marathon address to the 19th Communist Party Congress, the US secretary of state underlined a still evolving American response to the changing global balance of power.

Xi offers an ambitious roadmap for China to become a leading global power by 2050. “Chinese people will enjoy greater happiness and well-being, and the Chinese nation will stand taller and firmer in the world,” Xi promised, suggesting that the time has come for China to transform itself into “a mighty force” to lead the world on political, economic, military and environmental issues.

Since the 2016 election of Donald Trump, Xi has projected himself as a responsible global statesman committed to maintaining global norms and leading on tackling challenges such as climate change and trade. Though he maintains that China does “not pose a threat to any other country,” the speech’s undertone asserts China’s global might, a trend accentuated since he came to China’s helm in 2013. He did not flinch from citing Beijing’s controversial island-building campaign as among his first term accomplishments, reporting that “construction on islands and reefs in the South China Sea has seen steady progress.” For China’s detractors, the message was unambiguous: While China is not interested in seeking global hegemony, “no one should expect China to swallow anything that undermines its interests.” The emphasis on transforming the People’s Liberation Army into one the world’s top militaries by 2050 was for China’s global audience. Lest anyone miss the point, Xi noted, “A military is built to fight.”

Barack Obama had described US-Chinese ties as the most important bilateral relationship of our time, but the Trump administration lays down its own markers. Ahead of his visit to South Asia, Secretary of State Rex Tillerson announced American intentions for Asia with India firmly at the center. His comments followed those of US Defense Secretary Jim Mattis during a September trip to New Delhi, suggesting that security among the “key strategic pillars” of the US-India partnership. Tillerson gave this a wider canvas, pointedly critiquing China’s rise and comparing it with India’s: “China, while rising alongside India, has done so less responsibly, at times undermining the international, rules-based order – even as countries like India operate within a framework that protects other nations’ sovereignty.”

Tillerson underscored China’s actions in the South China Sea as a direct challenge to “the international law and norms that the United States and India both stand for,” suggesting provocatively that the United States will “never have the same relationship with China, a nondemocratic society, that we can have with India.” While the US “seeks constructive relations with China,” Tillerson pointed out that Washington “won’t shrink from China’s challenges to the rules-based order or where China subverts the sovereignty of neighboring countries and disadvantages the US and our friends.”

Much like its predecessor, the Trump administration had come to office seeking an accommodation with Beijing, but Washington expresses growing frustration about China’s unwillingness to put pressure on North Korea despite its considerable influence over the Kim regime. In contrast, the Trump administration has been bold in its overtures to India, building upon the Obama administration’s strong legacy. The Narendra Modi government has invested significant diplomatic capital in building ties with Washington, with Modi visiting the United States five times during the last three years. Many Indians had expressed consternation that Trump’s transactional approach to diplomacy might be to India’s disadvantage. But those concerns have been put to rest with the success of Modi’s September visit to Washington and the Trump administration’s Afghanistan policy.

If Modi could argue that India and the United States have overcome “the hesitations of history” under the Obama administration, he effortlessly wooed the Trump administration during his July 2017 visit when he suggested that “the convergence of my vision for ‘New India’ and President Trump’s vision for making America great again will add new dimensions to our cooperation.” He managed to steer Trump towards the larger structural realities that have driven the India-US relationship since George W. Bush declared that America would help India emerge as a global power. Regional balance of power in Asia was the focus when Modi and Trump declared their two nations “as responsible stewards in the Indo-Pacific region,” agreeing that a close partnership between the United States and India is central to the region’s peace and stability.

Modi has time and again noted that he recognizes the importance of the United States in meeting India’s developmental and strategic interests. This time too, he underlined that India “considers the US its primary partner for [its] social and economic transformation.” While critics in India may see this as a repudiation of India’s traditional nonaligned foreign policy posture, Modi has had no hesitation in proclaiming the obvious without the diffidence of past governments.

The Trump administration’s new South Asia policy announced in August gives India center stage in South Asia. A “critical part” of this policy, while being tough on Pakistan, is to further develop the strategic US-Indian partnership. “We appreciate India’s important contributions to stability in Afghanistan, but India makes billions of dollars in trade with the US, and we want them to help us more with Afghanistan, especially in the area of economic assistance and development,” Trump said. New Delhi has welcomed the approach that gives India greater space to expand its profile in Afghanistan. Trump’s policy is a remarkable turnaround for Washington, which had wanted to keep India out of its “Af-Pak” policy for fear of offending Islamabad. India went from being viewed as part of the problem to being part of a solution to the Afghan imbroglio.

Acknowledging India’s growing regional profile in the wider Indo-Pacific region, Washington suggests that the starting point should be greater engagement and cooperation with Indo-Pacific democracies. As Tillerson suggested, “We are already capturing the benefits of our important trilateral engagement between the US, India and Japan. As we look ahead, there is room to invite others, including Australia, to build on the shared objectives and initiatives.”

The October landslide victory of Shinzō Abe in Japan accentuates this trend towards an Indo-Pacific democratic quad – the United States, Japan, India and Australia. The United States is keen on expanding India-Japan-US Malabar naval exercises to include Australia, and a meeting of the India-Japan-US-Australia quadrilateral is expected to in Manila on the sidelines of the East Asia Summit. These four regional democracies would ideally like to emerge as guarantors of free trade and defense cooperation across a stretch of ocean from the South China Sea, across the Indian Ocean to Africa.

This new chessboard in the Indo-Pacific is being organized as the US president visits the region. While the wider region expresses concern about the Trump administration’s security commitments, even as China’s rise seems to go unchallenged, there are signs that new strategic equations are fast emerging in a theatre now the center of gravity of global politics and economics. Trump started his Asia tour by declaring that “No one, no dictator, no regime… should underestimate American resolve.” But regional states will watch what happens after the US president departs the continent. Washington is finding that working with Xi’s China to manage regional problems while standing up to Beijing to reassure allies is a tough balancing act indeed.

Home » Facing Aggressive China: The US May Be Inching Towards Asian Alliance – Analysis