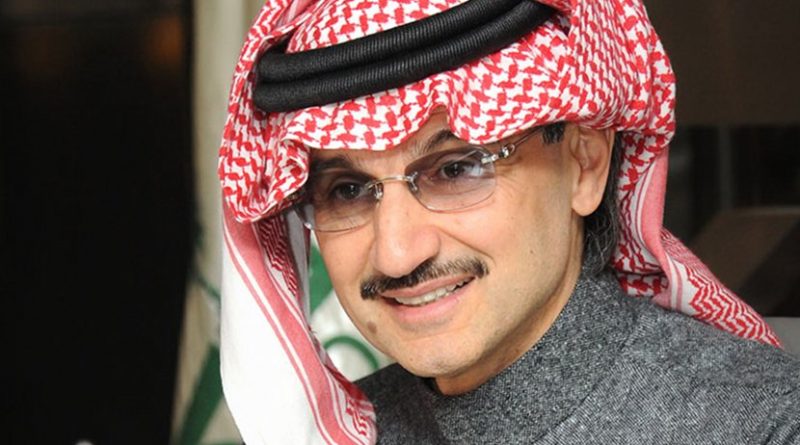 In the wake of news over the weekend that billionaire Prince Alwaleed bin Talal was arrested in Saudi Arabia comes a second hit: a nearly $2 billion drop in his net worth, Forbes says.

Alwaleed’s grandmother was Munaiyir, whose family escaped the Armenian Genocide in the Ottoman Empire between 1915 and 1923. She was presented to Ibn Saud in 1921, when they were 12 and 45 years old, respectively.

Alwaleed, a member of the Saudi royal family and the wealthiest man in the Middle East on the Forbes billionaires list, was arrested in Riyadh, Saudi Arabia on Saturday, along with at least a dozen other prominent Saudis amid a reported crackdown on corruption. The bad news sent the stock of Alwaleed’s Kingdom Holding tumbling. As a result, he is now worth $16.8 billion, down from $18.7 billion on Saturday, according to Forbes’ real-time rankings of the World’s Billionaires.

Alwaleed owns 95% of Saudi-listed Kingdom Holding, which in turn owns stakes in a broad swath of companies in the U.S. and Saudi Arabia, including Citigroup, Twitter, and the Four Seasons hotel management chain.

His net worth fell $1.2 billion on Monday following a $700 million drop on Sunday (the Saudi stock market is open on Sunday, a weekday in the country).

His arrest came at the behest of a powerful new anti-corruption committee, headed by the Saudi Crown Prince. Saudi billionaire Saleh Kamel and at least a dozen other prominent Saudi businessmen and politicians were also arrested, according to media reports and a list that was shared with Forbes.

On Monday, the CEO of Kingdom Holdings released a puzzling, nonsensical statement, saying that the “The Kingdom of Saudi Arabia is in full confidence with Kingdom Holding Company (KHC).” It also says: “I am not surprised by the Government’s vote of confidence as KHC pursues its investment strategy and global business operations.”

Ahmed Hindawy, a senior analyst at Riyadh-based investment bank Albilad Capital interpreted the statement as a sign that operations at Kingdom Holding will continue normally. “The government will be very keen to keep the situation under control because Kingdom Holding is a big company and it’s in everyone’s interest to keep the company successful,” Hindawy said. “It is unclear at the moment if the corruption allegations are tied to Kingdom Holding or are solely related to the arrested Prince and the other accused people” he added. According to the New York Times, no formal charges were made in conjunction with the arrests.

Representatives from Kingdom Holding did not respond to a request for comment.

The 62-year old Prince Alwaleed bin Talal is a nephew of the current King Salman bin Abdulaziz al Saud and a cousin of the heir apparent, Crown Prince Mohammed bin Salman. Alwaleed graduated from Menlo College in northern California and Syracuse University before founding Kingdom Holding in 1980. Today, the company has stakes in ride-sharing firm Lyft, Hotel George V in Paris and the Savoy Hotel in London. Outside of Kingdom Holding, the Prince owns the majority of Arabic-language entertainment firm Rotana, real estate in Saudi Arabia and other assets.