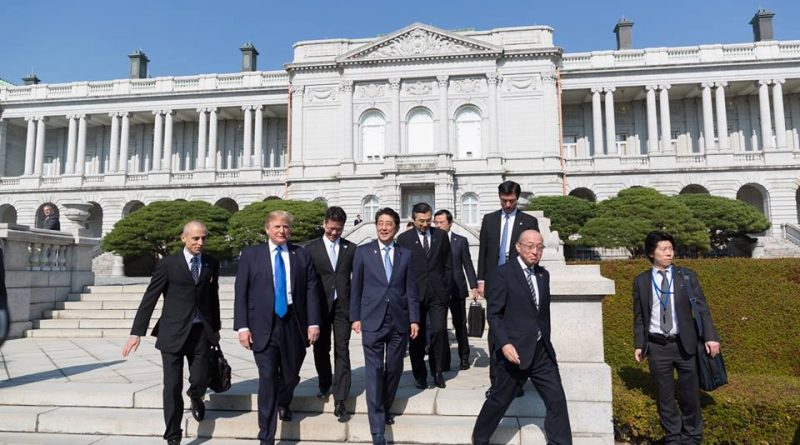 US President Donald Trump’s 12-day visit to five of the East Asian countries is quite ‘unprecedented’. But so are his style, posturing, statements and policies. Trump will meet not only the leaders of Japan, South Korea, China, Vietnam and the Philippines, but also Russian President Vladimir Putin.

This ‘grand trip’ to the region both in terms of time span and the leaders Trump plans to meet is posited in an environment in which the leaders of these countries are almost at the peak of their domestic political popularity, which the US president does not enjoy in his own country. Although such factors do not necessarily make a big difference to the content of deliberations, they will definitely cast a shadow over it.

Another important factor is strong East Asian leaders taking aggressive positions on regional issues, except South Korea. Similarities in leadership personality may be helpful to the US in forging a common strategy on issues of mutual agreement. However, these similarities may also be an obstacle in making deals and driving bargains if these leaders disagree with Trump.

According to the US Department of State, Trump visit will focus on “North Korea, promoting a free and open region, and fair and reciprocal trade.” The US-China equation will underpin all discussions, particularly the security and economic domains. Thus, to achieve anything substantial, it would be important to watch Trump’s visit to China. Trump is going to visit Tokyo and Seoul before Beijing for important regional backing before approaching China’s ‘strongman’ Xi Jinping. The content of his talks with Vietnam and the Philippines will be shaped by the gains and misses of the previous visits.

In Tokyo, Trump will seek to underline the long and trusted alliance with Japan and the commonality of their intent in the three pronounced focus areas. There is almost complete consensus between Trump and Japanese Prime Minister Shinzo Abe over regional issues and nothing new is expected to emerge from the visit. Talks with Seoul will be more nuanced because South Korean President Moon Jae-in does not agree with the US approach towards the North Korean issue, installation of missile defence, and revision of the US-South Korea free trade agreement (FTA). Trump will likely push South Korea for more open support of US’ policy on North Korea and the installation of missile defence systems. In return, he may be willing to make concessions in the FTA revision process. However, experts are not certain that this will in fact be the bargain, and that Trump, as a former businessman, may make it the other way round.

Trump’s brand of diplomacy will be put to its real test in Beijing, and it will be interesting to observe how he bargains on security and economic issues. Equally interesting will be the nature of his messaging to China – strong or soft – in terms of bringing Beijing on board to achieve US’ foreign policy goals in the region. The prospect of any substantial outcome is weak, which is quite common for most of summit meets. In this light, any attempt to accommodate each other’s interest will be significant.

Trump’s visit to Vietnam will impinge on the expectation of injecting more content and trust in bilateral relations. Vietnamese Prime Minister Nguyen Xuan Phuc was the first Southeast Asian leader to visit Washington in May 2017 to meet Trump. Vietnam is unhappy with the US because of its abrogation of the Trans-Pacific Partnership (TPP), and is reluctant to have deep military ties because of the memories of the Vietnam War. Washington is definitely interested in placating Hanoi in its efforts to deal with China. Trump will also attend the Asia-Pacific Economic Cooperation (APEC) economic leaders’ meet in Vietnam.

Trump will be in Manila, meeting President Rodrigo Duterte for the second time this year. Their first meeting in April 2017 went well – both leaders were ‘appreciative’ of each other. Unlike the Obama administration which raised concerns about the extra-judicial killing of drug dealers in the Philippines, Donald Trump has been able to bring about mutual acceptance between the two countries. The US has, to a large extent, neutralised China’s attempt to improve relations with the Philippines. There is a high probability of positive outcomes from Trump’s Manila visit. Trump is scheduled to attend the East Asia Summit in Manila where he might have a meeting with Russian President Vladimir Putin.

Overall, Donald Trump’s visits to the region appear to be extensive and with a substantial agenda – the issue is whether they will be able to achieve anything significant from the point of the three expressed objectives. The probability of any such outcome is negligible, and this is so because success is generally achieved through consistent and continuous diplomatic effort, along with an interest in accommodating others’ positions. It is hard to do so by being inconsistent, episodic, and attempting to cover so much ground in one single visit. The visit might be ‘unprecedented,’ but the outcomes are most likely not going to be so.