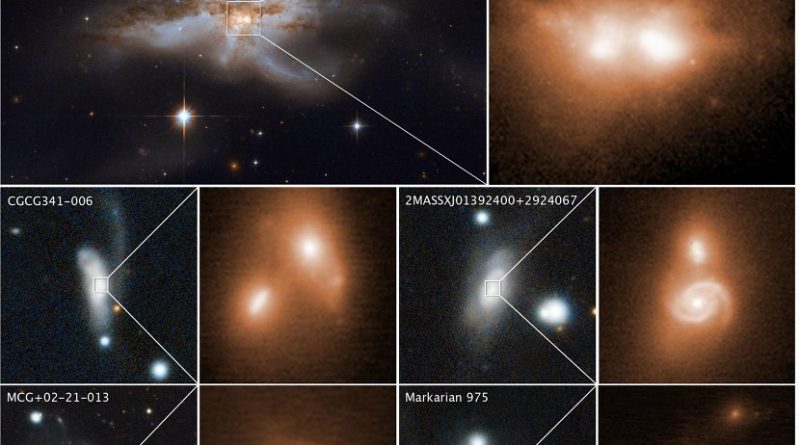 These images reveal the final stage of a union between pairs of galactic nuclei in the messy cores of colliding galaxies. The image at top left, taken by Hubble's Wide Field Camera 3, shows the merging galaxy NGC 6240. A close-up of the two brilliant cores of this galactic union is shown at top right. This view, taken in infrared light, pierces the dense cloud of dust and gas encasing the two colliding galaxies and uncovers the active cores. The hefty black holes in these cores are growing quickly as they feast on gas kicked up by the galaxy merger. The black holes' speedy growth occurs during the last 10 million to 20 million years of the merger. Images of four other colliding galaxies, along with close-up views of their coalescing nuclei in the bright cores, are shown beneath the snapshots of NGC 6240. The images of the bright cores were taken in near-infrared light by the W. M. Keck Observatory in Hawaii, using adaptive optics to sharpen the view. The reference images (left) of the merging galaxies were taken by the Panoramic Survey Telescope and Rapid Response System (Pan-STARRS). The two nuclei in the Hubble and Keck Observatory photos are only about 3,000 light-years apart -- a near-embrace in cosmic terms. If there are pairs of black holes, they will likely merge within the next 10 million years to form a more massive black hole. These observations are part of the largest-ever survey of the cores of nearby galaxies using high-resolution images in near-infrared light taken by the Hubble and Keck observatories. The survey galaxies' average distance is 330 million light-years from Earth. Credit: NASA, ESA, and M. Koss (Eureka Scientific, Inc.); Keck images: W. M. Keck Observatory and M. Koss (Eureka Scientific, Inc.); Pan-STARRS images: Panoramic Survey Telescope and Rapid Response System and M. Koss (Eureka Scientific, Inc.)

For the first time, a team of astronomers has observed several pairs of galaxies in the final stages of merging together into single, larger galaxies. Peering through thick walls of gas and dust surrounding the merging galaxies’ messy cores, the research team captured pairs of supermassive black holes–each of which once occupied the center of one of the two original smaller galaxies–drawing closer together before they coalescence into one giant black hole.

Led by University of Maryland alumnus Michael Koss (M.S. ’07, Ph.D. ’11, astronomy), a research scientist at Eureka Scientific, Inc., with contributions from UMD astronomers, the team surveyed hundreds of nearby galaxies using imagery from the W.M. Keck Observatory in Hawaii and NASA’s Hubble Space Telescope. The Hubble observations represent more than 20 years’ worth of images from the telescope’s lengthy archive. The team described their findings in a research paper published in the journal Nature.

“Seeing the pairs of merging galaxy nuclei associated with these huge black holes so close together was pretty amazing,” Koss said. “In our study, we see two galaxy nuclei right when the images were taken. You can’t argue with it; it’s a very ‘clean’ result, which doesn’t rely on interpretation.”

The high-resolution images also provide a close-up preview of a phenomenon that astronomers suspect was more common in the early universe, when galaxy mergers were more frequent. When the black holes finally do collide, they will unleash powerful energy in the form of gravitational waves–ripples in space-time recently detected for the first time by the twin Laser Interferometer Gravitational-wave Observatory (LIGO) detectors.

The images also presage what will likely happen in a few billion years, when our Milky Way galaxy merges with the neighboring Andromeda galaxy. Both galaxies host supermassive black holes at their center, which will eventually smash together and merge into one larger black hole.

The team was inspired by a Hubble image of two interacting galaxies collectively called NGC 6240, which later served as a prototype for the study. The team first searched for visually obscured, active black holes by sifting through 10 years’ worth of X-ray data from the Burst Alert Telescope (BAT) aboard NASA’s Neil Gehrels Swift Observatory.

“The advantage to using Swift’s BAT is that it observes high-energy, ‘hard’ X-rays,” said study co-author Richard Mushotzky, a professor of astronomy at UMD and a fellow of the Joint Space-Science Institute (JSI). “These X-rays penetrate through the thick clouds of dust and gas that surround active galaxies, allowing the BAT to see things that are literally invisible in other wavelengths.”

The researchers then combed through the Hubble archive, zeroing in on the merging galaxies they spotted in the X-ray data. They then used the Keck telescope’s super-sharp, near-infrared vision to observe a larger sample of the X-ray-producing black holes not found in the Hubble archive.

The team targeted galaxies located an average of 330 million light-years from Earth–relatively close by in cosmic terms. Many of the galaxies are similar in size to the Milky Way and Andromeda galaxies. In total, the team analyzed 96 galaxies observed with the Keck telescope and 385 galaxies from the Hubble archive.

Their results suggest that more than 17 percent of these galaxies host a pair of black holes at their center, which are locked in the late stages of spiraling ever closer together before merging into a single, ultra-massive black hole. The researchers were surprised to find such a high fraction of late-stage mergers, because most simulations suggest that black hole pairs spend very little time in this phase.

To check their results, the researchers compared the survey galaxies with a control group of 176 other galaxies from the Hubble archive that lack actively growing black holes. In this group, only about one percent of the surveyed galaxies were suspected to host pairs of black holes in the later stages of merging together.

This last step helped the researchers confirm that the luminous galactic cores found in their census of dusty interacting galaxies are indeed a signature of rapidly-growing black hole pairs headed for a collision. According to the researchers, this finding is consistent with theoretical predictions, but until now, had not been verified by direct observations.

“People had conducted studies to look for these close interacting black holes before, but what really enabled this particular study were the X-rays that can break through the cocoon of dust,” explained Koss. “We also looked a bit farther in the universe so that we could survey a larger volume of space, giving us a greater chance of finding more luminous, rapidly-growing black holes.”

It is not easy to find galactic nuclei so close together. Most prior observations of merging galaxies have caught the coalescing black holes at earlier stages, when they were about 10 times farther away. The late stage of the merger process is so elusive because the interacting galaxies are encased in dense dust and gas, requiring very high-resolution observations that can see through the clouds and pinpoint the two merging nuclei.

“Computer simulations of galaxy smashups show us that black holes grow fastest during the final stages of mergers, near the time when the black holes interact, and that’s what we have found in our survey,” said Laura Blecha, an assistant professor of physics at the University of Florida and a co-author of the study. Blecha was a JSI Prize Postdoctoral Fellow in the UMD Department of Astronomy prior to joining UF’s faculty in 2017. “The fact that black holes grow faster and faster as mergers progress tells us galaxy encounters are really important for our understanding of how these objects got to be so monstrously big.”

Future infrared telescopes such as NASA’s highly anticipated James Webb Space Telescope (JWST), slated for launch in 2021, will provide an even better view of mergers in dusty, heavily obscured galaxies. For nearby black hole pairs, JWST should also be capable of measuring the masses, growth rates and other physical parameters for each black hole.

“There might be other objects that we missed. Even with Hubble, many nearby galaxies at low redshift cannot be resolved–the two nuclei just merge into one,” said study co-author Sylvain Veilleux, a professor of astronomy at UMD and a JSI Fellow. “With JWST’s higher angular resolution and sensitivity to the infrared, which can pass through the dusty cores of these galaxies, searches for these nearby objects should be easy to do. Also with JWST, we will be able to push toward larger distances, to see objects at higher redshift. With these observations, we can begin to explore the fraction of objects that are merging in the youngest, most distant regions of the universe–which should be fairly frequent.”