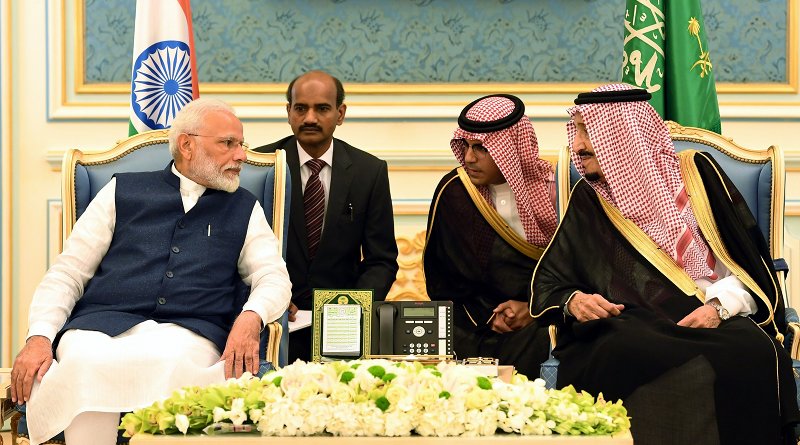 Indo-Saudi relations, after a long 13 years since the Delhi Declaration in 2006, have found the much needed strategic compatibility in order to build a safer and stable regional order. The Saudis have been waiting for this moment for a long time when an Indian leader could see Saudi-Indian relationship beyond the Pakistan-Saudi spectrum. A few years ago when a Saudi delegation was visiting New Delhi, its members made their opinions clearly known to their Indian hosts that Saudi Arabia is ready for a strategic partnership with India. Their main complaint was that India has not yet come out from its reluctance despite being a strong civilizational neighbour of the West Asian region. By declaring to establish the Strategic Partnership Council, both countries have found a mechanism to realise untapped opportunities beyond bilateral relations.

The announced statement underlines three key roles that both sides have agreed to find a common ground for their strategic partnership. First, territorial integrity to all conflict zones that includes Yemen and Syria, the support to a Palestinian state with East Jerusalem as its capital, and the safety and security of waterways in Indian Ocean region. The statement incorporated an elaborated Indian position on Yemen, Syria and Palestine that acknowledges, territorial integrity of Yemen and Syria, the centrality of the Gulf initiative in resolving the Yemen crisis, the role of United Nations Security Council resolutions concerning Yemen, and finally, the importance of political dialogue as the only way to resolve the crisis. In the same way, the joint statement reiterates the role of the United Nations and the Arab Peace Initiative for Palestine. This ends the confusion that India under Modi may abandon its principle Palestinian position.

The question arises as to why and how India has reached such an elaborated policy understanding when India has traditionally been maintaining non-partisan position in the past. Perhaps two incidents have played an important role in reshaping India’s understanding of Saudi Arabia’s security perceptions. One, the drone attacks on Aramco and the other as Saudi civilian installations, claimed by the Houthis in Yemen had surprised the international community. The Houthis in Yemen have demonstrated a capability that underlined the culpability of a third country, Iran – as often accused by Saudi authorities. By pushing Saudi Arabia to that extent of insecurity, Iran’s regional ambitions have gone beyond bilateral rivalry in which many Asian countries including India were trying to find a difficult balancing act. The Aramco drew immediate international disapproval, including the United States, Europe, China, Russia and Turkey. The stability and security of Saudi Arabia in this context remain very important in reshaping India’s Gulf policy. The strategic partnership council is a message to the forces in the region that undermines Saudi Arabia’s fundamental threat perceptions.

Second, Iran has failed to come to terms that do not threaten India’s careful balancing act between the Gulf rivals. That delicate but necessary Indian position was undermined by many in Iran who maintained heightened anti-Saudi rhetoric and publicly disregarded the role of the United Nations’ supported Gulf Initiative in Yemen and the importance of political dialogue as the only way to come out from the crisis. Beyond Yemen, Iran’s role in the current protests in Iraq and Lebanon, where the protesters are mainly the Shia population, revealed Iran’s declining standing within its sectarian politics. Many Iraqi politicians are now reaching out to their Gulf neighbours; prominent Shia leader Muqtada Al Sadr being the first leader who met the Crown Prince Muhammad bin Salman in July 2017 in Riyadh. This also sent a message that Saudi Arabia is ready to look Iraq beyond sectarian angles. In April 2019, the Iraqi Prime Minister visited Saudi Arabia. The Saudi-Iraqi rapprochement continues despite Iranian displeasure.

Moreover, Prime  Minister Narendra Modi has reasserted India’s earlier Iran policy once stated by Dr Manmohan Singh, “Iran should not go the nuclear weapon path”. The prolonged confrontational relations between Iran and its neighbours are indeed detrimental to India’s long term energy and strategic interests. In recent months, Iran’s supreme leader and other Iranian politicians have made adventurous statements on Jammu and Kashmir that has also irked Indian policymakers who in the past have made efforts to take Tehran onboard in many of its problems with Pakistan. Iran’s internal power struggle is believed to be the reason of its recent Kashmir statements, that however– has weakened the confidence between the two nations.

The joint statement on Strategic Partnership Council has also highlighted how India and Saudi Arabia have reached a shared regional perspective on scores of issues. The joint statement includes issues such as the Arab Israeli conflict and India’s principled support to the Arab Peace Initiative started by Saudi Arabia back in 2005, Syria, Yemen and counter-terrorism efforts. Most importantly, the joint statement once again reiterated India’s Palestine policy, expressing hope for “just, comprehensive and lasting peace in Palestine based on the Arab Peace Initiative and the relevant UN resolutions, to guarantee the legitimate rights of the Palestinian people and the establishment of their independent state on the 1967 borders with Jerusalem as its capital.” These are the issues that are of equal importance for both sides and particularly for Saudi Arabia should Saudi Arabia wants to continue its leadership in the Arab world. For the Indian side, the joint statement acknowledges “extremism and terrorism” as a threat to all nations and societies. It is believed that Saudi Arabia is no longer convinced by Pakistan’s excuses on US designated terrorist individuals and institutions inside Pakistan. Both countries also agreed for the UN mechanism to fight against terrorism.

Both the countries have agreed “to promote ways to ensure the security and safety of waterways in the Indian Ocean region and the Gulf region from the threat and dangers that may affect the interests of the two countries, including their national security”. The statement though comes without specifying the origin of the threat, this clearly responds to statements that come from several circles in Iran that often threaten to interrupt the waterways of Hormuz. For India, the acknowledgement by Saudi Arabia of Indian role in the Indian Ocean demonstrates the increased level of confidence between the two countries.

Saudi Arabia’s close proximity with the United States and India’s commitments to non-aligned international relations during the Cold War period has brought Saudi Arabia in forefront of the American-supported anti-Soviet struggles in Afghanistan and elsewhere. Saudi Arabia saw Arab nationalism, and Soviet-styled socialism as a threat to its own religious leadership in the region. Once upon a time Saudi Arabia had fought against Gamal Abdul Nasser, the most popular Arab nationalist leader.  It also supported the Taliban in anti-Soviet Jihad in Afghanistan and supported global Islamic networks that served the same objectives. The 9/11 attacks, however became a turning point in Saudi Arabia’s reliance on religion-based legitimacy. The Iraq war, the Arab uprisings and then the Syrian and Yemen wars have all proved the long-held assumption mostly wrong that the instability in West Asia may destabilize energy market. Saudi Arabia has realised that the new energy sources including big discovery of Shale in the US and the entry of new exporters in the global energy supply such as the US, Russia and Iraqi Kurdistan Regional Government will only weaken Saudi Arabia’s oil centric economy and the US-dependent security. The sustained low oil prices in the last many years forced Saudi Arabia to post a rare deficit budget. The need to diversify their rentier economy and to find security partners beyond the United States are the only choices. Iran’s expanding military influence inside Iraq, Syria and Lebanon along with the rise of an assertive Turkey are becoming a frequent reference in Saudi Arabia’s security discourse. The gradual retreat in or unpredictable US’ Gulf policy and the Qatar-Saudi crisis have only accelerated Saudi Arabia’s revision of the regional security mechanism, where with the help of Russia, China and India a diversified security architecture could be incorporated.

The joint statement, though a qualitative step forward, needs to be realised with more confidence-building measures between the two countries. For India, its increasing role in the Gulf may bring new opportunities for its membership claims at the United Nations Security Council, closer relations with the Arab League or an advanced participation at the OIC and other West Asian regional forums. This upgraded partnership between India and the Gulf will see how India will institutionalise the partnership by offering the region necessary support that it needs at this time along with the military trainings and joint defence productions. The presence of several unresolved conflicts and rivalries, the Qatar-Gulf relations, the Arab-Israeli conflict, the Yemen and Syrian crisis, Iran’s nuclear ambitions will indeed be a testing ground of this partnership.

India gradual replacing Pakistan in Gulf countries’ security arrangements could be a game changing development, if and when  India would find Saudi Arabia’s help in getting its reservations addressed on to the platforms of Taliban-US dialogue, India-Pakistan relations, the Rohingya crisis and China’s Belt and Road Initiative, and cross border terrorism issues. A sustained and cross-sectors engagement as envisioned by the joint statement will prove how far India and Saudi Arabia would succeed in transforming the new partnership to a joint regional mechanism for regional security and economic rationalisation.