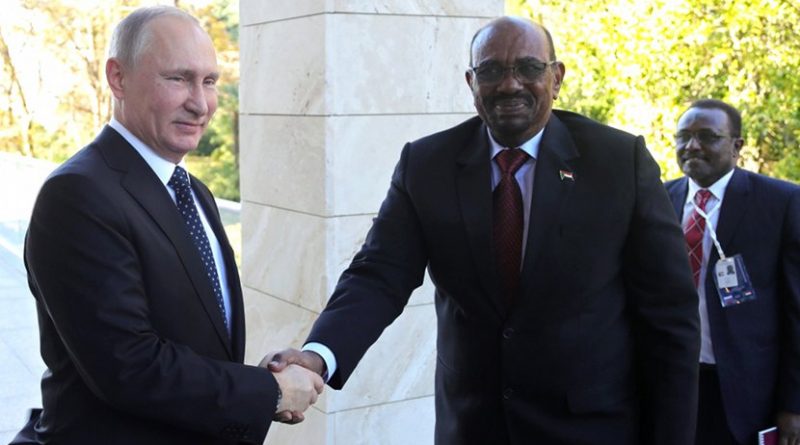 Over the years Russia and Sudan have maintained a strong economic and diplomatic partnership and resultantly Russian leader Vladimir Putin has expressed readiness to help with delivery of military weapons and hardware during diplomatic consultations with President of the Republic of Sudan, Omar Al-Bashir, in Sochi.

Al-Bashir, who is wanted by The International Criminal Court for genocide and war crimes related to the Darfur conflict, visited Russia on Nov. 23. Al-Bashir has denied charges against him and continues to travel to various countries with impunity, despite being wanted by the Hague-based court.

While the two sides exchanged opinions on the development of Russian-Sudanese relations and topical international issues, including the situation in the Middle East and North Africa, Omar Al-Bashir officially made a request for delivery of Russian weapons to protect what he called “protection from aggressive US actions.”

Omar Al-Bashir added “We think the situation that developed in our country (the same applies to Darfur and South Sudan) has the same roots – US policy. As a result, our country split into two parts, which made a bad situation worse. We need protection from aggressive US actions.”

Sudan has become the first Arab country to acquire the fourth generation Su-35 fighter jets from Russia just ahead of the visit. The first batch of jets were delivered to the country and considered the backbone air superiority fighters for the Russian airforce. The UAE signed a similar agreement earlier this year to develop the same jets with Russia.

Sudanese deputy air force commander, Salahuddin Abdul Khaliq Saeed, announced the deal in March. He told Sputnik news agency that the aircraft will contribute to the consolidation of Sudan’s defenses and will provide it protection from any threat.

The number of fighters delivered, however, was not released. However, Izvestia financial newspaper pegged the total cost of arms delivery, modernization of Soviet military hardware and training of military staff at $1 billion.

Amnesty International had slammed Russia for breaking the UN arms embargo on Darfur, Russians sold weapons like Mi-24 helicopters, Antonov 26 planes, Russian weapons sales to Sudan. It was reported these weapons were used to slaughter Darfur civilians
Sudan’s deadly conflict in Darfur broke out in 2003 when ethnic minority groups took up arms against Al-Bashir’s Arab-dominated government, which launched a brutal counter-insurgency.

The UN says at least 300,000 people have been killed and more than 2.5 million displaced as a result of the conflict. Top Sudanese officials including Al-Bashir now claim that the conflict has ended, but the region continues to see regular fighting between myriad ethnic and tribal groups.

Russia-Sudan economic relations continue to develop but currently the total volumes remain unimpressive and only one-sided. Last year, there was a 66 percent growth, and over 80 percent in the first nine months of 2017.

The Sudan is a major buyer of Russian grain. This year, Russia is expecting to boost grain supplies to the market to one million tons. On the other hand, Sudan plans to introduce, for the first time, the Sudanese vegetables and fruits to the Russian market.

Russia also plans to cooperate in the energy sector, including geological prospecting, production and resource exchanges. The hydrocarbons sector, the power industry and the development of the civilian nuclear power industry also have good prospects. In addition, Russian companies are particularly interested in geology, peaceful uses of nuclear energy and construction of nuclear power plants, so also in agriculture and railways.

Interestingly, Omar Al-Bashir has offered to help Russia in Africa. He said that “Sudan has extensive ties in Africa and can help Russia develop relations with African countries. Sudan may become Russian’s key to Africa. We are a member of the African Union.”
“We have great relations with all African nations and we are ready to help. We are also interested in developing relations with BRICS,” he concluded assertively.

Ahead of Sudanese leader’s visit, H.E. Mr. Nadir Babiker, Ambassador of Sudan in the Russian Federation, explained to me in an interview that his country was considering promoting small and medium-scale businesses as part of strengthening economic cooperation between two countries.

“Actually, we are focusing on the small and medium scale business, because it satisfies our requirements for the transfer of technology, and there is a mutual desire from both sides to cooperate in this field. We have been visiting different regions in the Russian Federation, to extend cooperation with industries in these regions,” Babiker told Buziness Africa in Moscow.

Sudan’s Minister of Minerals, Hashim Ali Salim, said that Sudan wants Russian companies and investors to contribute to the development of its mining industry. “There are now 35 metal reserves in Sudan, but only 13 are mined. We call on all companies to invest in other metals, in their extraction and processing. Doors are open to all Russian companies,” Salim said.

Vladimir Putin told his counterpart and his delegation that cooperation in all these areas was possible and the visit would mutually benefit both countries.