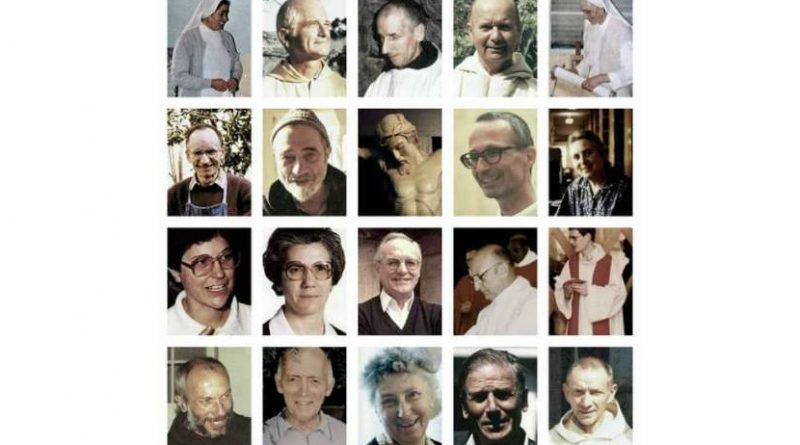 Pierre Claverie and his 18 companions, who will be beatified in Oran, Algeria, Dec. 8, 2018. Courtesy Eglise catholique d'Algerie.

Ahead of the beatification Saturday of Bishop Pierre Claverie and his 18 companions, who were martyred in Algeria between 1994 and 1996, Pope Francis said martyrs have a special place in the Church.

“The Church has always paid special devotion to the martyrs, who have faith and love for the Lord Jesus, even to the shedding of their blood as witness,” he wrote in a letter to Cardinal Giovanni Angelo Becciu.

Prefect of the Congregation for the Causes of Saints, Becciu, as the pope’s envoy, will celebrate the Dec. 8 beatification of the 19 Algerian martyrs at the Shrine of Our Lady of the Holy Cross in Oran.

In his letter, composed in Latin, the pope recalled the suffering and persecution experienced by Christ, quoting his words to his disciples that “a servant is no greater than his master. If they have persecuted me, they will also persecute you.”

These words have been confirmed throughout time and place in the persecution and martyrdom of Christians, he continued.

“Persecutions are not a reality of the past,” he said, quoting his 2018 apostolic exhortation Gaudete et exsultate, “for today too we experience them, whether by the shedding of blood, as is the case with so many contemporary martyrs, or by more subtle means, by slander and lies.”

He also said that “at other times, persecution can take the form of gibes that try to caricature our faith and make us seem ridiculous.”

But Christians should not be afraid of persecution, Francis said, because Christ told his followers that “all power in heaven and on earth has been given to me. […] And behold, I am with you always, until the end of the age.”

The death of these 19 martyrs has acted like a seed planted in the desert, and “the seeds have sprouted,” resulting in the growth of virtues, Francis said. The martyrs loved eternal life more than death, and now “they possess what they loved, and they will possess it even more fully at the resurrection of the dead.”

Pope Francis authorized the Congregation for the Causes of Saints to recognize the martyrdoms in January.

Bishop Claverie, who was a French Algerian and the Bishop of Oran from 1981 until his Aug. 1, 1996 martyrdom, is one of the future blesseds. He and his companions were killed during the Algerian Civil War by Islamists.

The best known of Claverie’s companions are the seven monks of Tibhirine, who were kidnapped from their Trappist priory in March 1996. They were kept as a bartering chip to procure the release of several imprisoned members of the Armed Islamic Group of Algeria, and were killed in May. Their story was dramatized in the 2010 French film Of Gods and Men, which won the Grand Prix at the Cannes Film Festival.

After the death of the monks of Tibhirine, Bishop Claverie knew his life was in serious danger. A bomb exploded at the entrance of his chancery Aug. 1, 1996, killing him and an aide, Mohamed Bouchikhi.