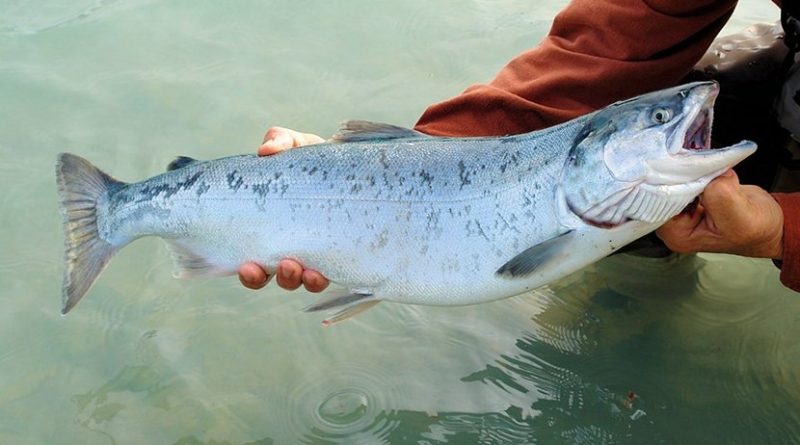 Children in Alaska whose diet includes a lot of fish from rivers fed by the Eastern Alaska Mountain Range may have a long-term elevated risk for cancer because of insecticides — including DDT — in the meltwater.

Even with low levels of organochlorine pollutants (OCPs) in glacial meltwater, the risk of cancer for youth and adults who rely on fish as a staple of their diet is above the Environmental Protection Agency’s threshold limit, says Kimberley Miner, research assistant professor at the University of Maine Climate Change Institute.

The risk to children exposed to DDT and hexachlorocyclohexane accumulated in fish is significantly higher than it is for adults, though, because of their size and lifetime exposure.

As Alaskan glaciers melt in the warming climate, Miner says the gradual release of these OCPs may continue to elevate watershed concentrations above the current level.

“This secondary impact of climate change will be felt most strongly by children, and needs to be addressed in a comprehensive way,” says Miner, who’s also a research fellow with the Center for Climate and Security and a physical scientist at the Army Geospatial Research Laboratory in Virginia.

The findings are in the article “A screening-level approach to quantifying risk from glacial release of organochlorine pollutants in the Alaskan Arctic” in the Journal of Exposure Science and Environmental Epidemiology.

There are 1,655 families in the larger Yukon interior region and 508 families within the Tanana River watershed. Miner recommends that people who eat large amounts of fish (more than 20 pounds per year or 6 ounces per week) in these and other Arctic areas be a priority for future research about risks from glacial meltwater pollution.

Health risks from drinking Jarvis Glacier meltwater are negligible for adults and children at this time, she found.

Pesticides that contain OCPs have been banned in many countries because exposure to them has been linked to cancer, coma, tremors, confusion, fatigue, headache, nausea, blurry vision and death.

DDT was used as a pesticide for insect control in the U.S. until the EPA banned it in 1972. Hexachlorocyclohexane, commonly called Lindane, has not been produced in the U.S. since 1976, but it’s imported for insecticide use and is in prescription creams that combat lice and scabies.

The OCPs deposited and stored near the surface of Jarvis Glacier in interior Alaska likely were transported there in the atmosphere — attached to snow and rain. In Asia, DDT is still used to try to prevent malaria.

They analyzed Jarvis Glacier ice cores and meltwater collected in summer 2016 and spring 2017.

Miner’s article about pesticide pollutants she discovered in the remote Alaskan glacier and its meltwater — “Organochlorine Pollutants within a Polythermal Glacier in the Interior Alaska Range” — was published in August in the journal Water.