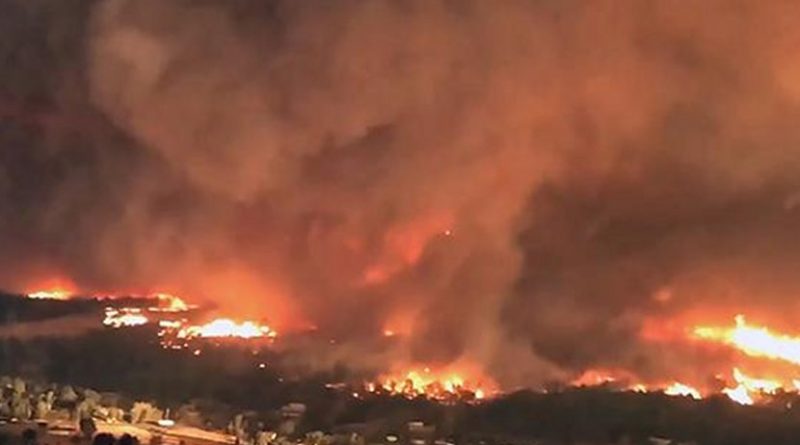 Atmospheric sciences professor Neil Lareau, of the University of Nevada, Reno, documented this atmospheric phenomenon, a firenado, at the Carr Fire that devasted the region surrounding Redding, California in July. Credit: Photo courtesy of CalFire.

A destructive fire-generated vortex – a massive stream of rising, spinning, smoke, ash and fire – that topped out at 17,000 feet above the earth, accelerated the Carr fire that killed eight people and devastated a widespread area in the Redding, California region in July 2018. The vortex, a little-observed atmospheric phenomena, was spinning with the power of a class three tornado, which earned it the name of Firenado.

Atmospheric scientist Neil Lareau at the University of Nevada, Reno has authored a paper in the scientific journal Geophysical Research Letters documenting the rare firenado, finding a number of factors that combined at just the right time and place to catalyze the deadly fire. These observations may help forecasters and scientists identify – and potentially warn – for future destructive fire-generated vortices.

“This paints a clear picture of the sequence of events leading to the vortex development and intensification,” Lareau said. “This sequence suggests the Carr Fire vortex may qualify as pyro-genetic tornado, and not merely a tornado-strength fire-generated vortex.”

In his study, satellite and radar observations document the evolution of the vortex revealing similarities to tornado dynamics. A key factor in the vortex formation was the development of a fire-generated ice-topped cloud (known as a pyro-cumulonimbus) which reached as high as 39,000 ft. The development of the cloud helped stretch the underlying column of air, concentrating the rotation near the surface and causing the tornado strength winds, estimated at 143 mph, the strength of an EF-3 tornado.

Radar data show that the vortex formed along the fire perimeter and within a pre-existing region of wind shear immediately following rapid vertical development of the convective plume, which grew from four to eight miles high in just 15 minutes. The plume development was fueled by the onset of the pyro-cumulonimbus cloud, a process similar to the development of an ordinary thunderstorm. It is this link to the cloud aloft that distinguishes the Carr fire vortex from more frequently observed fire-thirls, which tend to be smaller and less intense. The only other documented case of a “firenado” is during the Canberra Firestorm of 2003 in New South Wales, Australia

The data in the study came from National Weather Service NEXRAD radars located at Beale Air Force Base, in northern California, Eureka, California and Medford, Oregon. While radar data has been used to study many other wildfires with pyro-cumulonimbus clouds, this is the first instance of NEXRAD radars observing the structure and evolution of a tornadic fire-generated vortex itself.

Other factors contributing to the firenado include:

The Carr Fire, which burned in Shasta and Trinity Counties, started July 23 after a tire blew out on a trailer and the rim made sparks on the pavement. It went on to burn 230,000 acres – 359 square miles – making it the seventh largest fire in California history. It was 100 percent contained by August 30.

The fire resulted in eight fatalities and destroyed 1,079 residences. Following ignition, the fire was initially terrain driven, spreading uphill from July 23 to July 25. Then, on July 26, the fire became wind-driven, advancing rapidly eastward and downhill into the western suburbs of Redding. The fire jumped the Sacramento River, and on the evening of July 26 the large fire-generated vortex formed along the northeastern flank of the fire. The fire-generated vortex was directly related to four deaths, numerous injuries and substantive loss of property.

“With the impacts from this fire, a discussion and studies are warranted about the potential to warn for future tornado-strength vortices,” Lareau, an assistant professor in the Physics Department of the College of Science, said. “In this case, the availability of high resolution radar and satellite observations provide advance indications for vortex formation such that watches, or even warnings, may have been possible.”

In the future, Lareau said, the operational meteorological and fire-fighting communities might develop routines to carefully inspect radar data for evidence of shear or rotation in wildfire plumes, and satellite data for indications of fire-cloud formations and storms.