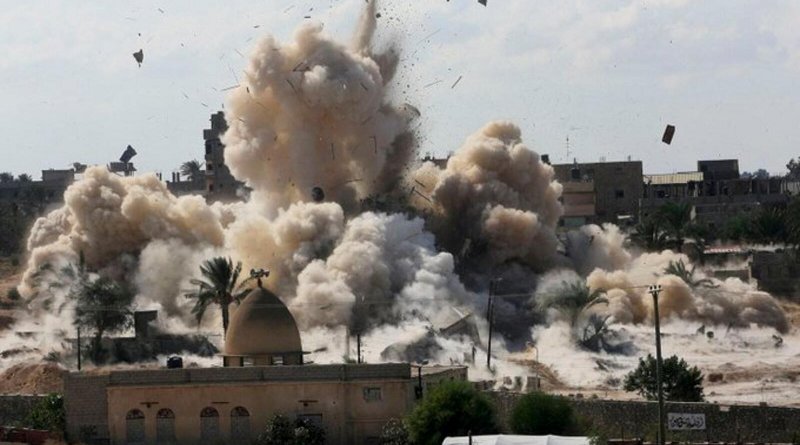 At least four Egyptian soldiers were killed on Sunday morning in North Sinai, in two simultaneous attacks thought to have been carried out by Wilayat Sinai, the Islamic State-affiliated militant group waging a violent insurgency in the desert peninsula.

Dozens of explosions were heard in the cities of Rafah and Sheikh Zuweid, following attacks on military and security targets, tribal sources and eyewitnesses told The New Arab’s Arabic-language service.

Militants tried to storm the Central Security camp at Al-Ahrash near Rafah, which they have attempted to attack several times in the past week, the sources said.

The group simultaneously carried out an ambush on a military vehicle in Sheikh Zuweid.

Medical sources at Al-Arish Military Hospital said that the bodies of four soldiers, including an officer, arrived at the hospital on Sunday following the attacks. It was not reported how many soldiers were killed in each attack.

Several others had been seriously wounded.

Egypt launched retaliatory airstrikes on Rafah and Sheikh Zuweid, but did not report any casualties.

Egypt has for years been fighting an insurgency in North Sinai that escalated after the military’s 2013 ouster of Islamist president Mohamed Morsi following mass protests.

In February 2018, the army and police launched a nationwide operation against militants, mainly focused on North Sinai.

The operation has been accused of violating the rights of Sinai residents, the majority of whom are Bedouin communities who already face marginalisation from the Egyptian state.

Security forces have also engaged in a campaign of home demolitions in the Sinai, destroying over 3,000 homes and commercial properties, an anti-terror strategy Human Rights Watch has called a “self-defeating security plan” that “inflict[s] pain on Sinai residents”.

The military operation also targets other areas including the Western Desert along the porous border with Libya.

The latest army figures brings the death toll of suspected militants in the Sinai region to more than 830.

About 60 security personnel have been killed since the start of the offensive.