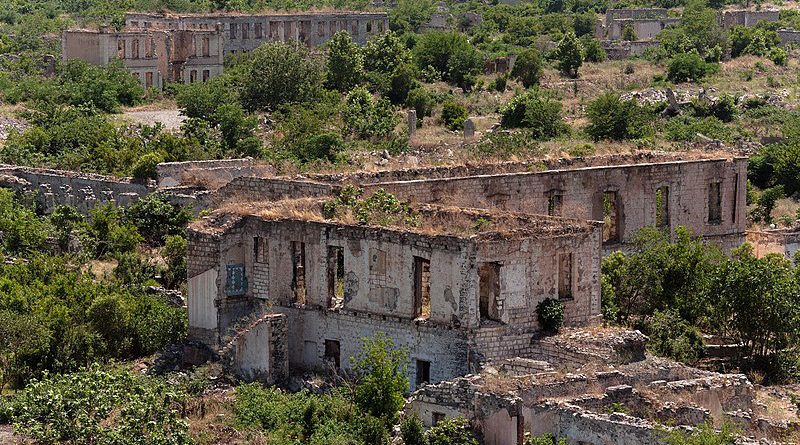 Economic damage in the formerly occupied territories of Azerbaijan remains the key overlooked issue in the Armenia-Azerbaijan conflict; the UN estimate of such economic damage is about $53.5 billion. As the military conflict is over now, there is an urgent need for the UN to establish a compensation commission to deal with claims for damages to infrastructure and properties of almost 800.000 internally displaced persons. Economic justice shall be as essential as other core issues for a final peace between the two nations.

Twenty-six years of ceasefire since 1994 was broken in late September 2020 and Armenia and Azerbaijan engaged in a bloody war of unprecedented intensity. The fighting lasted six weeks and ended with the signing of an armistice agreement between the two nations and Russia on the 10th of November, 2020. According to the trilateral Joint Statement, the parties agreed, among others, to cease all military operations, allow the return of displaced persons, Armenia agreed to a phased withdrawal from the designated Azerbaijani occupied districts, and Russian peacekeepers were introduced to monitor the ceasefire. It is unclear whether there will be detailed talks for a comprehensive peace deal or this is the final Russian-imposed peace on the parties.

As Armenia returned the occupied districts around Nagorno-Karabakh to Azerbaijan’s control under the Joint Statement, the President of Azerbaijan Mr. Aliyev emphasized that Azerbaijani government conducts a comprehensive assessment of pecuniary and moral damage, and will seek reparations from Armenia for economic damage in the formerly occupied territories. Preliminary estimates of such economic damage range from $53.5 billion to $100 billion. The outcome of this upcoming legal and political battle will be consequential not only for Armenia and Azerbaijan, but also for the whole South Caucasus region, which experienced numerous conflicts, destruction of infrastructure and personal property with impunity in the past 30 years.

Named as Europe’s longest-running conflict, this protracted conflict is over Armenia’s territorial claims to the Nagorno-Karabakh region, an internationally recognized part of Azerbaijan with a majority ethnic Armenian population, and seven adjacent districts, which it occupied in the 1991-1994 war, making about 800.000 Azerbaijanis into internally displaced persons (IDPs). Peace negotiations between the parties under the auspices of the OSCE Minsk Group in the past 26 years failed to produce a final agreement. The plight of IDPs still remains a major humanitarian, social, and important political issue for Azerbaijani society.

One of the key overlooked issues in the Armenia-Azerbaijan conflict has been the question of reparations for economic damage in the formerly occupied territories and due compensation for IDPs who lost their property as a result of the occupation. In 2000, the United Nations’ Human Development Report estimated the total economic damage to Azerbaijan from Armenia’s occupation of Nagorno-Karabakh and adjacent seven districts to be about $53.5 billion. This included estimated economic damage resulting from the number of occupied cities, districts, and villages; the number of IDPs, killed and wounded persons and their associated costs;  the loss of industry, infrastructure, fertile agricultural land, felled forests, etc. In 2005 and 2010, the Organization for Security and Cooperation in Europe’s (OSCE) fact-finding missions to the occupied Azerbaijani territories reported stark evidence of the disastrous consequences of the Nagorno-Karabakh conflict where they found towns and villages that existed before the conflict were abandoned and almost entirely in ruins. In 2008, the UN General Assembly adopted a special resolution on the “Situation in the occupied territories of Azerbaijan”, which reaffirmed the economic damage and illegal settlement policies in these territories.

As an illustration of this unfortunate state of affairs, a well-known British expert on this conflict Thomas de Waal witnessing the extensive destruction in the Azerbaijani city of Aghdam called it the “little Hiroshima”. A U.S. diplomat witnessing the same scenes in the city of Aghdam called it the “largest Home Depot on the planet” as all the buildings in the occupied territories were stripped clean by Armenians for building supplies. For a small country like Azerbaijan, the economic and social cost of the occupation has been immense, and since 1994 this issue continues to be a real impediment to Azerbaijan’s economic and human development.

Ironically, the question of reparations and compensation for IDPs did not receive a proper consideration in the peace negotiations in the past 26 years. For instance, this issue was wrongly not included as one of the core terms in the “Basic Principles” framework, the peace package proposed by the OSCE Minsk Group for a comprehensive resolution of this conflict. Given the scale of economic damage and number of a million potential claimants, reparations should become one of the core principles of a comprehensive settlement between the parties in the future; otherwise, this may leave more than 800.000 IDPs vulnerable and uncompensated, and significantly delay their return and reconstruction of the previously occupied territories. Most importantly, Armenia shall be held accountable for the economic consequences of its unlawful actions in the de-occupied territories of Azerbaijan.

There is no internationally enforceable mechanism to deal with reparations for economic damage in conflicts. Neither Azerbaijan nor Armenia accepted the jurisdiction of the UN’s International Court of Justice to deal with such inter-state claims. At the European level, however, Armenia’s responsibility for property damage to Azerbaijani IDPs was recognized by the European Court of Human Rights (“ECHR”) in its landmark case of Chiragov and Others vs. Armenia where the court ordered Armenia to pay compensation for violating property rights of seven Azerbaijani Kurdish families who were expelled from the district of Lachin captured by Armenia in 1993. The Chiragov family is just one out of an estimated 150.000 Azerbaijani registered property owners of IDP background who lost their property due to Armenia’s occupation in the 1991-1994 war. However, the ECHR’s financial redress to IDPs for property and moral damage is significantly limited and does not extend to the recovery of economic damage to general infrastructure destroyed or appropriated during the conflict.

Thus, considering the extensive scale of property damage and number of potential claimants estimated to exceed one million, the UN should create an international commission for both property and infrastructure claims arising from the Armenia-Azerbaijan conflict similar to the UN Compensation Commission for Iraq and Kuwait. For instance, the Commission issued compensation over $50 billion for the damage to Kuwait’s economy and citizens in 1990-1991. Given such rich institutional experience and legal precedents, establishing a specialized international commission to deal with compensation claims for infrastructure and personal property rights of IDPs from both Azerbaijan and Armenia could provide more effective and timely redress to this critical issue. In the absence of a workable international compensation mechanism, it would be extremely hard to advance negotiations  between the two countries with a view to achieving a comprehensive and sustainable peace.

For a small country like Azerbaijan, reconstruction costs of physical infrastructure – utilities, roads, housing, schools, medical facilities, energy and telecommunications, government buildings – in the de-occupied territories is beyond its means to rebuild, despite its oil revenues. There is an urgent need for an updated assessment of damage by the UN or EU Agency for Reconstruction and significant international humanitarian and financial assistance to Azerbaijan.

The absence of state responsibility for targeting civilian infrastructure in conflicts in the past has created a sense of impunity in a volatile region like the South Caucasus. The outcome of Azerbaijan’s pursuit of reparations and lawsuits against Armenia for damages in the de-occupied occupied territories running into billions of US dollars could make a positive precedent for post-war reconstruction efforts and also become an effective deterrence for all states in this volatile region in the future.

*Nurlan Mustafayev is a Baku-based specialist in international law and public administration. He works as an advisor on legal affairs and corporate governance at the State Oil Company of the Republic of Azerbaijan (SOCAR).  His views are his personal view and do not represent that of his employer.   Twitter @nmustafayev

Home » Reparations And Economic Justice For IDPs: Essential For Success Of Settlement Of Armenia And Azerbaijan Conflict – OpEd

2 thoughts on “Reparations And Economic Justice For IDPs: Essential For Success Of Settlement Of Armenia And Azerbaijan Conflict – OpEd”