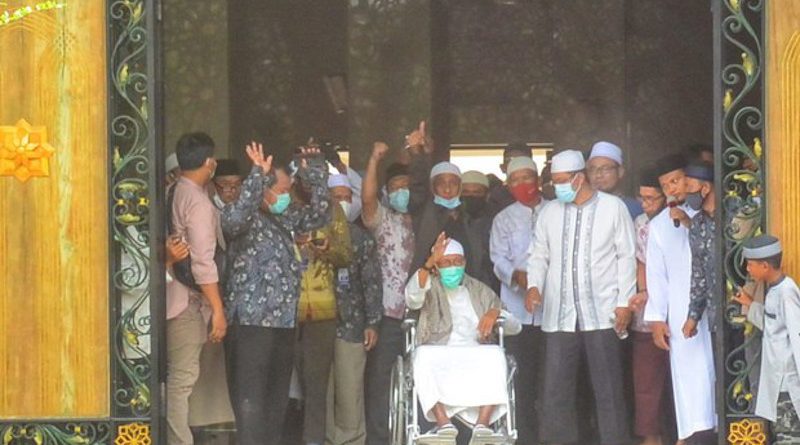 Cleric Abu Bakar Bashir waves from a wheelchair upon arriving at the Al Mukmin Islamic Boarding School where he resides near Solo, Indonesia, after his release from prison on terror-related charges, Jan. 8, 2021. Photo Credit: Kusumasari Ayuningtyas/BenarNews

Radical cleric Abu Bakar Bashir, a co-founder of the group blamed for Indonesia’s deadliest terrorist attack, returned home to his Islamic boarding school in Central Java upon being freed Friday after almost a decade behind bars on militancy-related charges.

The former spiritual leader of al-Qaeda-linked Jemaah Islamiyah (JI) left a maximum-security prison in Bogor, south of Jakarta, in a van in the early morning, a spokeswoman for the Directorate General of Corrections said.

“He was in good spirits and good health,” Rika Aprianti told reporters, adding that members of the Densus 88 anti-terror police unit and the National Counterterrorism Agency (BNPT) escorted the 82-year-old Bashir during the drive home.

Bashir did not issue any statements in the hours after he returned to the Al Mukmin school in his hometown of Sukoharjo, near the city of Solo, in the afternoon. He had served nearly 10 years of a 15-year sentence for funding a militant training camp, and was freed after authorities cut 55 months off his term for good behavior.

The cleric wore a mask to guard against COVID-19 as he sat in a wheelchair and waved to supporters and reporters from the entrance to the boarding school.

Authorities never proved a link between Bashir and the Bali bombings that killed 202 people – mostly foreigners – in October 2002. Eighty-eight of the victims of the twin attacks were from neighboring Australia.

“It’s still raw after all of these years later,” Australian Prime Minister Scott Morrison said during a press conference in Canberra on Friday, when asked to comment about Bashir’s release.

“[T]his is very distressing to the friends and families of the Australians, the 88 Australians who were killed in the Bali bombings of 2002. I still remember that day very vividly, like I’m sure many Australians do,” he said, according to an official transcript.

He and his predecessors, the PM said, had always called for the perpetrators of those attacks “to face tougher, proportionate and just sentences in these cases.”

However, Bashir’s release was a matter of the Indonesia’s justice system, and Australia would “have to respect the decisions that they take,” Morrison said.

“We have made clear through our Embassy in Jakarta the concerns we have that such individuals be prevented from further inciting others,” the prime minister added.

JI, al-Qaeda’s affiliate in Southeast Asia, was also blamed for a series of other deadly bombings across the archipelago-nation in the 2000s. Authorities accused Bashir of inciting JI militants to carry out such attacks.

In 2011, after cleric’s arrest the previous year, a court convicted him of helping fund a training camp for Islamic militants in Aceh province and inciting extremists to carry out attacks.

In 2018, the government announced that Bashir would be released unconditionally, citing poor health and advanced age, but it later backtracked and said he could be paroled if he signed a pledge of allegiance to the state ideology known as Pancasila – a condition which he rejected.

Officials at the Islamic boarding school Al Mukmin, which Bashir ran before his imprisonment, said they did not organize a homecoming party for him to prevent a large crowd that potentially could spread the coronavirus disease.

“It feels special because I was married by him,” said Dwi Lestari, 46, who owns a food stall near the school.

“The banners didn’t contain any provocative words, just expressions of gratitude for the homecoming of the person we respect,” Endro told BenarNews.

“Our family will do our best to keep him away from any extremist thinking, or any ideas that are beyond the pale, be they ISIS or non-ISIS,” Rohim told BenarNews, using another acronym for the Islamic State (IS) group.

Authorities had accused Bashir of pledging allegiance to IS in 2014, but his spokesman said at the time that the cleric was merely expressing support for the creation of an Islamic caliphate in Indonesia, the world’s most populous Muslim-majority nation.

A lawyer for Bashir, Achmad Michdan, said his client was in good health and had tested negative for COVID-19 before being released.

Michdan said Bashir would not receive guests during the pandemic.

“His two sons told him a lot about Solo and the changes it has undergone. He will spend time with his family first,” Michdan told reporters.

A terrorism expert and former JI member, Sofyan Tsauri, said Bashir tended to support IS because he relied on information from Abu Walid, an IS recruiter from Solo who had studied at Bashir’s school.

“He didn’t listen to Abu Tholut, who was affiliated to al-Qaeda,” said Sofyan, referring to a fellow inmate who Bashir met while incarcerated.

Abu Walid (also known by the alias Mohammed Yusop Karim Fais) whose real name was Muhammad Saifuddin, was designated as a “global terrorist” by the United States. He was killed in Syria in January 2019, according to the BNPT.

Saifuddin was said to be a close aide to Abu Bakar al-Baghdadi, the top leader of IS, who later killed himself during a raid by U.S. special forces in the Syrian province of Idlib in October 2019.

While in prison, Sofyan said, Bashir had little access to his family and was surrounded by fellow inmates who had pledged allegiance to IS.

“After homecoming, I am sure, Iim [Rohim] and Rosyid will be able to look after their father. They will surely find ways to keep people from meeting him,” Sofyan said, referring to Bashir’s sons.

Earlier this week, Sidney Jones, director of the Institute for Policy Analysis of Conflict (IPAC), a Jakarta think-tank, said that Bashir no longer had a relationship with Jemaah Islamiyah.

“Whether he is still pro-ISIS or not, he will still be seen as the elder of the extremist movement, and not only by one organization but also all of them, because he is seen as a person who has contributed a lot to the movement,” Jones said.

“We hope that people or groups who are still sympathetic to radical ideology will rethink the concept of jihad,” Irfan said in a statement to BenarNews.

Bashir would be placed into a de-radicalization program to instill nationalism, Irfan said, as he urged the public not to stigmatize the elderly cleric.

“His family plays a big role in supporting him,” Irfan said.

Meanwhile, Masduki Badilowi, deputy secretary general of Nahdlatul Ulama (PBNU), the country’s largest Islamic organization, called on Bashir to give sermons that would not provoke violence.

“Of course, we hope he can return to preaching, but with peaceful messages,” Masduki told BenarNews.