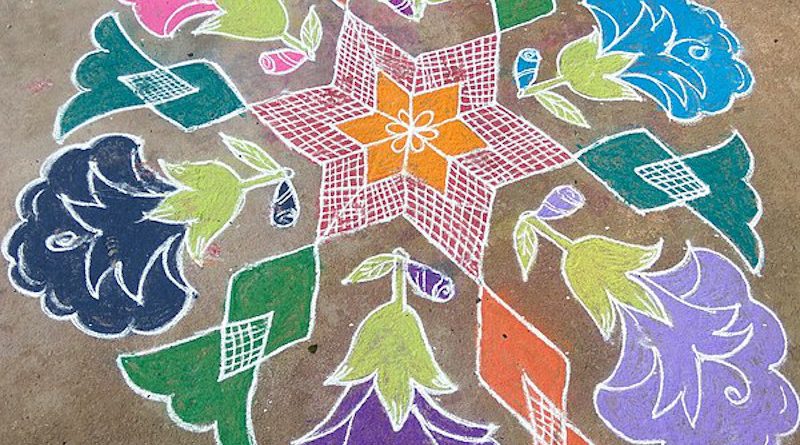 The month of Margazhi (mid-December to mid-January) is the most auspicious month for the Tamil Hindus scattered across the world. Margazhi is derived from the Sanskrit word Margashira.  All sections of Hindus – Saivites, Vaishnavites, and Smarthas – celebrate various festivals in the month with intense devotion and actively participate in the pujas in the temples. Early in the morning, before sunrise, women, after a bath, draw colorful kolams (Rangolis) before the house.

The place, where Kolams are drawn, is sprinkled with water mixed with cow dung and sanctified. In Besant Nagar, in South Madras, where I live, it is a pleasant sight to see young girls, after customary bath and wearing clean clothes, thronging the temples, recite Thiruppavai and Thiruvampavai, and finally partake prasadams which consist of Ven Pongal and Sakkara Pongal. In the 1960s when I used to live in Karol Bagh in New Delhi, before sunrise, I could hear Hindu devotees, unmindful of the cold, walking through the streets singing sacred songs.

Tamil Nadu, from very early times, had two important Bhakti movements. The saints who worshipped Siva were called Nayanmars and those who worshipped Vishnu were called Alwars. The story of 63 Nayanmars is chronicled in Periya Puranam. They travelled throughout Tamil Nadu, visited important Siva temples, and composed songs in praise of each temple. The work of Thirunavukkarasar is called Thiruvasagam.

Thiruvampavai is part of Thiruvasagam and was composed in the temple town of Thiruvannamalai during the month of Margazhi. Unmarried girls would get up early in the morning, have a bath, and sing and dance with their friends. They observed Pavai Nombu for ten days before Thiruvadirai nakshathram, praying for good and loyal husbands and happy married life. An atmosphere of sanctity and devotion prevails in important Siva temples in Tamil Nadu – Kapaleeshwarar temple in Mylapore in Chennai, the temple of God Nataraja in Chidambaram, Arunachaleshwar temple in Thiruvannamalai, and Meenakshi-Sundareshwarar temple in Madurai, to mention a few. Thiruvampavai is sung with intense devotion by the devotees.

Marghazhi is the coolest season of the year and it provides a congenial atmosphere for religious festivities. The days are shorter and the nights longer. Unfortunately, for strange reasons, marriages are not celebrated in this month nor do people change their houses.

It was in the month of Margazhi that God Krishna gave Geethopadesa to Arjuna. God Krishna said to Arjuna, “Among the months I am Margazhi”. In all Vishnu temples, special poojas are conducted which begin before sunrise. The devotees sing Tamil hymns from Thiruppavai of Andal, daughter of Periazvar; each day one verse of Tiruppavai is sung. Thiruppavai has a collection of 30 hymns. People throng the famous Vishnu temples in Sri Rangam and Sirivilliputhur. Andal, who wanted to merge with God Vishnu performed Pavai Nombu. Girls in Tamil Nadu observe Pavai Nombu to get good husbands and lead prosperous lives.

Arudra Darshan falls on the full moon night of the month when the Thiruvadirai (Arudra) star falls. It is the longest night of the year. It is considered most auspicious to visit the Nataraja temple in Chidambaram, where God Siva (as Nataraja) performs the cosmic dance. A special dish known as Kalee  is distributed to the devotees. Vaikunta Ekadasi also falls in Margazhi, when Swarga Vaasal is thrown open to the devotees, early in the morning. Vaikunta Ekadasi is celebrated in a grand scale  in Balaji temple in Tirupati and Ranganathaswami temple in Sri Rangam. The last day of the month of Margazhi is celebrated as Bhogi Pandigai when old things in the house are burnt to bring forth prosperity.

Throughout the world, Marghazhi has become famous because of the Margazhi music festival celebrated in Chennai, Coimbatore, and Madurai with pomp and splendor. It is a great honour for a budding artist to be invited to perform during the Margazhi festival. Music lovers from all parts of the world throng to Chennai during this season and it has given a boost to cultural tourism. Unfortunately, this year because of covid, the performances are telecast through the internet.

When I visited Thailand for the first time in 1978 I was pleasantly surprised that the country retains and takes pride in its cultural indebtedness to India. Let me start with a memorable meeting which I had the good fortune to attend in Chennai on June 25, 2019. The meeting was organized by Andal Bakthargal Peravai and Chennai Centre for Global Studies. The Guest of Honour was Phra Maharaja Guru Bidhsrivisudhigun, the religious adviser and preceptor to the King of Thailand.

The Rajguru performs the religious rites associated with coronation as a result of which the King acquires divinity and gets the title of Rama. The entourage of Rajguru consisted of four people, and they were all dressed in white dhoti worn up to the knees, with white buttoned up coat, and white shoes. What was striking about the entourage was their well-oiled kudumi (tuft) which proved that their ancestors originally came from Tamil Nadu. There are 14 Brahmins in Thailand today, they are highly respected, they keep alive the Hindu traditions, they are the unofficial ambassadors of India in Thailand.

While discussing India’s abiding cultural influences in Southeast Asia, permit me to narrate two facts. The greatest Hindu temple in the world today is not in India but in Cambodia. Angkor Wat, constructed by Suryavarman II in the 11th century, dedicated to God Vishnu, carries in architectural form Samudra Manthan, churning of the ocean. On one side are the Devas and on the other side are the Asuras. The rope is serpent Vasuki and the churning stick is Mount Meru. It must be highlighted that we in India, as far as I know, do not have Samudra Manthan depicted in any of the temples.

The predominantly Muslim country, Indonesia, takes pride in its Hindu heritage. President Sukarno was named by his father after the great Mahabharata hero Karna. The Government of Indonesia has issued several stamps featuring the heroes of Ramayana and Mahabharata. Indonesian Airlines is known as the Garuda Air Lines. Ramayana was translated into the Kawi language long before Kamba Ramayana was put into writing. The Central Bank of Indonesia is named after the Hindu God of Wealth Kubera. .Sage Agastya’s statues are found in different parts of Java. Hanuman is the official mascot of Indonesian Military Intelligence. In the 1977 Asian Games held in Jakarta, the official mascot was Hanuman.

Let us now turn to Thailand. As soon as you enter the country you are made aware of the Indian impact. The Bangkok International Airport is called Suvarnabhumi and there is a beautiful depiction of Samudra Manthan, adorning the walls of the airport. The name Siam is derived from the Sanskrit word Shyam. The Thai language is full of Sanskrit words, though it is pronounced differently. Ramayana and Mahabharata have formed the basis of great literary works in Thailand. The knowledge of Ramkein (Thai version of Ramayana) is essential for a cultured Thai. Their legal system is based on Manusmriti.

The Government of Thailand has named some of the departments after the Hindu Gods. The Meteorological Department is named after Varuna. The Department of Fine Arts is named after Ganesa. Ganesa is also the emblem of Silpakorn University and the National Theatre. Outside the main building of Chulalongkorn University is the statue of Saraswathi, all in white, mounted on a swan.

From a Tamil Nadu perspective, what endears Thailand is the immense popularity of Thiruppavai and Thiruvampavai. In December-January, corresponding to Margazhi, Oonjal (swing) festival is celebrated with great gusto. Thai girls, all Buddhists, early in the morning, take bath before sunrise, place the image of Dakshinamurthy (Siva) in the swing and recite verses from Thiruppavai and Thiruvampavai so that they would be blessed with loving husbands.