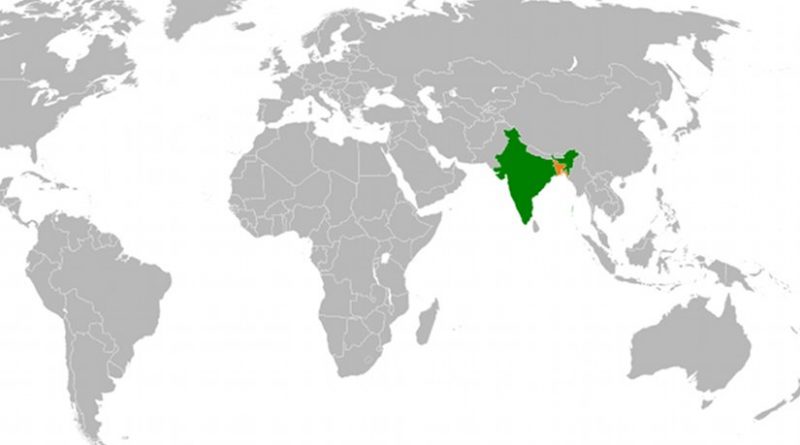 When India-Bangladesh relations took a positive turn following the Awami League forming the government after winning the December, 2008 elections, one wondered how long the euphoria will last. There were great hopes on both sides. Prime Minister Sk. Hasina’s January 2010 visit produced a joint declaration that had a lot of hopes. She displayed astute statesmanship, not hurrying to New Delhi for obvious reasons.

One had to keep fingers crossed, but yet prayed that a new awakening had dawned on both India and Bangladesh. The relationship between the two countries had been uneven and even abrasive, following the assassination of Sk. Mujibur Rahman in August, 1975 in Dhaka, by a group of young army officers. The period 2001-2006 under the BNP-Jamaat-e-Islami (JEI) rule, perhaps, witnessed the worst.

It is true that Pakistan acolytes in Bangladesh never forgave India for its role in the 1971 liberation war. That sentiment remains deep and cannot be eradicated in the near future. This is not an attribute only of the Islamic radicals and the JEI and its organizations. This weaves through whisky-drinking liberals who had and continue to have strong business connections with Pakistan, leftists who have been ideologically and politically pro-China, and some others who have found new reasons to be disappointed with India.

It must be pointed out also that the Indian policy on Bangladesh had many flaws. If Indian diplomats and policy-makers from different departments of the government thought the Bangladeshis should remain ever grateful to India for its role in 1971, they were sorely mistaken. People of every nation have their national pride, and the people of Bangladesh are very proud of their nation and culture. Sovereign nations must be dealt on equal terms, and a big neighbour should, at times, accord special privileges to the smaller one.

That has not been happening, especially in trade and commercial exchanges and some other related areas. At the same time, it must be admitted that the Indian government machinery is still slow in moving. The Ministry of External Affairs (MEA) can do only so much. It requires quick support from other ministries like the Ministry of Commerce, Foreign Trade, Water Transportations, and also from State Governments especially West Bengal. This is not necessarily due to mal intensions towards Dhaka. These disconnections which must be improved.

The Indian private sector could have done a lot in promoting relations with Bangladesh, Sri Lanka and others. But this sector remains mainly focused in the domestic economy and, to a small extent, in tested areas like South East Asia, the Gulf and the Middle East. Even that is on a very conservative scale. China scores over India in Bangladesh, because economic policies are state driven.

It is necessary, however, for New Delhi to take an urgent relook not only at creating a level playing field with Dhaka, but make special concessions of “friendship” economic and trade relations. This is critical and, today, India can afford it. At the same time, New Delhi must be prepared for criticism from the anti-India detractors in Bangladesh and leave it to Sk. Hasina and her government to deal with their internal contradictions.

India, however, cannot remain a mute spectator to unsubstantiated attacks by Bangladesh’s main opposition, the Khaleda Zia-led BNP and their partner, the JEI. There is need to engage with these parties diplomatically and call their bluffs.

India’s one billion dollar assistance to Bangladesh was, perhaps, at the lowest ever interest rate that Dhaka has received. It is known that a member in the Bangladesh Cabinet countered by assuring that he would get two billion dollars aid from China. Finally China proceeded with a $500 million package with interest rate higher than the Indian tranche. Even then, the usual suspects continue to snipe at the Indian tranche.

Prime Minister Manmohan Singh has always maintained the policy, even during the BNP-JEI rule in Dhaka, that India will be good to Bangladesh and hoped Dhaka would reciprocate. He has been true to his words all along, supplemented strongly by Finance Minister Pranab Mukherjee, whose contribution to improve relations has been immense.

But a major issue that can blow on India’s face is the killing of Bangladeshi smugglers by the Indian Border Security Force (BSF). True, there has been infiltration of terrorists from Bangladesh along the land borders. The “cattle traders”, as depicted in the Bangladeshi media, are not traders, but “smugglers”. There is no cattle trade agreement between India and Bangladesh. But they are small people and not fair game for the BSF bullets.

It is quite possible that the BSF personnel on the ground may be trying to take revenge against the Bangladesh Rifles’ (BDR) abduction of a BSF officer and his brutal killing and its exhibition in the media during BNP-JEI regime. Non-action by the BSF at that time does not justify their actions today.

What is of high significance is the recent killing of a 15-year old girl, Felani, at the Anantapur border, by the BSF. A girl from a poverty stricken family was returning to Bangladesh with her father from India, when she was caught in the border fencing. The BSF shot her dead, and her body was left hanging for five hours. To any one, this is a heinous human rights abuse.

Felani has become a martyr. The international media has reported on this case, and human rights organizations have taken note of the incident. Interested parties in Bangladesh have taken up the incident politically, charging the government that it was taking no action with India because it is serving the interest of the Indian government against those of its own people. The Indian Home Ministry must take quick action against the culprits.

While cross-border issues require urgent attention from both sides, recent developments in Dhaka suggest that some officials may be trying to cut at the roots of the new initiative in India-Bangla relations. As reported in the Bangladesh media, Dr. Moshiur Rahman, Economic Advisor to Prime Minister Sk. Hasina, had written a letter to Commerce Minister Faruk Khan, requesting a reassessment of the entire effect of granting transit facility to India, Nepal and Bhutan. In the same letter Dr. Rahman also suggested the need for amending the existing fees applicable to Indian cargoes under the protocol on inland water transit between Bangladesh and India. Almost immediately after this, Bangladesh refused an Indian proposal to renew the inland water transit agreement by five years, and extended it by one year only. In the meeting held on January 23-24 in Kolkata, the Bangladesh side cited several lapses on the Indian side which inconvenienced Bangladeshi ships and crew.

True, there would be lapses on the Indian side but not necessarily a deliberate act. The Bangladeshi officials are aware that even Indian ships and boats face many problems. There is, therefore, every reason to assume that the inland water protocol decision by the Bangladeshi team was linked to Dr. Rahman’s letter.

Returning to the transit issue, including Nepal and Bhutan along with India was just a formality. Dr. Rahman had a number of questions that the Ministry of Commerce was required to examine including cost-benefit analysis, environmental impact etc. But the main point was political impact which he allegedly put in phrase “negative externalities”, couched words which could include impact on Bangladesh’s security from India. This is exactly the line the BNP and JEI have taken – that transit to India will make Bangladesh vulnerable to India’s machinations.

The entire plans for this transit corridor was to join India, Nepal, Bhutan and Bangladesh to the Asian Highway, a project approved by the Asian Development Bank (ADB). The corridor would go through Myanmar to South East Asia, but would not directly enter China. On the other hand, Dr. Rahman is not to have raised similar question on the proposed road-way from China’s Yunan province through Myanmar to Chittagong port. Myanmar is yet to agree to this proposal, however, despite its close relations with China.

It is astounding for an economist like Dr. Moshiur Rahman ask about the financial losses that Bangladesh would incur due to heavy traffic movement as a result of this transit deal. He has taken this vital issue back to its initiation which many in Bangladesh see as a deliberate negative move after almost everything had been worked out.

Eminent Bangladeshi economist, Prof. Rahman Shoban, most recently castigated such perception as “illiterate thought”. Prof. Shoban explained that if the transit route joined India’s North East with the rest of the country, Bangladesh would gain immensely through trade with this region.

The issue of the transit corridor to India, Nepal and Bhutan has been thoroughly evaluated by the concerned Ministries and agencies in Bangladesh for more than a year now. This includes the benefit to and earning for the Chittagong and Mongla ports. It has been estimated that Chittagong would develop rapidly given the revenue that it would earn servicing India, Nepal and Bhutan.

If India is blocked, there could be repercussions from New Delhi. Any land connection of Nepal and Bhutan to Bangladesh would be through Indian territory and require India’s agreement. Talks and preparations are also on regarding both Nepal and Bhutan supplying power to Bangladesh, something the country requires direly for its economic development. The power transmissions would also have to be through Indian territory. At the end, of it Bangladesh would be a net loser. That would not only be unfortunate for Bangladesh but the entire contiguous region.

It would be pertinent to briefly revisit the strategic importance of North-East India. The region has been plagued with a variety of insurgencies and separatist movement for decades, though the majority of the population remained committed to the Indian Union. China has aided and fomented these insurgents and continue to do so. It is now common knowledge that Beijing has been arming the Naga and the Assamese separatists. Pakistan has been closely associated with China in this enterprise. Post-Mujibur Rahman governments in Bangladesh had co-operated with China, but the BNP-JEI government actively, and almost openly came on board to give all assistance to the Naga, ULFA and other secessionists, in co-operation with China and Pakistan. The strategy was to keep North-East India simmering with low intensity warfare, and intensify if the opportunity was available.

As BNP Foreign Minister Morshed Khan had said that if India encircles Bangladesh, Bangladesh also encircles India. It was not an off the cuff statement, but a well considered one as emerging facts reveal.

Among Prime Minister Sk. Hasina’s valedictory promises was eradication of terrorism. True to her word she broke the back bone of the terrorist organizations in Bangladesh. Most importantly for India, she uprooted the ULFA, NSCN and other anti-Indian insurgent groups enjoying de facto state hospitality under the BNP-JEI rule. This has blocked the Chinese supply line to these insurgents.

Having expended so much of her political bank balance, Sk. Hasina appears to be facing a negative move if not sabotage, from within her own political household. Her entire brain child for a sub-region of development of stability, amity and prosperity appears to be up against a new challenge. If the transit corridor fails, it will eclipse all that started in January, 2009.

(The author is an experienced analyst of South Asian region. He can be contacted at [email protected])