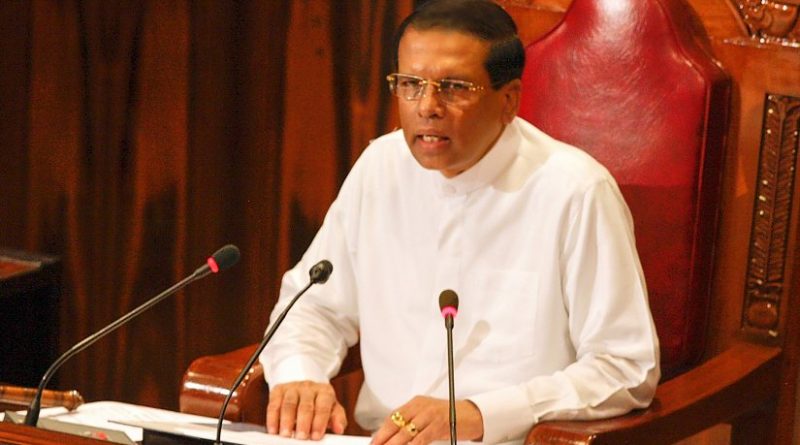 There has been intense criticism of President Maithripla Sirisena, elected in January 2015 and of the government of Prime Minister Ranil Wickremesinghe elected in August the same year, for taking too little action to prosecute massive fraud by incumbents of the former (Rajapaksa) regime, or to bring to book ‘royal family’ members for alleged murder and other crimes In the last two weeks, however, some arrests have been made and the Prime Minister also seems to be taking a tougher line against racism. (In India the cancer parallel to racism is called communalism).

One swallow does not a summer make, but then it is worth perking up at! At last the PM lashed out in Parliament on 28 January; he should have done it long ago but one has to be thankful that he did take a stand. Will he keep it up? Indications are encouraging; Galagoda Aththe Gnanasara Thero (a fire-breathing monk of the BBS extremist movement) and Yoshitha Rajapaksa (the former president’s second son) have been remanded for contempt of court and fraud, respectively. The murderers of Wasim Thajudeen (a popular rugby-footballer who is said to have crossed swords with the former president’s eldest son Namal) may be arrested. The PM has pledged that Lanka will honour its commitments to the UNHRC regarding trials for war crimes and human rights violations in the civil-war that ended in 2009. President Sirisena, however, has recently reneged on assurances his government gave the international community in Geneva in the fall of 2015.

Neither a PM nor anyone else can, single-handed, rout racism or fascism. That task is the duty of the people. Democrats, liberals, militant leftists with an ember or two left in their belly, working or middle-class, or even the bourgeois, everyone has a stake in halting a drift to racism, communalism or fascism. There is little that a PM can do to save a nation from such misfortune unless the people stand up and fight. This has been said a million times, and the more often said the truer it is! (“I know of no safe depository of the ultimate powers of society but the people themselves” – Thomas Jefferson).

There are two reasons why this has become more than a platitude at this conjuncture. One is to do with the state of decay that racism, bigotry and chauvinism have reached; the second is how steadfast the military’s loyalty to constitution and supremacy of the civilian is, and how sincere its commitment to human rights. These two matters need careful reflection.

Racism has done a circle

Racism has done a full circle in the last three generations and the opportunity is now ripe to tame it determinedly. This is not 1947-48 when the upcountry Tamils were ground into the dust; nor 1957 or 1965 when timid prime ministers reneged on the B-C and Dudely-Chelva Pacts; nor is it 1958 or 1983 when Lanka’s worst racial pogroms broke out and the government of the day – in 1983 both government and military – connived with the mobs. There has also been another watershed crossed in 2009 when Tamil separatism was wiped out and mass Sinhala psychology tranquilised.

Prime ministers SWRD Bandaranaike and Dudley Senanayake entered into solemn agreements with Tamil leader SJV Chelvanayagam in 1957 and 1965, respectively, to devolve a degree of power to Tamil areas. But they took fright at outbursts of Sinhala extremist wrathfulness and rampaging Buddhist monks and tore up the pacts. That was then. The correlations of domestic power and the impact of international pressures are different now; this government, if resolute, is in a position to strike down fanatics hell-bent on destabilising the country.

My assertion then is that times have progressed and Sinhala chauvinism is not the power it was from the 1950s to the end of the civil-war. In the aftermath of war victory there was a triumphal upsurge, but this was ephemeral; the quotidian imperatives to chauvinism have slackened and what is called deep rooted Mahavamsa (an ancient nationalistic chronicle) ideology has little hold on the minds of 21-st Century young people. I was pleased to hear the PM challenge the racists to bring their mobs on to the streets and promised to respond with 100 for every one they mobilised. I am confident that had the grand old guard of left leaders, NM Perera, Colvin R de Silva, Peiter Keuneman or Dr SA Wickremasinghe, been alive today, would not have hesitated to enter into united actions with Prime Minister Ranil against this racist-fascist menace.

The forces that can be mobilised against racial rabble are stronger now than in 1958, 1965 or 1983. The PM’s hard hitting line is welcome, but this is not what I am driving at. My case is that social, class and demographic factors at the grassroots of Sinhala society have evolved. Mafia-like brigandage of the Rajapaksas too has created revulsion against louts in yellow robes (don’t call them monks) who indulge in anti-Muslim or anti-Tamil obscenity “to save Sinhala-Buddhism from halal eaters, or to protect the army from imperialist orchestrated war-crimes probes”. Let me rub it in again; Sinhala chauvinism is no longer the all powerful social and political force it used to be.

The balance of forces has changed in other ways as well. Ranged against chauvinism is the united anger of all the country’s minorities. Colombo based ‘Jaffna’ Tamils are somewhat cowardly, but the Muslim population is young and will not stand for insult and injury. Upcountry Tamils to a man opposed Rajapaksa and those of that community settled in Colombo and the cities will act. The race-hate instigators in the SLFP’s Mahinda faction and their outside allies (Wimal Weerawansa, Udaya Gamanpila, Dinesh Gunawardena and ex-leftist Vasudeva Nanayakkara) know that in the event of confrontation the cards are stacked against them and refrain from stirring up unrest. It will take only one firm response to drive cowards off the streets permanently.

For three generations this nation has been sodden in the gangrene of racism. An opportunity has come, that comes but rarely in the life of nations, to extinguish the plague. If carried through it will be a transformation of monumental significance in the post-independence history of Lanka. Class collaboration, socio-economic compromise and foreign meddling to a degree, are prices worth paying to exorcise the fiend that has drenched this land in blood for seventy years. Lanka may be on the cusp of such a wave, let us not miss it. I said ‘may’, but the people must push if they want change. Push, encourage and watch purported anti-racists allies in government, the PM included.

Furthermore, the international climate is far different from decades ago. National sovereignty is no longer absolute anywhere, Middle East, South East or South Asia. There will be support from India and the West to deal with rampaging race mobs or conspirators in the military if it comes to such a pass that the survival of the Lankan state is in jeopardy. Beijing too, you will recall, did not shed half a tear over the demise of the Rajapaksa mafia outfit.

The danger point, in the event of commotions, is the military. Putting out a military that has not been thoroughly re-educated and whose officer corps retains old regime loyalists biding their time, is unsafe. Hasty cleansing of the officer corps core, except in revolutionary times, is tricky. Re-educating the rank and file into unquestioning loyalty to the constitution, accepting the supremacy of the elected civilian government and respect for ethnic and religious pluralism, takes time. This is the reason why I advocate mass mobilisation rather than reliance on the armed forces to repulse putative race rioters.

Instigation of racial and more frequently anti-Muslim disturbances has so far been on a small scale and the police have been able to deal with the incidents. The police force, mercifully, is not as tainted by human-rights abuses as the military, and fortunately its 80,000 men and women are enough to deal with sporadic incidents. The force conducted itself in a way that partly restored public confidence during the January and August 2015 elections. A senior officer has been convicted of murder and others are facing charges for corruption; there has been spring cleaning. Nevertheless the IGP and his senior staff have their work cut out in burnishing the force for what may be difficult times ahead when ratification of the new constitution and work the UNHRC mandated inquiry begin. A decent police force and mobilisation of the democratic masses is adequate to subdue enervated chauvinists if and when they dare venture out to arson, loot or worse.

The PM and the President

Although the PM is the more prominent source of power the residual powers of the President aren’t negligible. Last year I initiated the “Single Issue” idea (abolish the Executive Presidency) and despite leaders like the respected monk the late Sobitha Thero mobilising for it, the 20-th Amendment enacted in September fell short. The President retains a degree of real (not merely formal) power and in particular retains control of the armed forces. The President can call out the troops, but when there is civil disorder won’t his predecessor and the former Defence Secretary – both of whom retain some influence – be tempted to conspire with a rump? The arrest of Rajapaksa family members and old cronies is making the displaced regime desperate. The PM’s Collective Agreement a few days ago with former army commander Field Marshal Sarath Fonseka’s party, and the latter’s possible inclusion in Cabinet at a future date therefore make sense.

Nevertheless political stability is more important than this military technicality and in post Rajapaksa Lanka this depends on a crucial link: The rapport between Ranil Wickremesinghe and Maithripala Sirisena must remain strong. Anything that undermines this plays into the hands of the hounds of hell salivating in the corridors. Both are aware of the importance of the alliance, not just for themselves, but for the country at large. Should this government collapse any time in the near future all hell will break loose; that cannot be disputed.

A serious bone of contention at this juncture is: Should the UNHRC Geneva Resolution sponsored by Sri Lanka jointly with others last fall be adhered to? Some pronouncements of the President renege on this pledge and the PM seems embarrassed to repudiate the President. This dilemma must be resolved but it is also possible that PM and President are gaming. You play good cop, I play bad cop; Sirisena is good cop at home and bad cop to the outside world, Ranil reverses the roles. If this is by mutual agreement Sri Lanka, as usual, is likely to muddle through. However a commentator on the Groundviews website (Niran Anketell) writes on 1 February:

My argument throughout this essay has been that this cost is not prohibitive. Or perhaps the government’s calculation is somewhere quite different. Something like this: It is not possible to both punish the military for war crimes and grant powers (de facto devolution) to Tamil regions. The double portion may be too much for even an enervated Sinhala chauvinism to stomach. So could the thinking be; get constitutional changes done, but let the dead bury their dead. If that’s the deal on the table, what will the Tamils say? It’s a tantalising prospect.