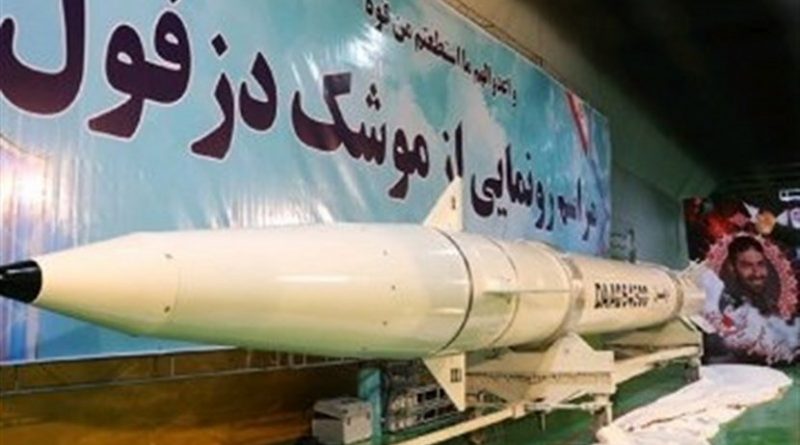 “Unveiling this missile production city deep underground is an answer to the idle talk made by the Westerners, who assume they can restrict us and dissuade us from (pursuing) our long-term goals by means of threats and sanctions,” Major General Mohammad Ali Jafari, the IRGC’s chief commander, said during the unveiling ceremony.

The ceremony, which was joined by the commander of the IRGC’s Aerospace Division, Brigadier General Amir Ali Hajizadeh, also featured the inauguration of a smart surface-to-surface missile dubbed Dezful.

“Today, the mass production of advanced precision and smart missiles became a reality within the IRGC’s aerospace force,” he said.

Elsewhere in his remarks, Major General Jafari said that Iran’s defense might is in line with the country’s deterrence doctrine and by no means open to negotiations.

“Iran’s defensive capability is deterrent (in nature) and in line with preserving its national security, and it cannot be subjected to any transaction or negotiation,” the commander stressed.

He said the country declares possession of full defensive might on the eve of the 40th anniversary of the victory of its Islamic Revolution.

Major General Jafari also addressed European countries’ demands from the country to start negotiations over its missile program before the Instrument in Support of Trade Exchanges (INSTEX) comes into force.

INSTEX is a non-dollar payment mechanism, which European countries have announced to safeguard trade with Iran in the face of the United States’ sanctions targeting the Islamic Republic.

Leader of the Islamic Revolution Ayatollah Seyed Ali Khamenei has reiterated on various occasions that Iran’s defense capabilities and power are not subject to negotiations.

“We will have no bargaining and dealing with the enemy over the country’s means of defense and over whatever provides or supports the national power,” Ayatollah Khamenei said in October 2017.

The adversaries are opposed to the enhancement of the Islamic Republic of Iran’s power in the region and beyond, because such power constitutes the “strategic depth of the Islamic Establishment,” the Leader said.

In November 2018, Ayatollah Khamenei said Iran’s enhanced military preparedness would frighten the foes and be deterrent against the enemies, underlining, “The Islamic Republic is not intending to begin a war against anyone, but you (the Iranian military forces) should boost your capabilities in such a way that not only the enemy would be fearful and afraid of attacking Iran, but also thanks to the solidarity, might, and effective presence of the Armed Forces, the specter of threats against the Iranian nation would be swept away.”