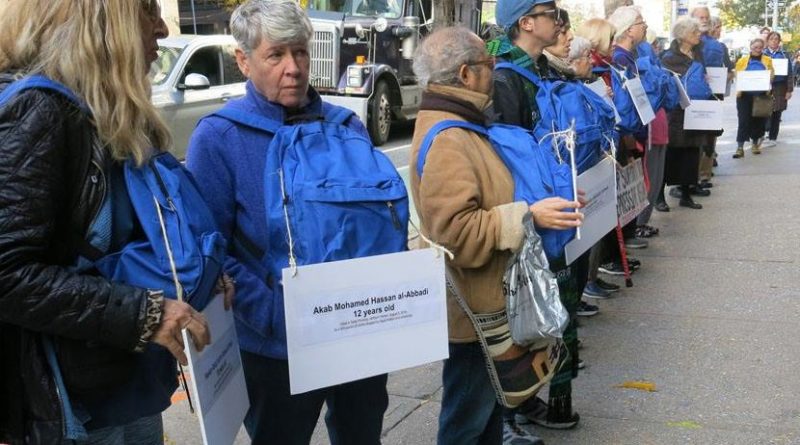 On January 2nd, 2019, eleven people from New York, New Jersey, Maine, Illinois and Iowa protested the the Saudi-led, U.S.-supported bombardment and siege of Yemen by nonviolently blocking the doors of the United States Permanent Mission to the United Nations at 799 United Nations Plaza in New York. Far outnumbered by officers of the New York City Police, the protestors were arrested and later released pending court appearances.

The protest was a part of “Fast for Yemen,” two weeks when participants fasted from solid food in solidarity with the people of Yemen suffering from the world’s worst famine in over a century and took part in daily protests and marches in New York City and in Washington, DC. Along with the US Mission, the fasters and their friends brought their protest to some of the other parties to war crimes in Yemen, to the missions or consulates of Saudi Arabia, Qatar, the United Arab Emirates, the United Kingdom, France and to the offices of Lockheed Martin.

The eleven defendants, Kathy Kelly, Joan Pleune, Alice Sutter, Manijeh Saba, Trudy Silver, Jules Orkin, Brian Terrell, Bud Courtney and Al Pereira, will appear in Criminal Court of the City of New York, 100 Center St., at 9:30 AM on Monday, February 25, to answer to charges of disorderly conduct. Carolyn Coe and Ed Kinane will be represented by an attorney.

By Wellton Máximo Female, graduated from high-school, aged 35 to 59 is the profile of the majority of electors voting