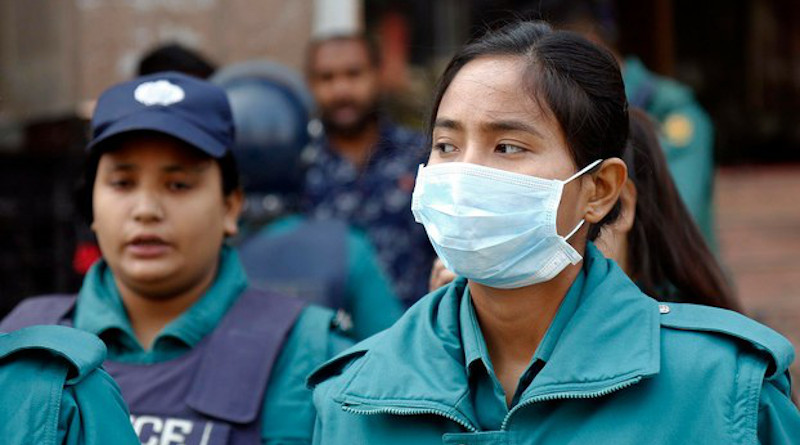 Bangladesh on Sunday announced the first cases of COVID-19 detected on its soil, joining nations grappling with the outbreak of the novel coronavirus that has now infected more than 100,000 people around the globe, according to the World Health Organization.

The Philippines meanwhile was moving to declare a public health emergency after confirming the first locally transmitted case, and as cases of infections in neighboring Malaysia were on the verge of breaking the 100 mark amid a surge in confirmed cases this past week.

The first three cases confirmed by Bangladeshi health authorities Sunday included two people who recently returned from Italy, a global hotspot of the virus that first broke out in China’s Hubei province.

“We have confirmed three cases of novel coronavirus in Bangladesh. Of them, two are men and the other is a woman,” Dr. Meerjady Sabrina Flora, director of the state-run Institute of Epidemiology, Disease Control and Research, told a news conference in Dhaka.

“Two of them came from Italy. The other patient is a family member of one of the infected persons,” she said.

Another three people suspected of being infected with the virus were under quarantine, she added.

The trio who tested positive for COVID-19 were being treated at a local hospital.

Health Minister Zahid Maleque assured citizens that the government was ready to protect the public from the viral threat spreading within the territory of the South Asian nation.

“We have adequate preparations to face the coronavirus. We have arranged quarantine facilities at all government hospitals even at the upazilla [sub-district] level,” the minister told BenarNews on Sunday.

“We urge people not to get panicked. Just maintaining cleanliness will help protect us from coronavirus infections,” he said.

Late Sunday, Bangladeshi officials announced that due to “the overall situation across the globe caused by the coronavirus outbreak,” they decided to rearrange a program of big celebrations to mark the 100th anniversary of the birth of the country’s founding father, Sheikh Mujibur Rahman (pictured below).

“We’ll hold the Mujib Year programs by making rearrangements, and we’ll conduct the programs across the country accordingly,” said Kamal Abdul Naser Chowdhury, the chief coordinator of the committee organizing the series of events around the celebration, according to Bangladesh Sangbad Sangtha (BSS), the state news service.

A grand ceremony scheduled at the national parade ground in Dhaka for March 17, the late founder’s birthday, would be held at a later date, and other commemorative programs would be observed while “avoiding massive public gatherings,” BSS quoted Chowdhury as saying.

Prime Minister Sheikh Hasina is the daughter of Mujibur, who was assassinated in a coup d’etat in 1975.

In Geneva on Saturday, the World Health Organization (WHO) announced that cases of COVID-19 had surpassed 100,000 worldwide.

As of Sunday, the number had exceeded 105,000 in at least 101 countries and territories scattered in six continents, with most cases concentrated in China, WHO said. At least 3,500 people have died of the disease worldwide, according to the latest information from WHO.

The U.N. agency marked the milestone of 100,000 cases as a “somber moment,” calling on leaders at all levels of society across the globe to step forward and commit to stopping the virus from spreading farther.

“We must stop, contain, control, delay and reduce the impact of this virus at every opportunity. Every person has the capacity to contribute, to protect themselves, to protect others, whether in the home, the community, the healthcare system, the workplace or the transport system,” WHO said.

In Manila on Saturday, Philippine health officials confirmed a sixth case of COVID-19 in the country. The patient was a 59-year-old woman married to the fifth case, a Filipino man who had not traveled outside the country recently but was the first confirmed case of a person infected through local transmission, officials said.

The Department of Public Health was “exhausting all its efforts to identify others who may have come into contact with the confirmed cases to ensure that this localized transmission does not progress to community spread,” Health Secretary Francisco T. Duque III said.

In early February, the Philippines was the first country outside China to record a death from the coronavirus.

In Kuala Lumpur on Sunday, Malaysian health authorities announced that there were six new cases, bringing the nationwide total to 99.

The six new patients were all part of a large cluster of COVID-19 cases recorded in recent days and who were connected to one patient, a 52-year-old Malaysian man who had visited China in mid-January, officials said according to reports.

And in Jakarta, the Indonesian health ministry announced Sunday that two more people, both Indonesian citizens, had tested positive for the virus, bringing to six the number of cases detected nationwide.

Reports said that one of the two new cases was a man in his thirties, who had worked as a crewmember aboard the Diamond Princess, a cruise ship docked in Japan that was hit hard by the virus. The other new case was a man in his fifties who was infected locally in Jakarta, Reuters quoted Health Minister Achmad Yurianto as saying.

The day before, Thailand reached a milestone as health authorities there confirmed two new cases, which pushed the nationwide total to 50.

Although Bangladesh until Sunday had not detected the virus within its borders, the country was already feeling an economic pinch from it, and at least seven members of the country’s massive overseas migrant workforce had tested positive for COVID-19 in Singapore and the United Arab Emirates.

During the outbreak the Bangladeshi ready-made garment industry, the engine of the nation’s economy, has suffered big losses that have yet to be quantified through actual numbers, industry sources told BenarNews last week. Global fears around the spread of the virus have disrupted the sector’s supply chain, which relies heavily on fabrics imported from China, they said.

Elsewhere, China-backed infrastructure projects, such as the construction of the Padma Bridge – Bangladesh’s biggest public works project – have slowed as a side-effect of the outbreak. For weeks, Chinese engineers and employees working on the bridge have been stuck back home in China due to travel restrictions tied to COVID-19.

According to a local public health expert, Bangladesh is at “high-risk” for exposure to the virus because of the mobility and global reach of its expatriate workforce, which numbers in the millions.

“Thousands of Bangladeshis have been working … in different countries where infections have been reported,” Dr. Kanak Kanti Barua, the vice chancellor of Bangabandhu Sheikh Mujib Medical University in Dhaka, told BenarNews.

“A big number of expatriate Bangladeshis remain in back-and-forth movement. So, we should not be surprised,” he said, commenting on Sunday’s announcement of the country’s first COVID-19 cases.

He added: “Rather, we are lucky enough that the infection comes late.”

BenarNews staff in Washington contributed to this report.