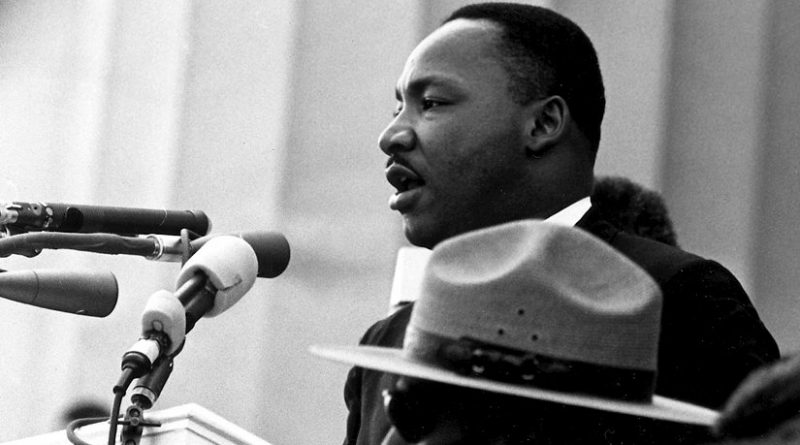 In April 1967, Martin Luther King Jr. powerfully condemned U.S. militarism and the war in Indochina. His speech, “Beyond Vietnam,” defied his closest advisers, who feared it would alienate war supporters within the white liberal establishment. I recommend it to all Americans whether they support or oppose the recent assassination of Iranian Gen. Qassem Soleimani.

King said that the hopes of the poor were shattered and broken because “of a society gone mad on war.” He warned “that America would never invest the necessary funds” to end poverty “so long as adventures like Vietnam continued to draw men and skills and money like some demonic destructive suction tube.”

He warned that “Vietnam is but a symptom of a far deeper malady within the American spirit, and if we ignore this sobering reality we will find ourselves” organizing against other wars “for the next generation.”

The United States had fallen “victim to … deadly Western arrogance,” King said. Americans could only be seen “as strange liberators,” and our nation had become “the greatest purveyor of violence in the world.”

Many Americans prefer “I have a dream” to King’s prophetic denunciations of U.S. militarism and American exceptionalism. If taken seriously, they require us to assess how and why the United States became a permanent warfare state, particularly as a result of the Iraq war.

Pundits justify the killing of Qassem Soleimani in Iraq because he meddled in affairs outside Iran’s borders in ways that clashed with U.S. interests; and he helped Iraqis develop unconventional warfare strategies which led to the death of American soldiers. These charges conveniently ignore that the United States is itself an outside power and that U.S. soldiers were killed after invading and occupying Iraq.

After the Iraqi government ordered U.S. troops to leave in 2011, Secretary of State Hillary Clinton told reporters: “We will have a robust continuing presence throughout the region … which should be freed from outside interference.”

Steeped in American exceptionalism, we fail to see the irony: The United States invades and occupies other nations, maintains more than 700 permanent military bases outside its borders, divides the world into combatant commands with geographically defined missions and deploys Special Operations Forces in more than 100 nations — but never sees itself as a meddling, outside power.

Justifying Soleimani’s assassination by citing his role in promoting unconventional warfare is equally spurious. It implies that people who embrace asymmetrical warfare when resisting an occupying army aren’t fighting fairly. They must accept the edicts of a foreign military superpower or fight a conventional war they have no capacity to wage and no chance of winning.

U.S. leaders know that our military dominance forces adversaries to use unconventional tactics. In 1998, Presidential Decision Directive 62 stated: “America’s unrivaled military superiority means that potential enemies (whether nations or terrorist groups) that choose to attack us will be more likely to resort to terror instead of conventional military assault.” The Defense Science Board noted in 1997: “… the military asymmetry that denies nation states the ability to engage in overt attacks against the United States drives the use of transnational actors.”

King’s critique of U.S. militarism and American exceptionalism, and the assassination of Soleimani, require us to explore why the United States meddled in Iraq’s affairs and the nature of the interests the United States pursued there. Shortly before the 2003 invasion of Iraq, a Wall Street Journal reporter told a high-level official in the George W. Bush administration that the war would be disastrous for the United States and Iraq. He was rebuffed: “We’re an empire now, and when we act, we create our own reality.” Months after the invasion, Vice President Dick Cheney and his wife’s Christmas card included a quote that seriously distorted a New Testament passage: “And if a sparrow cannot fall to the ground without His notice, is it probable that an Empire can rise without His aid.”

These arrogant, fancifully optimist claims had deep roots among the architects of the Iraq war who believed that the collapse of the Soviet Union presented them with opportunities to reshape and dominate the world. Their ambitions were clearly stated in a 1992 Defense Policy Guidance (DPG) draft written by Paul Wolfowitz on behalf of Defense Secretary Dick Cheney.

The DPG highlighted three things. First, U.S. foreign policy must prevent any nation or group of nations from challenging U.S. supremacy. Our “first objective” is to “maintain the mechanisms for deterring potential competitors from even aspiring to a larger regional or global role.” Second, the United States faces no serious rival and therefore should aggressively use military power worldwide to secure its advantages. Third, the United States should act unilaterally and not be constrained by international agreements and laws.

These radical ideas were developed further throughout the 1990s in well-funded conservative think tanks. Their clearest articulation appeared in a September 2000 report titled “Rebuilding America’s Defenses” (RAD) from the Project for a New American Century (PNAC). It was written by Wolfowitz and others who would soon be put in charge of U.S. foreign policy and champion the Iraq war during the administrations of George W. Bush.

RAD started by affirming the 1992 DPG as “a blueprint for maintaining pre-eminence.” It laid out “America’s Grand Strategy” to achieve permanent global domination. Among its notable components were these recommendations: dramatically increase military spending; increase the number of foreign military bases and deploy U.S. troops throughout the Middle East and world because the “presence of American forces in critical regions … is the visible expression of America’s status as a superpower”; replace policies that seek to contain adversaries with those that seek “regime change”; prevent other nations from having nuclear weapons because it is difficult to impose our will on those who have them; and militarize space because “space dominance may become so essential to the preservation of American military pre-eminence that it may require a separate service.”

The authors of RAD saw a unique historical opportunity for the United States to achieve permanent global domination. They also realized that the U.S. people wouldn’t be willing to pay the enormous costs in lives and treasure that would be required to implement their plan unless they could be galvanized by a traumatic event. Writing a year before 9/11, the authors of RAD put it this way: “the process of transformation … is likely to be a long one, absent some catastrophic and catalyzing event — like a New Pearl Harbor.”

This last sentence need not spawn conspiracies that 9/11 was an inside job. What is clear is that the people who orchestrated the Iraq war were the same people who developed “America’s Grand Strategy” and they used 9/11 as a pretext to implement their preplanned agenda. They consciously cultivated fear to galvanize support for a war that was their opening salvo in an ambitious campaign to dominate the world. “Keep elevating the threat,” Secretary of Defense Donald Rumsfeld urged his subordinates following 9/11. “Make the American people realize they are surrounded in the world by violent extremists.”

When the United States assassinates an Iranian general for interfering with U.S. interests, it is a minimal moral requirement that we honestly assess the nature of those interests. The United States has no moral authority or unique calling, no economic capacity, no effective military means and no security need that justifies embracing permanent war, invading and occupying other nations, or continuing wasteful military spending.

The collapse of all past empires was accelerated by imperial military overreach. Perhaps we can begin to see ourselves in Joseph Schumpeter’s description of imperial Rome: “There was no corner of the known world where some interest was not alleged to be in danger or under actual attack. … The whole world was pervaded by a host of enemies, and it was manifestly Rome’s duty to guard against their indubitably aggressive designs.”

As we commemorate Martin Luther King, let’s reject American exceptionalism and pledge ourselves to build alternatives to our permanent warfare state. And let us be guided by King, who reminds us that our “choice is not between violence and nonviolence but between nonviolence and nonexistence.”

*Jack Nelson-Pallmeyer is an emeritus professor of justice and peace studies, University of St. Thomas.

One thought on “MLK, Qassem Soleimani And The Folly Of American Exceptionalism – OpEd”