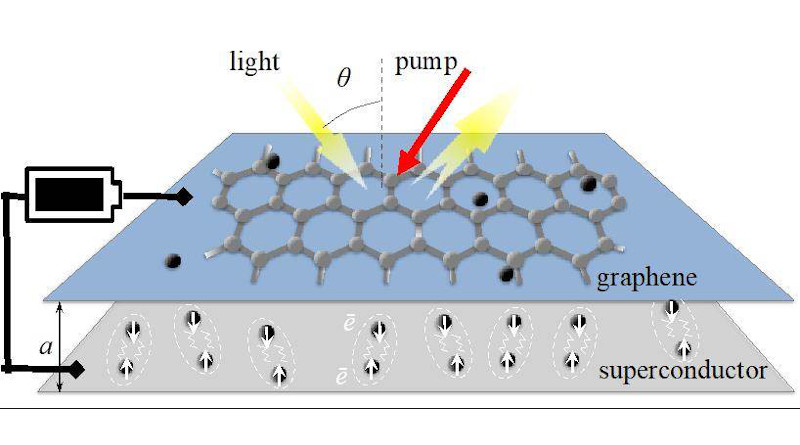 Graphic representation of the proposed terahertz (THz) amplification system with a graphene sheet and a two-dimensional superconductor. The amplification is due to the coordinated oscillatory behavior of the electrons at the interface between the two layers, powered by a light source or a battery, which results in stronger THz radiation, as shown with the reflected yellow arrow.

Researchers at the Center for Theoretical Physics of Complex Systems (PCS), within the Institute for Basic Science (IBS, South Korea) have proposed a transistor made of graphene and a two-dimensional superconductor that amplifies terahertz (THz) signals. This research was conducted in collaboration with colleagues from the Micro/Nano Fabrication Laboratory Microsystem and Terahertz Research Center (China), the A. V. Rzhanov Institute of Semiconductor Physics (Russia), and Loughborough University (UK) and was published in Physical Review Letters.

The growing interest in the THz frequency range can be easily explained by its various potential applications. This region of the electromagnetic spectrum, between radio waves and infrared light, is suited for extremely high-resolution images, non-invasive tumor detection, biosecurity, telecommunications, and encryption-decryption procedures, among others. However, practically, finding a powerful source of rays in this frequency range is so challenging, that researchers commonly refer to this problem as the “Terahertz gap.”

In this work, the researchers proposed a novel strategy to amplify THz radiation from weak and non-uniform signals, which are common in, for instance, biological samples. The device consists of a graphene sheet positioned in the vicinity of a two-dimensional superconductor and is connected to a power source, which provides enough energy to excite the electrons of the superconductor. The THz signal amplification is explained by the collective oscillatory behavior of electrons in both of the two materials plus the quantum capacity of graphene.

“This work demonstrates the application-oriented perspectives of systems characterized purely by quantum effects. Light-matter interaction in these hybrid systems not only represent fundamental interest, but it can become a basis for future devices, such as terahertz logic gates, which are currently in high demand,” explains Ivan Savenko, the leader of the Light-Matter Interaction in Nanostructures (LUMIN) team at PCS IBS.