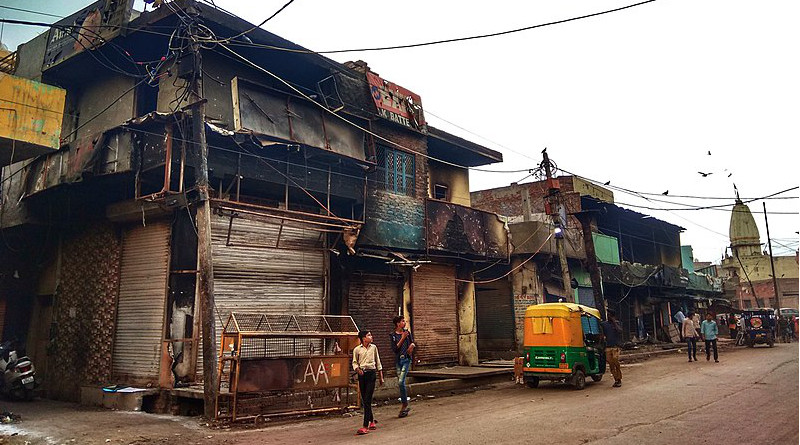 ‘Mama! I had a dream last night. What was it? I asked. ‘Zaynab and I were going somewhere on my bicycle. A group of people stopped us and inquired, ‘Are you Hindu or Muslim? I was very terrified and confused Mama! I didn’t know what to answer? We are Sikhs! I answered them after a while. They looked at each other and then told me to leave. As I left, I heard them murmuring, Musalman hota toh maar dete’. This narration of dream comes from my 10 year old son a day ago. One can well imagine the mental state of children that they are passing through in present times in the capital city of India.

As he ran out to play, I sat down on my sofa recalling the image of Ankit’s mother mourning her young son’s brutal murder. I cried my heart out when I saw the video of this bereaved soul. It is beyond my imagination to even feel the twinge of that bride who was married few days back. Her husband Ashfaque was fired 4-5 bullets straight in the chest. The image of an eight year old son crying inconsolably next to the coffin of his father Modassir squeezes my heart with pain. Fearful audio clips asking for help, rounds of messages circulating for help, houses with people inside set ablaze, shops on fire, hundreds of people hiding to save their lives, families seeking shelter on the roof of their house, while the house is set alight, youngsters cruelly beaten and asked to sing National Anthem, etc. did a rapid round in my mind. Annotations like ‘Marne do Musalmano ko’, ‘Hum denge tujhe Azaadi’,’Desh ke Ghaddaron ko……Goli maaro saalon ko’, ‘Pakistan kion nahi jaate’ and several other remarks echoed my ears and tears rolled down.

Am I staying in a civilized country? NO! Absolutely Not! Was the answer. No cultured society can butcher and bake its citizens like it has done in the capital city of India in North East Delhi recently. Are we living in a democratic setup? Perhaps not. Actually, our democracy is hypocrisy. The idea of secular, socialist, sovereign, democratic republic is eventually changing.

After the passage of Citizenship Amendment Bill (CAB) in the Lok Sabha on 9th of December 2019 students of Jamia Millia Islamia and Aligarh Muslim University raised their voices against the unconstitutional bill as it gives citizenship on the basis of religion. However, two days later the bill became an Act as it was passed in the Rajya Sabha too. According to Citizenship Amendment Act (CAA) 2019 people from three neighbouring countries namely; Afghanistan, Pakistan and Bangladesh and people of six faiths namely; Hindus, Sikhs, Jains, Buddhists, Parsis and Christians will be given Indian citizenship. The citizenship criterion clearly excludes Muslims.  In India, religion has never been the basis for providing citizenship as it is a secular, socialist and democratic republic.

People also started protesting against the proposed National Register of Citizens (NRC) which has already been carried out in the Assam state of India and the Home Minister had announced in the Parliament that it would be carried out for the entire country. It is worth mentioning that in Assam 19 lakhs people were left out of the NRC as they could not provide the documents as a proof of their citizenship. It is such an irony that even voter identity cards are not a proof of Indian citizenship. It is on the basis of voter identity cards that Indians have voted and elected the present government and now the elected government is questioning the citizenship of its people. Along with CAA and NRC people are also protesting against National Population Register (NPR). Though NPR is not a harmful exercise but the present NPR based on 2003 rules is arbitrary in nature in both text and context. As mentioned on the official website of Ministry of Home Affairs, NPR is the first step towards NRC. Thus, CAA along with NPR and NRC is currently facing criticsm from all caste, class, region, religion, gender, faith, etc.

University protests were brutally cracked down by the police and students were beaten up mercilessly to the extent of losing their arms, hands, legs and eyesight. Forget the mental trauma all of them have been going through since then. The wave of peaceful and non violent protests against CAA from Jamia Millia Islamia and Aligarh Muslim University soon spread to different places in the capital city of Delhi and several other parts of India.

Protesters in Uttar Pradesh state of India were killed, looted and now their names along with house addresses are at display at public places. The State government has threatened to confiscate the properties of protesters. This is not the end; violence broke out in several parts of North East Delhi on 24th of February. Young armed goons full of hate looted and burnt several houses and mercilessly killed people. Charred bodies were dumped in the nearby canal. Dead bodies with multiple stabs kept coming until recently and hundreds were brutally injured. They are still under treatment in various hospitals. 29 from Uttar Pradesh and 53 from North East Delhi have been declared dead till now.

Is holding peaceful protests and demonstrations such a heinous crime in a democratic state? Is this the way dissent is met in a democratic country? Don’t the people in India have a right to disagree with any law passed by the government? The state is democratic only till you do not show your disagreement. I wonder how Mr. Prime Minister can go hugging and cuddling with the United States President on that particular day while his own capital of the country was engulfed in flames.