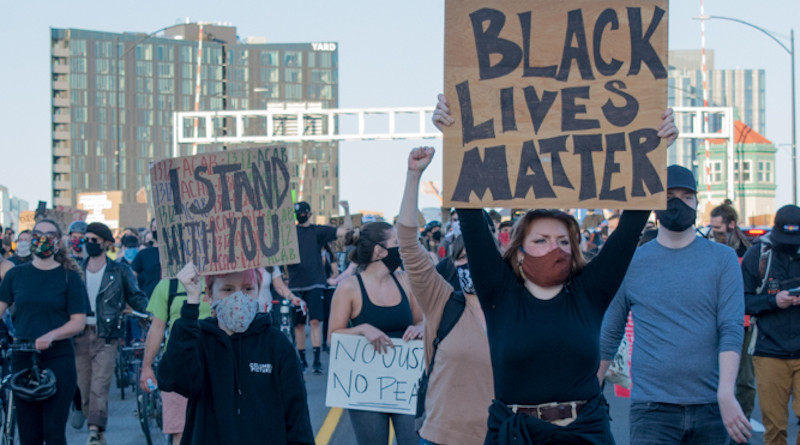 As Black Lives Matter protests proliferate in cities around the globe, with hundreds of thousands of people defying warnings about the risks of spreading the coronavirus disease (COVID-19) and after millions viewed in horror the appalling killing of George Floyd, we have the chance to rise to the challenge of this movement.

Racism and inequality in all forms must be tackled. This must not be some fleeting internet fad but a sustained assault against what is, in the US, undoubtedly systemic, institutionalized racism. White supremacism must be crushed for the vile ideology it is with all the resources and vigor directed at the pandemic.

It is time for all of us to acknowledge and internalize how widespread the issue is — that it is not confined to certain areas of the US alone or merely related to police brutality. We have to find the vaccine to the virus of racism.

Yet these two stories, the pandemic and racism, are linked. The coronavirus throws up its own challenges to black, Asian and minority ethnic (BAME) communities in North America, Europe and no doubt elsewhere. Research increasingly shows that they are being hit disproportionately hard by the virus.

Last week, one of the most substantive pieces of research yet was released by Public Health England (PHE). It found that members of British Bangladeshi communities were twice as likely to die from COVID-19 as white people. Meanwhile, those of Chinese, Indian, Pakistani, other Asian, Caribbean and other black ethnicity had between a 10 and 50 percent higher chance of dying from the disease. This follows research in Norway that showed that people who originated from Somalia were 10 times more likely to get infected.

Black Americans make up about 14 percent of the US population, yet account for almost a third of infections. One survey indicated that black Americans have been dying at three times the rate of whites. In only six US states has the death rate of black residents been roughly proportional to the size of their population.

Latino Americans and Native Americans also suffer disproportionately. The Navajo nation of Native Americans in Arizona and New Mexico has been hit hard. The House of Representatives subcommittee on racial disparities has been taking evidence on the issue, but who has confidence that the current American administration will strain every sinew to get to the bottom of why this is the case and then tackle the underlying causes.

How should governments respond? Well, with considerably more urgency than some have shown so far. The publication of the PHE study was reportedly delayed because of, wait for it… fears it could stoke racial tensions. This must be just the start and a full public inquiry should follow.

Why, people might ask, does this relate to Black Lives Matter? Surely these are separate issues, one of racism and the other a global pandemic. But they are intrinsically linked. The pandemic is exposing exactly the sort of issues Black Lives Matter advocates have been highlighting. These communities do not need to wait for scientific data to tell them that the virus has hit them harder, and they know why. Once again this discrepancy is not accidental, a weird statistical anomaly, but a consequence of the systemic and historic discrimination they have always suffered in countries like the US. They know most public health emergencies hit them harder than other communities.

Consider this: If reports had shown that the white British population was twice as likely to die from the virus, how would the government have reacted? How would public opinion shape up? What would the media have focused on? The demand for substantive and urgent action would have engulfed the government in a way not yet seen with the likes of the PHE survey.

What is far more likely and is indicated by this initial data is that BAME communities in the West are disproportionately hit because of widespread inequality. They are poorer and tend to live in overcrowded, smaller dwellings, possibly with large three-generation households. Other factors include the type of jobs they do, which make isolation difficult. Many in poverty cannot afford to give up their jobs, even if they are dangerous. In the US, blacks are more likely than whites not to go to a doctor because of cost. In many Western countries, BAME men are more likely to be affected by the pandemic economically and be at greater risk of losing their jobs. Undocumented laborers in the US have no safety net at all and, of course, frequently come from the black or Latino communities.

There are also a high number of BAME workers on the front line. In the UK, Pakistani men are 90 percent more likely to work in the health care sector than white British males. One survey showed that the number of BAME health staff who died in England was seven times higher than white workers. Many health workers interviewed believed that this was because BAME workers were more likely to be given dangerous front line roles with an increased risk of exposure.

An argument abounds that many in BAME communities do not, for historic reasons, trust the mainstream media and government sources, so as a result were not exposed to the same levels of public awareness about the virus and social distancing. In the US in particular, some have bought into the notion that it is a hoax and so did not take it seriously.

The fear is that the protests bringing so many people together will provide a powerful engine for a spike in the virus among the very communities that are justifiably demanding their rights. Many of those arrested may land up in prisons, where the risk of infection is high.

The coronavirus has shone a spotlight on our societies, enabling us to see the heroic efforts of health and care workers and other front-line staff, and the extraordinary community spirit of looking after the most vulnerable and elderly. Yet, at the same time, it has also highlighted the uglier side: The injustices and inequalities that too many people have ignored for too long, not least the more affluent privileged classes.

Home » Coronavirus Shines A Light On Our Societies’ Inequalities – OpEd