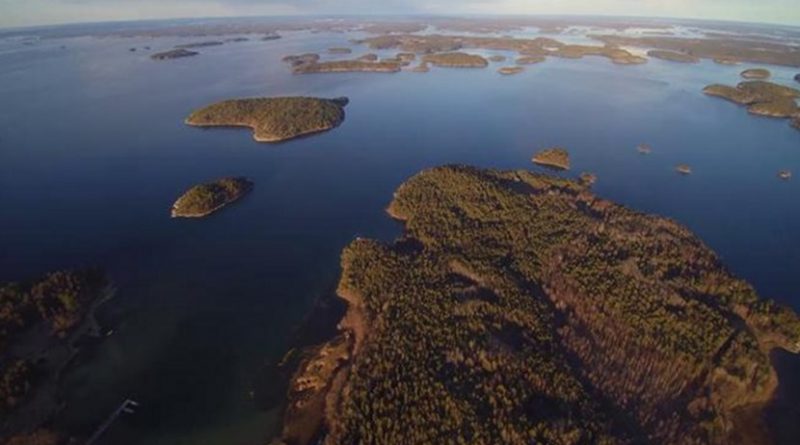 This is an aerial view of the Archipelago Sea (to the west, study location in the background). This shallow coastal area in the northern Baltic Sea is characterised by a mosaic of thousands of islands, comprising a remarkably diverse environment both geologically and biologically. Credit: Kari Mattila, The Archipelago Research Institute

The Baltic Sea is home to some of the world’s largest dead zones, areas of oxygen-starved waters where most marine animals can’t survive. But while parts of this sea have long suffered from low oxygen levels, a new study by a team in Finland and Germany shows that oxygen loss in coastal areas over the past century is unprecedented in the last 1500 years. The research is published in the European Geosciences Union journal Biogeosciences.

According to the researchers, human-induced pollution, from fertilisers and sewage running off the countries surrounding the Baltic into the sea, is the main driver of recent oxygen loss in the region’s coastal waters. The spread of low-oxygen areas can have dire consequences for the environment and for local populations as it can reduce fish yields and even lead to massive mortality of marine animals.

“The Baltic was strongly impacted by human nutrient inputs in the 20th century and is still experiencing the legacy of those inputs today,” said Tom Jilbert, an assistant professor at the University of Helsinki, Finland, who took part in the research. But despite recent measures to reduce the release of polluting nutrients, the researchers write in the new study that they found “no evidence of recovery” from oxygen depletion in the Archipelago Sea, a coastal area between mainland Finland and Sweden that is part of the Baltic.

A reason, they say, may be climate change. Since warm waters are less effective at holding oxygen, “global warming is likely to exacerbate oxygen depletion,” said Sami Jokinen, a researcher at the University of Turku, Finland, and lead-author of the Biogeosciences study. Jilbert added: “Climate change was not the main cause of the current dead zone, but it is an important factor delaying the recovery.”

To find out what fueled oxygen loss in the past and what role climate played, the team drilled and studied a 4-metre-long sediment core from the seafloor in the Archipelago Sea. This allowed them to see, for the first time, how oxygen levels changed in this area over the past 1500 years. This period includes the Medieval Climate Anomaly, a time of warmer climate but low nutrient pollution from 900 to around 1350, as well as modern times.

“The interesting finding from our study is that, in the coastal areas, oxygen loss in the modern period really stands out, due to the strong signal of recent human nutrient inputs,” said Jilbert. The team found that oxygen levels were also low during the warmer medieval period, but they write in their study that the present oxygen loss is “unprecedentedly severe,” showing how excess pollution and warmer temperatures can combine to make dead zones thrive.

The team also found that this recent oxygen loss started in the early 1900s, decades before it had been previously thought and prior to regular water-quality monitoring. “This is surprising because the 1950s is often regarded as the period of rising oxygen depletion in the Baltic Sea, which has been linked to the substantial increase in human-induced nutrient loading around that time,” said Jokinen. Landmass in the Baltic Sea area has been rising since the end of the Ice Age removed weighty ice sheets from the region, and this uplift makes some coastal areas more sensitive to oxygen loss. “On top of this, we found evidence of marked human-induced nutrient loading already at the turn of the 20th century, which likely stimulated oxygen depletion in coastal areas,” he continued.

This nutrient loading has long-term effects, making it hard to stop the ongoing spread of dead zones. Rivers in the inhabited coastlines of the Baltic carry nutrients into the sea, triggering algal blooms. As the algae die, they sink to the seafloor and are decomposed by bacteria, which use up oxygen in this process.

“If human nutrient inputs are reduced, this might be expected to reduce the blooms and shrink the dead zone,” explained Jilbert. But, in dead zones, the decaying algae release phosphorus more efficiently, which then flows back to surface waters where it leads to the growth of cyanobacteria (blue-green bacteria), which, in turn, capture nitrogen from the atmosphere. “As a result, the total amount of nutrients – phosphorus and nitrogen – in the water remains high even after human inputs have been reduced,” said Jilbert. “It is a self-sustaining vicious circle that can take decades to reverse,” adds Jokinen.

“Nowadays, and likely in the future, oxygen loss in the Archipelago Sea is sustained by the continued leakage of nutrients from the agricultural land, the release of phosphorus from the sediments to the water column due to low oxygen levels, and by the ongoing global warming,” said Jokinen. “Hopefully our study will contribute to the better recognition of climate change as a substantial driver of oxygen loss in the Baltic alongside human-induced nutrient loading. To achieve good ecological status in coastal areas under the projected global warming, the required reduction in nutrient input might be higher than previously thought,” Jokinen said.

“The good news is that many countries in the Baltic catchment have taken significant steps towards nutrient loading reductions,” said Jilbert. “In some coastal regions we are already seeing improvements. Better understanding of the balance between nutrient inputs and climate change will therefore help to guide management of the Baltic in the future.”