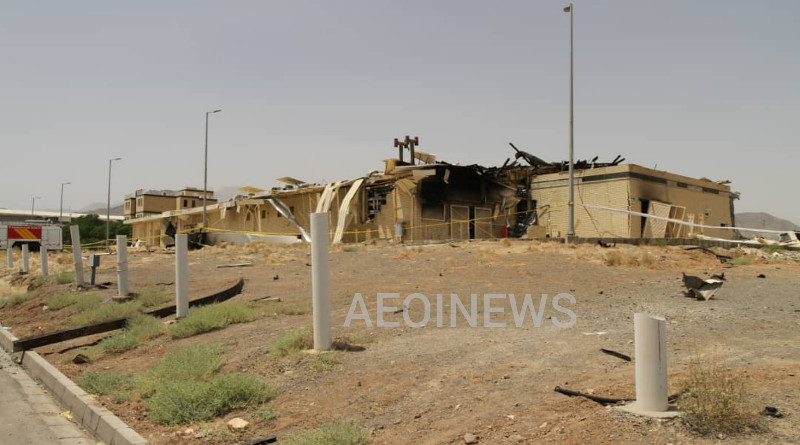 (RFE/RL) — There is growing support among outside security experts for the notion that an “incident” at Iran’s main nuclear-enrichment facility last week was an act of sabotage in a shadow war aimed at setting back Tehran’s nuclear activities.

Many analysts believe that a foreign state, possibly Israel, was behind the July 2 fire at the Natanz facility in Iran’s central Isfahan Province.

The conflagration caused “considerable financial damage,” according to Iran’s Atomic Energy Organization, which had originally sought to downplay the incident.

An image released by Iran in the aftermath of the incident and satellite images released abroad showed significant damage — including ripped-out doors, scorch marks, and a collapsed roof — at a building where centrifuges were assembled.

Iranian authorities have said they know the cause of the incident but have withheld any public announcement due to “security” issues.

“Many countries have a clear interest to delay the Iranian nuclear military project; one of them is Israel,” Yaakov Amidror, a retired major general and former national-security adviser to Israeli Prime Minister Benjamin Netanyahu, told RFE/RL.

Iran maintains that all of its nuclear activities are peaceful, and it has opened its known nuclear sites to UN inspectors since signing a deal in 2015 exchanging curbs on its nuclear program for sanctions relief with world powers including the United States, which has since walked away from the deal.

But the United States and Israel have for years accused Iran of a long-running effort to acquire a nuclear bomb-making capability.

They are thought to have targeted Iran’s nuclear program in the past with cyberattacks and malicious software, or malware.

One of those suspected joint efforts was the Stuxnet computer worm, which damaged Iran’s nuclear infrastructure according to reports that began to emerge in 2010.

At least four Iranian nuclear scientists were assassinated between 2010 and 2012, engendering speculation that the killings were part of a suspected covert campaign waged by Israel against Iran’s nuclear program.

After last week’s fire at Natanz, The Washington Post on July 6 quoted a Middle Eastern security official as saying a “huge explosive device” had been planted by Israeli operatives to “send a signal” to Tehran.

“There was an opportunity, and someone in Israel calculated the risk and took the opportunity,” the unnamed official told the paper.

On July 5, The New York Times quoted “a Middle Eastern intelligence official with knowledge of the episode” as saying Israel had targeted Natanz using what the paper called “a powerful bomb.”

Israel has neither confirmed nor denied any role in the incident.

Speaking on July 5, Israeli Defense Minister Benny Gantz said his country wasn’t “necessarily” behind every incident in Iran, adding that Israel’s long-standing policy is not to allow Iran access to nuclear capabilities.

Ilan Goldenberg, director of the Middle East Security Program at the Center for a New American Security, said Israel has demonstrated the ability “to penetrate Iran’s nuclear program,” most recently in 2018 when Israeli agents are reported to have broken into a warehouse in the Iranian capital and extracted a trove of documents detailing the country’s nuclear activities.

“It is the type of operation that Israel might conduct at any time when it sees the opportunity,” Goldenberg, who previously headed an Iran team in the Office of the U.S. Undersecretary of Defense for Policy, told RFE/RL.

Speaking generally and not about this specific incident, he suggested the aim of such operations might be to delay Iran’s nuclear program “as much as possible.”

“For Israelis, there is also the additional benefit of trying to create the perception of chaos at a time when the Iranian government is struggling with an economic crisis and COVID-19,” he added.

The Natanz incident comes amid a gradual backing away by Tehran from its commitments under the 2015 nuclear deal.

It has said its moves are a response to the May 2018 withdrawal from the so-called Joint Comprehensive Plan Of Action (JCPOA) by U.S. President Donald Trump and the reimposition of harsh U.S. sanctions that have crippled Iran’s economy.

Raz Zimmt, an Iran analyst at the Institute for National Security Studies (INSS) in Tel Aviv, suggested that the incident at Natanz could reflect Israeli concern about Iran’s expansion of its nuclear activities beyond the limit set in the nuclear deal, which Israel opposed.

“Not only that Iran still refuses to return to negotiations, but it has withdrawn from its commitments to the JCPOA shortening the breakout time considerably,” he said in a reference to the period needed to amass enough weapons-grade uranium to arm a nuclear weapon.

“Under those circumstances, and especially considering the possibility that it would be difficult to go back to the JCPOA whether Trump wins the U.S. elections [in November] or [Democratic challenger] Joe Biden [does], Israel is back in the dilemma of either to allow Iran to continue advancing its nuclear program up to a short distance from a breakout capability or to use covert operations, or even a military option in the future, in order to delay Iran’s nuclear program,” Zimmt said.

Any sabotage targeting Natanz, if conducted by Israel, could pose a dilemma for Tehran on how to respond. Admitting an Israeli role could be interpreted as showing that Tehran was unable to prevent such an attack and would also likely suggest a need for retaliation, which could in turn prompt Israeli action.

“The reason why authorities are not ready to point their fingers at Israel is that they would then be forced to react — at least at the same level, which would be very difficult, and it would result in Israeli retaliation,” said former Iranian diplomat Hossein Alizadeh, who thinks Tehran’s “cautious” reaction appears to confirm the assessment that Natanz was targeted by a foreign power.

Speaking on July 7, Iranian government spokesman Ali Rabiei suggested that reports claiming an Israeli role in the destruction at Natanz were part of a “psychological war” against his country.

“The Israeli regime should be aware that creating a norm-breaking narrative on any attack against our nuclear facilities, even if it is only propaganda, is considered as stepping in the path of violating red lines of global peace and security,” Rabiei was quoted as saying by the semiofficial Mehr news agency.

The fire at the Natanz facility follows several other suspicious incidents, including a June 25 explosion at a gas-storage facility near a military base east of Tehran.

That has led to speculation about a possible Israeli or U.S. effort to destabilize Iran’s clerical establishment, which is already under intense pressure due to sanctions, growing public discontent, and a coronavirus outbreak that has killed more than 12,000 Iranians and infected nearly 250,000, according to official figures that are thought to be a significant underreporting.

Analyst Zimmt, meanwhile, warned of the danger of speculating about connections between such events.

“It is inevitable that some of the incidents are also related to infrastructure problems due to the difficult economic situation or mismanagement,” he said.