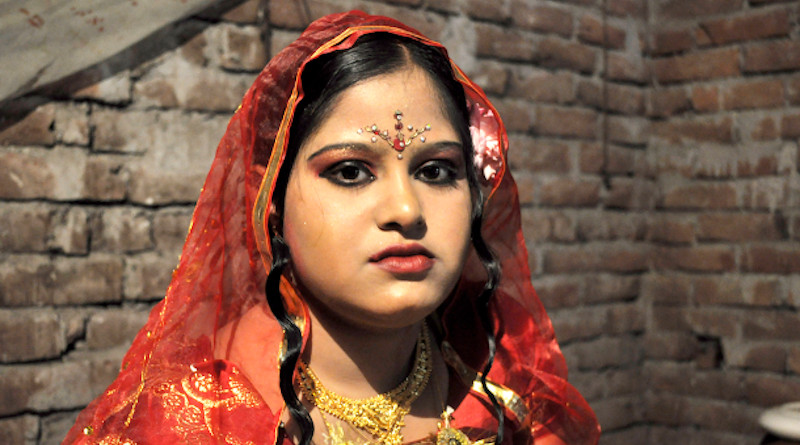 A 15-year-old girl gets ready for her marriage ceremony in northern Bangladesh in this file photo. Photo Credit: Stephan Uttom/UCA News

The Covid-19 pandemic allows poor Bangladeshi families to marry off their daughters without the need for expensive weddings.

Sheuli Das can only blame her bad luck and Covid-19 for bringing an abrupt end to her education and forcing her into an early marriage.

Sheuli, 15, a tenth grader from Keshobpur in Jessore district of Bangladesh, was married to a local businessman on April 25, about a month after the government closed all education institutes and enforced a nationwide shutdown due to the pandemic.

Her father, Chittya Das (not his real name), 40, says the decision to marry Sheuli off was mostly for unavoidable circumstances and the “better interests” of her and the family.

“Since the school closed, local young men started teasing her. There is no social security, so we were tense. Moreover, we have found a suitable man for her to ensure a happy married life,” the Hindu father of two told UCA News.

Eve-teasing or stalking is common in Bangladesh. It takes various verbal and non-verbal forms, from whistles, leers and winks to unwanted physical contact, catcalls and sexually suggestive remarks by boys and young men.

As a low-income rickshaw-van puller who lives hand to mouth with his family, Chittya considered saving money for his eighth-grader son more sensible than investing in his daughter.

The wedding, under government-mandated health guidelines to combat the coronavirus, was a huge relief for the family as he had to spend only about 5,000 taka (US$59), whereas it would have been about 150,000 taka ($1,770) in normal circumstances.

“We really didn’t want to marry her off, but considering the situation it was a good decision for her and the family,” Chittya added.

In relatively poor rural areas of Bangladesh, the pandemic has slowly triggered hundreds of mostly unreported underage marriages, social workers say.Since March, at least 40 child marriages have taken place in Keshobpur, according to Shyamol Chandra Das, 39, a field officer with NGO Parittran (Salvation). Another four were stopped before the wedding ceremony.

“Here, people are poor and they consider the time of Covid-19 suitable for a simple wedding for their daughters. They don’t need to spend a lot of money for the program and dowry. Most of these marriages have remained largely unreported,” Shyamol told UCA News.

In Kurigram district, child marriages have increased from 8 percent in March to over 11 percent now, according to Ehsan Kabir, communication officer with Plan International, a UK-based charity that advocates for child rights.

Bangladesh has one of world’s highest rates of child marriage, according to Girls Not Brides (GNB), an international coalition of women and child rights groups. The Muslim-majority nation is ranked fourth after Niger, the Central African Republic and Chad.

About 59 percent of girls get married before 18 and about 22 percent are married by 15 in Bangladesh, according to a 2017 study by UNICEF, the United Nations children’s agency.

This high prevalence of child marriage exists despite Bangladesh committing to eliminate child, early and forced marriages by 2030 in line with UN Sustainable Development Goals. It also has the Child Marriage Restraint Act 1929, which sets the mandatory marriageable age for men at 21 and for women at 18, with violation a punishable offense.

However, the ruling Awami League government faced criticism at home and abroad for amending the law in 2017. It included a provision to allow for marriage of girls under 18 in “special circumstances.”

“If a minor girl, in some special circumstances, is married for her best interest with consent from the court and her parents, and in following appropriate procedures, then it will not be considered a crime under this law,” the provision states.

Critics alleged that the move was intended to reduce high figures of child marriage and improve the nation’s image on the issue.

Rita Roselin Costa, a women’s rights activist with BRAC, a Bangladeshi NGO, pointed to some immediate factors behind the surge in child marriage.

“Due to Covid-19, local and overseas migrant workers have returned home and they are looking for suitable brides for marriage. Parents are feeling insecure to keep their daughters at home as schools and colleges are closed. Moreover, poor families find it a financially practical move to arrange low-cost and dowry-free marriages,” Costa, convener of the women’s desk at the Catholic Bishops’ Conference of Bangladesh (CBCB), told UCA News.

Costa noted that Christians, especially the Catholic Church, have taken a “zero tolerance” policy against child marriage and it has been effective in removing the practice from the Christian community.

“In CBCB-sponsored programs and at parish level, child marriage is strongly discouraged and anti-child marriage lessons are imparted to students and parents by church-run education institutes. The Church has been successful in diminishing child marriage,” she said.

“Although a minority group, Christians are an example of success in the battle against child marriage. This could be a matter of research and it should be presented as a national model for others to follow.”

Abul Hossain, a project director at the Ministry of Women and Children Affairs, said the government is vigilant about child marriage and denied any significant rise in the practice during Covid-19.

“From districts to grassroots villages, there is a mechanism in place to monitor and curb child marriage. There might be some fringe incidents of child marriage, but it is not high and worrisome,” Hossain told UCA News.

“It is true that government officials are more engaged in the Covid-19 response, and there are possibilities of a rise in domestic violence and child marriage. That does not mean a significant increase.”