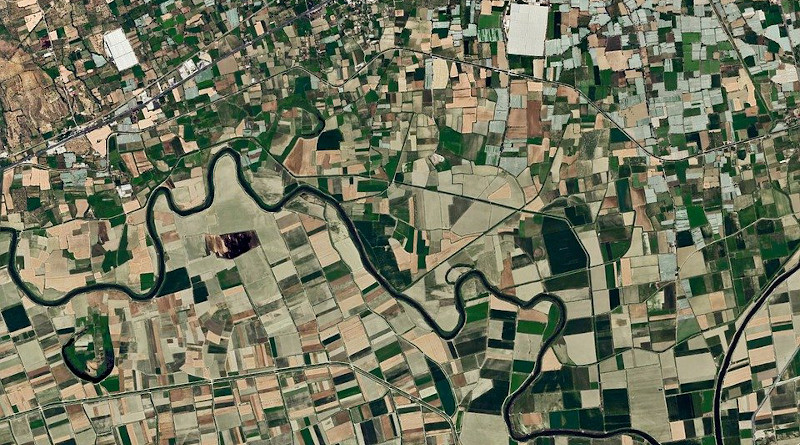 The recent use of geospatial analyses by Indian social and mainstream media for near real-time defence and military intelligence in Ladakh has been made possible because of the lower cost of earth-observation satellite construction, and thereby, easy access to satellite imagery on the internet.

India is responding to the Chinese aggression on the entire Indo-Tibetan landmass, spanning from the Wakhan Corridor to Arunachal Pradesh, through various means. Our democratic social and mainstream media has begun reporting on the strategic conflict extensively. The country has not procrastinated this time in realizing that China will sooner or later extend its colonialist war by fighting both military as well as informationized battles. As a result, a growing number of recent news and analytical reports in India are accompanied by commercial geospatial datasets and satellite imagery (GD&SI).

The use of GD&SI for reporting-based analyses is not new. The first-ever use dates to April 29th, 1986, immediately after the Chernobyl nuclear disaster in the Soviet Union, when journalists and analysts from all over the world were keen to report the extent of damage caused by the accident and raise the liability account to corner the then Soviet leadership. However, the Iron Curtain was limiting such on-ground reportage as was the large exclusion zone that resulted from the nuclear radiation. It was then the United States Geological Survey’s LANDSAT 5 became the first civilian-commercial remote sensing satellite to take images of the accident site, three days after the incident. France’s Spot Image company had launched the SPOT-1 satellite in February 1986. It delivered a superior resolution (10 meter) satellite image of the accident site a few days later.

This practice was next used in a big way during the 1991 Operation Desert Hell when the same LANDSAT took images of the numerous oil wells lit on fire by invading Iraqi forces in Kuwait. Despite these successful commercial technology demonstrations, satellite-driven reporting did not flourish easily. It was seldom used by Western investigative analysts to report on the clandestine military programs of Iran, North Korea, Russia, and China. Reports that made it to the media were based on a few publicized images and concerted narrative setting aided by intelligence agencies. Otherwise, many national geospatial agencies were impeding the wide-spread and unabated sale of commercial GD&SI on the basis of national security ramifications; a policy commonly called as ‘Shutter Control’.

The recent use of geospatial analyses on Indian social and main-stream media has been made possible because of the falling cost of earth-observation satellite construction and launch, easy-to-use imagery and data, and a subscription-based business model affordable to financially-modest independent geospatial specialists. None of these media-released images are coming from ISRO or private Indian satellite imagery companies.

These Geospatial Satellites As Services (GSaaS) are coming prominently from MAXAR and PLANET, the two US-based renowned commercial geospatial companies. GSaaS specialists are collaborating with journalists, independent political and military analysts, and media companies for analyzing the developments in the conflict zone. These efforts are aiding the commoner’s knowledge of Galwan Valley, the Shyok River, the G219 Highway, the Leh-Daulat Beg Oldi Road, Skardu and even Pangong Tso’s Eight Fingers, which until now were merely a beautiful desert landscape behind the azure lake waters. But shouldn’t India contemplate shutter control over such GSaaS particularly now when the entire Karakoram-Himalayan Belt is becoming a geopolitical cauldron? The answer is nuanced.

No sensible country ideally wants its strategic installations regularly mapped by satellites of other countries. Yet, both friendly and adversarial countries cannot resist from prying is an acknowledged fact. Such prying by states can be managed through diplomacy.

What cannot be managed is snooping by malicious non-state actors as they now can make use of easily available and inexpensive commercial GD&SI. Hence, shutter control is justified. Data sells and cheaply available data sells even more. Regulating easily and cheaply available rich (in terms of information and intelligence) commercial satellite imagery and data under the premise of shutter control could be a tricky affair, particularly when the data providers are of overseas origin and are selling the data globally.

Likewise, enforcing such regulations on domestic companies will be detrimental for India’s aspiration to raise a globally competent private GSaaS industry, especially since it has vowed to draft a liberal domestic geospatial policy. Although there is no public discussion on this topic nor in India’s strategic circles, a liberal geospatial policy announcement should not close the door on shutter control. Hitherto, there is scope for soft shutter control and this is how it can be done.

On the domestic front, India’s foremost national geospatial agency should be endowed to purchase all the private-commercial geospatial datasets generated, perhaps at a subsidized rate, and be a perennial customer or subscriber of all private geospatial companies operating out of India. The agency can then get into a binding agreement where it obligates the companies to warp the images and datasets of certain security-sensitive geographical coordinates within the country. The filtered – shutter controlled – GD&SI can then be permitted for commercial sale without further inhibitions. Such a soft domestic shutter control can address security concerns as well as emancipate the much necessary commercial progress of the domestic geospatial industry.

The next challenging step for India is to convince partner countries to sign on the dotted line. This can be initiated with the third and final of the strategic foundational agreements with the United States – the Basic Exchange and Cooperation Agreement (BECA). The India-US BECA Agreement is principally based upon the exchange of military-grade geospatial, nautical, topographical, and aeronautical data between the two countries. Commercial GD&SI are likely out of scope in the current draft of BECA. Nonetheless, New Delhi should call for a clause in the BECA draft where it requests Washington to blur out zones and coordinates sensitive to India from the commercial imagery generated by US-based geospatial companies. In return, New Delhi should offer reciprocal blurring of sites sensitive to US’ interests from commercial GD&SI generated from Indian-origin companies.

Simultaneously, now as a temporary member of the United Nations Security Council (2021-2022), India should envisage putting forth a multilateral United Nations Protocol, binding to all member states, where countries are asked to implement soft shutter control only to prevent GD&SI falling in the hands of malicious non-state actors and preventing the consequential utility of GSaaS for cross-border terror, organized crime and illicit activities. With the Indian government’s recent liberalization efforts, many of the policy-level impediments of private and commercial Indian GSaaS companies will soon be ironed out. But such a policy should also, without inhibiting their business growth, reflect on India’s emerging national security demands.

Analytical reports that use commercial GD&SI provide the much necessary proofs and validations for activities that cannot be reported from ground. The new-found fête for GSaaS in India’s free media is here to stay. If India is to unravel the distortions in its neighborhood and shape narratives, it should then too use this media-GD&SI collaboration for substantiating environmental and human right violations to the fullest. The ongoing conflict on the Indo-Tibetan landmass is a good starting point.

Source: This article published by Gateway House and originally at News Bharti.