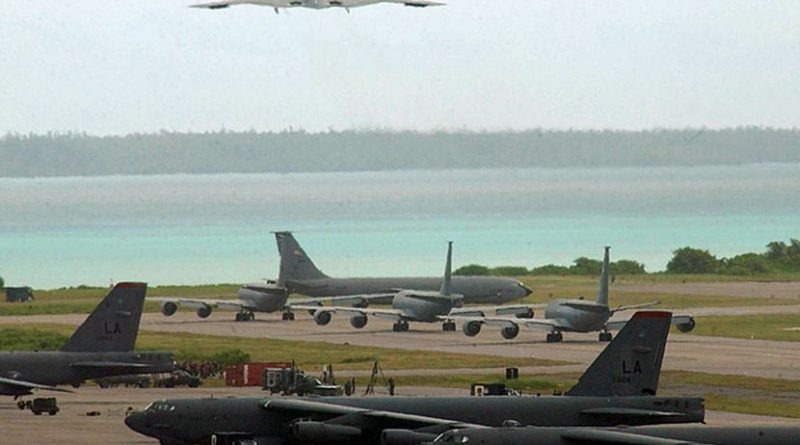 A B-2 bomber takes off, with B-52 bombers on tarmac on Diego Garcia. Photo Credit: U.S. Air Force photo by Senior Airman Nathan G. Bevier

There are few more righteous sights than the paunchy US Secretary of State savaging the People’s Republic of China with his next volley on Chinese territorial aspirations.  In July, Mike Pompeo released a statement putting any uncertain minds at ease on where Washington stood on the matter. “We are making clear: Beijing’s claims to offshore resources across most of the South China Sea are completely unlawful, as is its campaign of bullying to control them.”

International politics, for all that confidence, rides on the stead of hypocrisy.  The more vehement a condemnation regarding a course of conduct, the more likely the stead is about to turn.  For all the promises of freedom of navigation and repudiation of Chinese claims to the South China Sea, the United States nurses its own questionable readings of international law.  The term “rule based order” is a lovely one seemingly shorn of realpolitik (nothing of the sort), but collapses on closer inspection.

When it comes to the matter of alleged Chinese violations of maritime law in the South China Sea, odd messages bubble from the mouths of US officials on, for instance, violations of the UN Convention on the Law of the Sea.  Pompeo speaks of preserving “peace and stability”, upholding “freedom of the seas in a manner consistent with international law, maintain the unimpeded flow of commerce” and opposing “any attempt to use coercion or force to settle disputes.”  He also refers to UNCLOS, a document the United States has not ratified despite President Barack Obama’s previous plea that the Senate, were it to do so, “should help strengthen our case [against China’s actions in the South China Sea].” Smugly, Pompeo cites the ruling of the Arbitral Tribunal constituted in accordance with UNCLOS, as its finding on July 12, 2016 rejecting “the PRC’s maritime claims as having no basis in international law.”

The same can be said of the enormous air base known as Diego Garcia, located in the Chagos Archipelago in the Indian Ocean.  It is worth noting that predatory behaviour was very much part of the policy towards the indigenous populace of the island, which had been a dependency of the British colony of Mauritius.  In 1965, the Chagos Islands was separated from Mauritius in exchange for an “indemnity” of £3 million. What was created in its place was a legal misnomer of some nastiness: the British Indian Ocean Territory.

In 1966, the US was promised a strategic tenancy on Diego Garcia for five decades.  The UK Permanent Under-Secretary promised to be “tough about this.  The object of the exercise was to get some rocks which will remain ours; there will be no indigenous population except seagulls who have not yet got a Committee (the Status of Women does not cover the rights of Birds.”  Very droll.

This brutal endeavour was done as part of Britain’s continued need to feel relevant in the post-colonial power game, a supposedly sagacious proxy for the projection of US power.  It was also done against the spirit of decolonisation stressed in UN General Assembly Resolution 1514 (XV), which noted that “[a]ny attempt aimed at the partial or total disruption of the national unity and the territorial integrity of a country is incompatible with the purposes and principles of the Charter of the United Nations.”

The British authorities were true to their word: the indigenous population between 1967 and 1973 was forcibly relocated to Mauritius and the Seychelles, with the US paying $14 million for the effort.  The way for the establishment of a military base was cleared but only after pockets of Chagossian resistance were crushed through threats and intimidation.

Analysts from the US perspective look at this situation as one forced upon the United States and find China, as tends to be the pattern these days, the catalyst of encouragement.  “The policy trigger,” writes retired Rear Admiral Michael McDevitt, “was the 1962 Sino-Indian war, when Indian Prime Minister Jawaharlal Nehru had pressed Washington for military assistance to India.”  The Kennedy administration obliged by sending the USS Kitty Hawk, an aircraft carrier with the express purpose of deterring China in the event of any push towards Calcutta.  The analysis by McDevitt is bloodless, mechanical, and makes no mention of the Chagossians.  Absent are US methods of terroristic pummelling.  What he does describe is the indispensable nature of the base, “perfect … for US Navy maritime patrol aircraft and especially US Air Force heavy bombers.”

These were not views shared by many members of the UN General Assembly.  In June 2017, the General Assembly, in resolution 71/292, requested an advisory opinion from the International Court of Justice on whether the decolonisation of Mauritius had been lawfully completed with regards the separation of the Chagos Archipelago.  A second question also arose on the legal consequences of the UK’s “continued administration … of the Chagos Archipelago including with respect to the inability to implement a programme for the resettlement on the Chagos Archipelago of its nationals, in particular those of Chagossian origin”.

In its February 25, 2019 opinion, the ICJ found that “the process of decolonisation of Mauritius was not lawfully completed when that country acceded to independence”.  The UK was “under an obligation to bring to an end its administration of the Chagos Archipelago as rapidly as possible.”  The judges acknowledged resolution 1514 (XV) as “a defining moment in the consolidation of State practice on decolonisation” and that “[b]oth State practice and opinio juris at the relevant time confirm the customary law character of the right to territorial integrity of a non-self-governing territory as a corollary of the right to self-determination.”  No evidence of approval of the practice of an administering power’s detachment of part of a non-self-governing territory, certainly for the purposes of maintaining colonial rule over it, was shown.  “States have consistently emphasised that respect for the territorial integrity of a non-self-governing territory is a key element in the exercise of the right to self-determination under international law.”

The UN affirmed the 13-1 opinion in May 2019, calling upon Britain to “withdraw its colonial administration” within six months and duly acknowledge Chagos as forming “an integral part” of Mauritius.  Eviction orders received that month were ignored by the British, showing that the Anglo-American reverence for the sacred “rules-based international order” can be selectively profane when it needs to be.  “The United Kingdom is not in doubt about our sovereignty over the British Ocean Territory,” insisted Britain’s ambassador to the UN, Karen Pierce.  The territory had never been part of Mauritius and it had “freely entered into an agreement” covering fishing rights and marine resources.  The question left begging here was how the entity could lawfully enter into any arrangements with Britain over Chagos if the territory had never formed the basis of Mauritian control.  The spirit of Neville Chamberlain, one approving the ceding and dividing of territory not his own, is still very much alive.

It is worth nothing that the approval of the ICJ findings, along with international law bodies in general, is very much dependent on favourability towards the great power.  Playground bullies are always bound to ignore them; small states, less likely to.  Just as China refuses to acknowledge the legitimacy of international judicial rulings on its maritime claims, the US and Britain refuse to acknowledge determinations regarding the status of Diego Garcia and the Chagossians.  That’s the rules-based order in international relations for you.