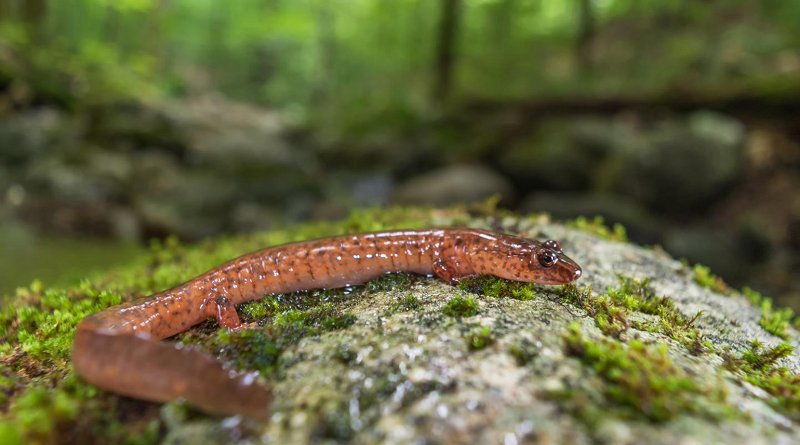 New research from the University of Montana suggests that streamflow variability brought on by climate change will negatively affect the survival of salamanders.

UM biology Professor Winsor Lowe and his partners studied spring salamanders living in five New Hampshire streams. Like many streams around the globe, these waterways are experiencing greater fluctuations between low and high flows brought about by climate change.

The researchers revealed that streamflow variability can kill salamanders while they are metamorphosing from larvae to adults. The work was published recently in the Proceedings of the National Academy of Sciences in an article titled “Hydrologic variability contributes to reduced survival through metamorphosis in a stream salamander.”

“We feel this work is important because it expands our knowledge about the effects of climate change on a diverse group of species that are often overlooked because they spend most of their lives under rocks and logs in small, headwater streams,” Lowe said. “Increasing environmental variability may be especially challenging for species that undergo metamorphosis – like many insects and amphibians – because that’s a vulnerable period when they rely on stable environments for survival.”

He said the research suggests society shouldn’t focus on average conditions as it tries to understand and manage the effects of climate change. Scientists and managers also must pay attention to changes in environmental variability, which may increase with climate change.

“Small headwater streams are home to diverse species and the source of clean water to downstream communities, but these ecosystems are also easy to overlook and are losing protection under proposed Clean Water Act revisions,” Lowe said. “Our work underscores the vulnerability of headwater ecosystems in this era of climate change, the need for protection of vulnerable headwater species, and the value of long-term monitoring efforts.”

Using a 20-year dataset from Merrill Brook in New Hampshire, the researchers showed the abundance of spring salamander adults declined about 50% since 1999, but no trend was noted for larval abundance. Scientists then studied whether streamflow variability at Merrill Brook and streams in the nearby Hubbard Brook Experimental Forest affected the survival of salamanders metamorphosing from larvae to adults. They found that fewer salamanders survived metamorphosis during years when steamflow variability was high, leading to the decline in the adult population.