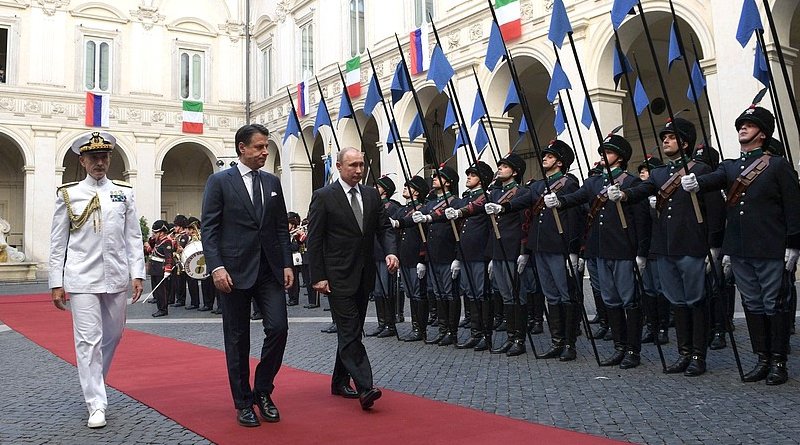 The ceremony for the official meeting of the President of Russia Vladimir Putin and Prime Minister of the Italian Republic Giuseppe Conte. Photo Credit: Kremlin.ru

A number of recent developments presages the beginning of a process that might lead to normalisation of Russo-Western relations.

A day before the G-7 Summit in France in August 2019, President Donald Trump intimated that Russia might be readmitted into the Western Club known as the G-8, from which Moscow was expelled following the annexation of the Crimea. Trump was supported by French President, Emmanuel Macron, the host of the Summit.

Japanese Prime Minister Shinzo Abe was also reported to have said at the Fifth Eastern Economic Forum held in Vladivostok from 4-6 September that he supported Russia’s return to this Club. The United States will host the 2020 G-7. If readmitted into the G-7 (as the G-8), it would mean Russia is back in the Western Club.

Had President Vladimir Putin no real interest in rejoining the Club, he would not have minced his words to reject it outright. Instead, he expressed readiness to host a G-8 summit with China, India and Turkey. The G-7 is unlikely to agree to his suggestion. However, it does open the door to the possibility that Russia would be able to return to the ranks of the developed world.

Another significant development is President Macron’s acceptance of President Putin’s invitation to attend the 75th anniversary celebrations of victory in the Second World War (WWII) on 9 May 2020 in Moscow.

Victory Day, as this annual celebration is described in Russia, is a very important day in the history of post-Soviet Russia. Attendance by any major Western leader at this event would be a significant symbolic boost to President Putin’s standing with his people and to Russia’s prestige − it would be seen as the end of Western isolation of Russia.

The 70th anniversary celebrations five years ago were attended by non-Western leaders like Xi Jinping, India’s Pranab Mukherjee and Venezuela’s Nicolas Maduro. Many Western leaders chose not to attend the event in protest over the issues of the Crimea and eastern Ukraine.

Finally, the Russo-Ukrainian exchange of prisoners in early September and reported Ukrainian agreement to hold elections in the two separatist regions of Ukraine on 1 October 2019, are seen as important steps in the difficult and tense relations between the two countries.

They pave the wave for the possible revival of the Normandy Four format − Russia, France, Germany, Ukraine − to resolve the separatist conflict. President Putin has long been aware that the current state of Russo-Ukrainian relations is a major obstacle to normalising Russia’s relations with the EU.

These three developments do not mean Russia’s political relations with the European Union would quickly return to normal or that EU sanctions would be lifted soon. Nevertheless, the process to normalise relations with Russia is underway.

To major Western countries, China has become a major factor in their calculations towards Russia. Like President Trump, though perhaps to a lesser degree, President Macron has his reservations about China.

He has been quoted as saying that “pushing Russia from Europe is a profound strategic error because we will push Russia either into an isolation that increases tensions or into alliances with other great powers such as China”.

He stressed Russia’s key role in Europe’s security, arguing that “the European continent will never be stable, will never be in security, if we don’t pacify and clarify our relations with Russia”.

The growing Russo-Chinese relationship has obviously become too close for comfort, what with Russia’s prodigious natural wealth, military technology and strength as well as a large market. The worsening state of US-China and US-Russia relations is also not in the overall EU interest, especially in economic terms. US sanctions against Russia and tariffs against China have negatively affected the EU as well. These facts cannot be ignored by its politicians.

The West is also keenly aware that no sustainable and long-term resolutions of the Syria and Iran issues can be achieved without Russian support. Russia has become a crucial factor in the Middle East with its intervention on the side of President Bashir Assad.

While the key EU country, Germany, appears to be committed to ensuring that the current EU stance on relations with Russia does not weaken, it remains an open question how long its present government can maintain this position.

The current constellation of political forces in the country might see some shift in the future, given the seemingly inexorable rise of the right, which now holds 94 seats in the 709-seat Bundestag.

The right, which is mainly represented by the AFD, has also made impressive electoral gains in the September 2019 regional elections in two eastern states. Its leaders have unabashedly expressed sentiments which have been interpreted as pro-Russian.

A questioning of the current political consensus towards Russia could be expected in the coming months and years. Germany’s current leadership cannot totally disregard the right’s standpoint.

Brexit is also bound to divert London’s attention, energies and resources from its current strong position on Russia. That cannot but have an impact on the overall European stance towards Russia.

Finally, President Putin. has domestic political reasons to consider for seeking normalisation with West. That would lead to the lifting of sanctions and help strengthen the economy.

His popularity is weakening; the Levada Centre, a Russian independent polling organisation’s recent survey showed that 38% of those polled did not wish to see him remain in office after his term ends in 2024; 54% wanted him to remain president while 8% were undecided.

The outcome of the recent local and regional elections in the country, including in Moscow, did not lead to any expected crucial change in the political system, despite the relatively large demonstrations in Moscow in the last several weeks before the 8 September Moscow city council elections.

The demonstrators were against the decision of the electoral authorities not to allow opposition candidates to run in the elections, based on technicalities. Nevertheless, President Putin and his supporters cannot totally ignore these developments, given that Moscow is the largest and most developed city in the country; developments there would have socio-political repercussions and an impact across the country.

Normalisation of relations between Russia and the West would be in ASEAN’s interest. It will pave the way for ASEAN to fully engage with Russia without having to consider the ramifications of its actions on its relations with the West, a very important and long-standing partner.

With the current state of US-China relations and competition in ASEAN, an increase in Russian commercial (and political) interest in ASEAN, could only accrue to the region’s benefit.

A Russia whose energy and attention are less focussed on its rivalry with the West, would conceivably be more inclined to devote a portion of them to building its links with ASEAN, as part of its pivot to the East.

*Chris Cheang is a Senior Fellow with the S. Rajaratnam School of International Studies (RSIS), Nanyang Technological University (NTU), Singapore. He had served as a Singapore diplomat in Germany, Russia and the United States.

Home » Russia And The West: Towards Normalization? – Analysis