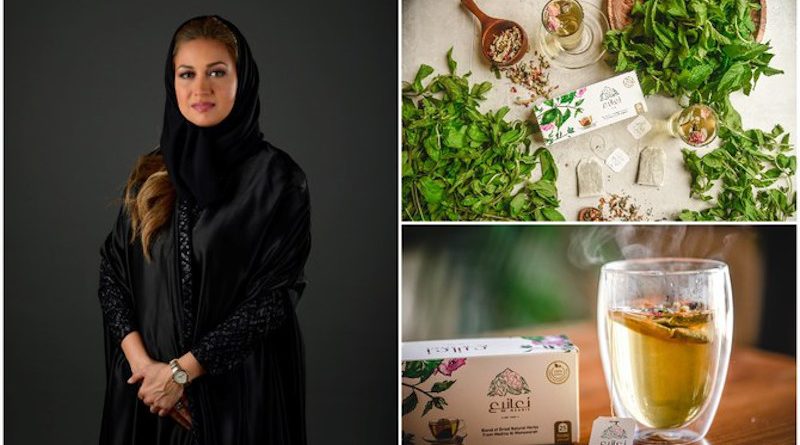 Lamees Madani (L), who created Naanie Tea in Jeddah in 2019, combining a blend of herbs that only grow in Madinah. (Supplied)

Mention Saudi Arabia’s city of Madinah and few will think of the rich variety of herbs that grow in its fertile soil. But for Lamees Madani, who traces her own roots to the holy city, the two are inseparable.

Besides being the one of the three holiest cities in Islam, Madinah is the capital of Saudi Arabia’s Madinah region. While its 1.5 million residents mostly live in the urban area, the city also boasts the Hejaz mountain range, empty valleys, agricultural spaces, older dormant volcanoes and the Nafud desert.

“I wasn’t born in Madinah, but I am originally from there,” Madani told Arab News. “I grew up there in my grandfather’s and uncle’s houses and they used to add these special herbs to their tea. The idea came from this heritage.”

Madani created Naanie Tea in Jeddah in 2019, combining a blend of herbs that only grow in Madinah. “They have different aromas and names, and they’re all from the ‘naanaa’ (mint in Arabic) family,” she said. “Some of them are called etra (lemongrass), dosh and habag.”

Her business idea is steeped in the heritage of Madinah, where locals have long grown a variety of herbs in their farms and gardens for use in cookery, seasoning and drinks — especially tea.

“The story comes from this background and the heritage of older people who used to do this for tea time,” Madani said.

Depending on the season, Madani uses six different herbs from three organic farms, dries them and then blends them in a single teabag. Her aim is to make the unique flavors of Madinah convenient and accessible to customers far and wide.

“The idea is to make it easy for people who love Madinah and love the taste of these herbs, but can’t get them easily,” Madani said. “For people living abroad, or while traveling, it’s practical and easy to use. It’s also 100 percent natural, with no caffeine, preservatives or added sugar. It’s a blend of different natural organic herbs that form an infusion.”

Born in the US city of Tucson in Arizona, where her father was studying a Ph.D., Madani moved to Jeddah at the age of two. It was there she earned a bachelor’s degree in early childhood studies at the King Abdul Aziz University, and later obtained a master’s degree.

After a couple of years working at a kindergarten, Madani began her career at Effat University, which takes its name from Queen Effat, who pioneered women’s education in Saudi Arabia. There, she mainly served the university’s communications and public relations department.

Five years in communications at Jeddah Port then followed, by which time Madani felt it was time for a change. “I found I’d had enough of working for others and thought I needed to start my own business,” she said.

“The idea for Naanie Tea was in my mind from the very beginning. I took some courses in e-commerce. The idea was cooked there, and I started on a very small scale by testing the blends at home with all my friends and family.”

Right from the start, Naanie Tea caused a stir in the Kingdom. “People loved it so much,” Madani said. “It’s the first of its kind in the Saudi and Arab markets, and I’m stunned that nobody has ever thought of making use of these unique herbs. Everybody loves them, and they’ve been there for millennia.”

So far, one blend is available across seven branches of Manuel Market in Jeddah and 11 stores in Riyadh, with plans underway for another product line. Boxes can also be ordered online and delivered anywhere in the Kingdom.

Madani said her dream is to see her brand sold across the Arab world. “Muslims love having something from Madinah. And for non-Muslims, it’s about having something organic, natural, healthy and traditional,” she told Arab News. “I’d love to see it in all capitals and hotels in the world, and restaurants, gyms and health centers.”

Priced at SR38 ($10) a box, the tea is more expensive than other commercial brands, mainly because the ingredients are organic and grown at a select few farms in Madinah. The process is also labor intensive. “It goes through a very delicate, long and handmade process,” Madani said. “Then, I send it to the factory in Jeddah where it is packaged and designed.”Volume 90%

The brand has proved a particular hit with consumers looking for a healthy detox. “People are getting healthier. They’re leading a more health-conscious lifestyle and trying to cut down on caffeine and sugar,” she said.

Madani’s business success is part of a wider trend in Saudi society, where untapped creativity is finally getting the encouragement it needs. Saudi Vision 2030, the kingdom’s plan to diversify its economy, has offered young entrepreneurs the means to develop their brands and ideas.

To know that exciting times lie ahead does not require reading tea leaves any more. “Saudi Arabia is changing dramatically — the market is full of local brands in every single sector and everything is booming now. Saudis are so enthusiastic,” Madani said.

“Across the country, there are so many local brands, amazing and creative ideas, and young people, and in a few years’ time you will see a lot more.”