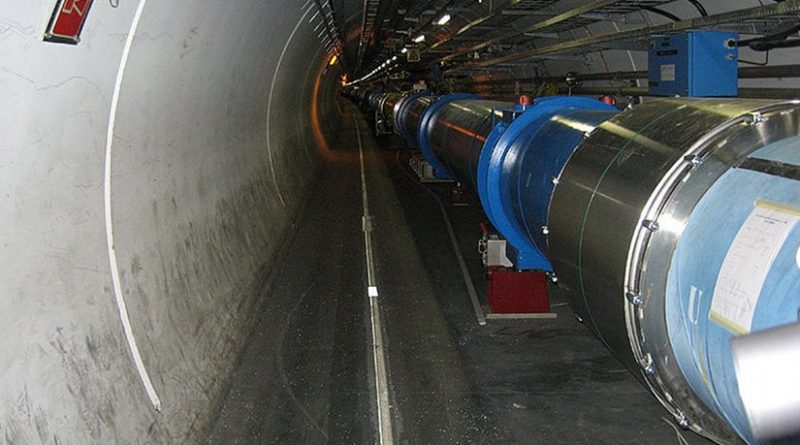 A section of the LHC (Large Hadron Collider). Photo by alpinethread, Wikipedia Commons.

Designs to upgrade to the Large Hadron Collider (LHC) in Switzerland in order to boost the accelerator’s discovery potential have been completed. Thanks to the EU-funded HILUMI LHC design project, industrial prototypes for various parts of the accelerator can now be developed before the construction phase begins in around 2020, with the end goal of increasing the facility’s luminosity by a factor of ten.

Completion of the design phase has created new opportunities for Europe’s hi-tech industries to bid for contracts worth an estimated EUR 300 million during the second half of this decade. The success of the project has also firmly established the European Research Area as a focal point for global research cooperation and a leader in frontier knowledge and technologies.

The LHC is the world’s biggest and most powerful particle accelerator. Built under the Swiss-French border by the European Organisation for Nuclear Research (CERN), the LHC is a giant circular underground tunnel some 27 kilometres long, designed to carry out complicated particle experiments to better understand the universe.

Greater luminosity will enable the accelerator to carry out a greater number of particle collisions, increasing the chances of physicists identifying a particle or process that they have not seen before. Once completed for example, the High-Luminosity LHC will produce 15 million Higgs bosons per year, compared to the 1.2 million in total created at the LHC between 2011 and 2012. Scientists will also be able to observe rare processes that occur below the current sensitivity level of the LHC.

As a highly complex and optimised machine, the LHC requires an upgrade involving careful study and planning. Starting in November 2011, the HILUMI LHC project brought together a large number of laboratories from CERN’s member states, as well as from Russia, Japan and the US, in order to investigate the potential of new cutting-edge technologies. In total, some 200 scientists from 20 countries collaborated during the four-year design phase, which was officially completed at the end of October 2015.

The upgrade will involve several breakthrough technologies that are currently under development. A total of 1.2 km of the LHC will be replaced, with new superconducting magnets installed. These will help to focus the beam, increasing the probability of collisions occurring. Brand new superconducting radiofrequency cavities – called crab cavities – will be also used to orientate the beam before collisions in order to increase the length of the area where the beams overlap.