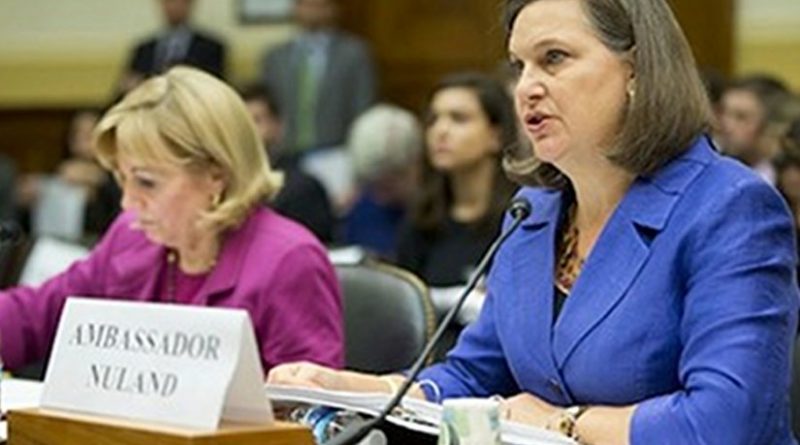 Wednesday’s hearing in the House Foreign Affairs Committee was a comedy of errors, starting with the loaded title: “US Policy After Russia’s Escalation in Syria.” The hearing featured two Assistant Secretaries of State as witnesses, Victoria “cookies” Nuland, in charge of European and Eurasian Affairs, and Anne Patterson with Near Eastern Affairs duty at State.

No, a Russian entry in the conflict in response to a request from the legal and sovereign Syrian government, which in a month has crippled jihadists from al-Nusra to ISIS, is considered by the US to be “escalation.” Doing effectively in a month what the US has claimed to be doing for a year is considered “escalation.” We recall President George W. Bush’s famous, “you’re either with us or you are against us.” But with Nuland, Russia is against us even when it is with us…

Why? Because in addition to attacks on ISIS east of the zone controlled by the Syrian government, the Russians have also done damage to US-backed (and al-Qaeda affiliated) rebels north of Syrian government controlled territory leading to Syria’s second city, Aleppo, and then on to the Turkish border — an area that might otherwise be known as the jihadist superhighway.

Russia taking out ISIS and the other extremist groups in Syria — including those backed by the US —  is not tolerable to Nuland, a member of the neocon Kagan family. For Nuland and the Kagans, war is great for business. Her husband Robert Kagan is at Brookings, from where he regularly writes in the Washington Post that we need to increase military spending. His wife steers US policy toward her husband’s goals. Brother-in-law and sister-in-law Fred and Kimberly are at neocon American Enterprise Institute and Institute for the Study of War, respectively, where they do their part for the family business: pushing hate and war across the globe.

In her testimony before the House Foreign Affairs Committee this week, Nuland did a remarkable turnaround. With the Russian entry into the fight against jihadists in Syria, Nuland suddenly became concerned with refugees, “collateral damage,” economic cost of intervention, human suffering, and more. Not a word about these for the past year as US bombs flew. No, she is only concerned with these things if they come about as a result of Russian airstrikes.

While polls show solid support even among American citizens for Russian attacks on Islamic extremists, Victoria Nuland told Congress this week that:

Russia is paying a steep price to its reputation in the fight against terror.

Such an assertion doesn’t pass the laugh test.

Victoria Nuland does offer Russia some hope for redemption, however. Russia could choose the path of “positive cooperation,” Nuland told the House Foreign Affairs Committee, but it would require that Russia:

…urgently work with us, our Allies and UN envoy Steffan De Mistura to turn the statement of principles that Secretary Kerry, FM Lavrov, and 17 other ministers and institutions released in Vienna last Friday into a true ceasefire, and a parallel 3 political transition process that hastens the day that Asad’s bloody tenure comes to an end.

Is it any wonder US diplomacy has become a laughingstock?