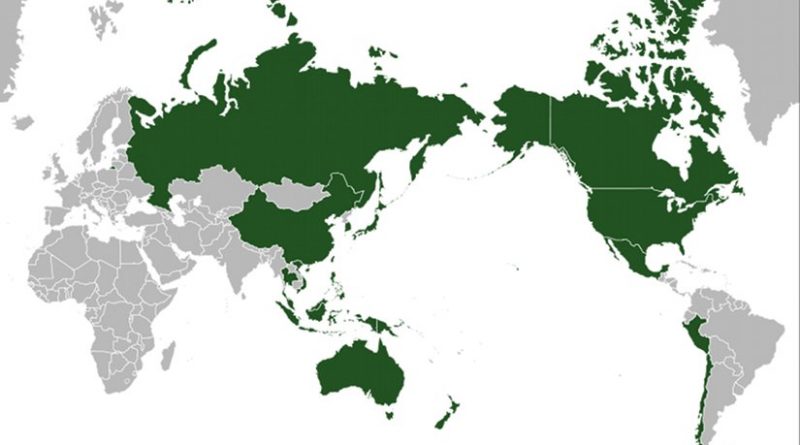 Asia-Pacific Economic Cooperation (APEC) is an economic forum containing 21 economies of Asia-Pacific region. Its members are home to around to 2.8 billion people and account for nearly 60% of global GDP and 48% of global trade and 53% of foreign direct investment.

In such exasperating situation China is offering the liberal economic order which can promote an open multilateral economic system and facilitate trade and investment without any obstacles.

China is interested to link One Belt and One Road initiative with all regional organizations including APEC.

China is also interested to develop cooperation framework for the promotion of cross border e-commerce. It has offered the Asia-Pacific “Model of E-port Network” to create better information sharing system among regional ports.

However, Beijing firmly believes in ‘One Country, Two System’ but it always promoted Taipei to participate different regional and international economic events. APEC summit is also part of that policy in which Taipei participates as separate economic entity.

Taipei is playing an active role in each annual summit of APEC, and further making connectivity with other member economies (APEC members are referred to not as countries but economies).

APEC is much more than a regional forum for Taipei because she is providing a valuable platform to local officials to make direct contact with all developing and developed economies.

Since Tsai Ing-wen was elected, the communication gap between Beijing and Taipei has been increased. China believes she wants formal independence for Taiwan, which is unacceptable for Beijing at any cost.

Taipei usually sends a senior official to APEC summits for participation. In the upcoming summit James Soong is going to represent Taipei.

During the media talk James Soong said that Taiwan is willing to engage and cooperate with Beijing. He further said that “moreover, we also need to say that both sides of the Taiwan Strait should have some constructive dialogue, and he plans to convey the island’s desire for peace, stability and exchange when he speaks to President Xi Jinping.”

The meeting between Soong and President Xi is not yet confirmed, but if it will happen, it will be less than a month after the Communist Party of China (CPC) elected a new leadership is at its key party congress.

During the CPC congress, President Xi clearly gave a peaceful message of sharing development with ‘peaceful unification’ and describing people on the two sides of the Taiwan Strait as brothers and sisters.

After President Xi’s speech, Tsai Ing-wen has also softened her approach and said that “Chinese officials to work with the island and pushed the message that a breakthrough in cross-strait relations would benefit both sides in the long term”.

If we look back to history we will find that APEC was established to take advantage of increasing interdependence among Asia-Pacific economies and to build strong regional integration. It was/is an actual sense of common community.

The concept of common community can play vital role here in this APEC summit. Beijing and Taipei can work together in a legitimate way; as long as they follow the assured etiquettes they will get more confidence and trust.

Taipei envoy James Soong maybe find good to interact directly with President Xi through APEC summit. This direct contact may cut the chances of those detractors who are not willing to see the shared future of Beijing and Taipei and defiantly increase reconciliation chances for cross-strait.

Dr. Imran Ali Sandano is an author of "Sufism and Peace: A Counter Strategy of Extremism" and "Separatist Movement of Balochistan: A Non Traditional Security Threat" books. Currently, he is working as Senior Research Fellow at Nontraditional Security and Peaceful Development Zhejiang University, Hangzhou, China. His areas of interest are nontraditional security issues, terrorism, and conflict resolution, diplomacy, and Sufism. Dr. Sandano is a regular writer of different newspapers and weekly magazines. He holds PhD degree in Nontraditional Security Management, M.Phil degree in Peace and Conflict Studies, Masters in International Relations. He can be reached at [email protected] Tweeter iiimran110.