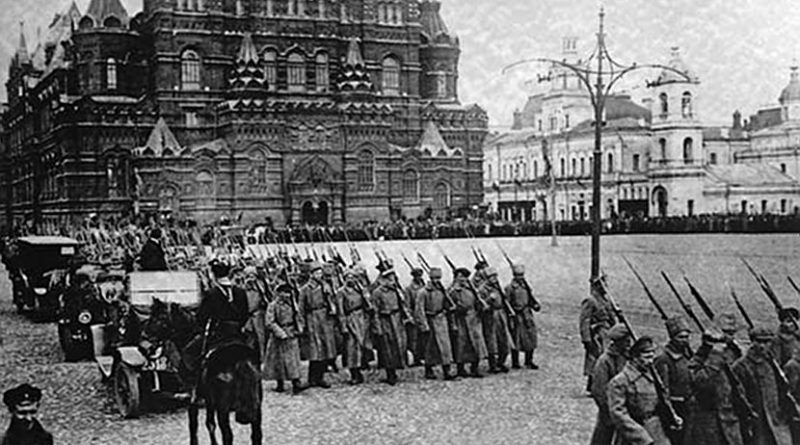 November 7, 2017, marks the one hundredth anniversary of the Russian (or Bolshevik) Revolution in Russia that happened on that date in November 1917, which lead to the communist “dictatorship of the proletariat” and ushered in an epoch of totalitarian tyranny and mass murder both in Russia and in every other country where socialism was put into practice.

Historians estimate that as many as 150 million people, if not more — innocent men, women and children — were killed in the name of building the collectivist utopia. They were shot, tortured, worked or starved to death in prison cells, in interrogation rooms, in labor camps, or just in the places where they lived. “Socialism-in-practice” created a chamber of horrors in which the individual was reduced to a mere expendable “cog in the wheel” to serve the collective good, or made into “enemies of the people” to be eliminated as the prelude to building the “bright, beautiful communist future.”

In the name of a “classless society,” communism created the most minute and granulated system of privilege, favor, and power, depending upon where the individual stood in the hierarchies of the Communist Party and the management of the vast central planning bureaucracy. “Special” food and clothing stores, “special” clinics and hospitals, “special” apartments and country houses, “special” resort and recreational facilities and vacation sites, “special” opportunities (with Party permission) to visit the forbidden and decadent “West,” and to bring back some of the “bourgeois” goods unavailable in the “workers’ paradise.”

The Communist Party did all in their power to control and confine the minds of those over whom they ruled into narrow corridors of knowledge and belief so little or no doubt could arise that theirs was the best of all worlds, and far more “socially just” and materially better than anything existing in the reactionary and corrupted capitalist parts of the globe.

If for a younger generation born after 1991 — the year the Soviet Union disappeared from the face of the world map — this all seems like ancient history that has no relevance or meaning for their lives (and especially so since so little is told about that Soviet chamber of horrors in school history books, or the mainstream opinion magazines and newspapers), its significance is no less important to know and a lesson not to be forgotten.

Prophets of the Socialist Destruction and Dictatorship-to-Come

Six years before Karl Marx and Frederick Engels published their famous, The Communist Manifesto, in 1848, the renowned German poet, Heinrich Heine (1797–1856), wrote the following in 1842:

Communism is the secret name of the dread antagonist setting proletariat rule with all its consequences against the present bourgeois regime. It will be a frightful duel. How will it end? No one knows but the gods and goddesses acquainted with the future. We only know this much: Communism, though little discussed now and loitering in hidden garrets on miserable straw pallets, is the dark hero destined for a great, if temporary, role in the modern tragedy. … Will the old absolutist traditions reenter the stage, though in a new costume and with new cues and slogans? How could that drama end?

Wild gloomy times are roaring toward us, and a prophet wishing to write a new apocalypse would have to invent entirely new beasts. … The future smells of Russian leather, blood, godlessness, and many whippings. I would advise our grandchildren to be born with very thick skins on their backs.

Others gave warnings about what would be in store if the false fantasies of socialism were to be followed and introduced into any society. The nineteenth century French classical liberal economist, Paul Leroy-Beaulieu (1843-1916), gave warning in his important work, Collectivism (1885):

How can liberty exist in a society in which everyone would be an employee of the state brigaded in squadrons from which there would be no escape, dependent upon a system of official classification for promotion, and for all the amenities of life! . . . The employee (and all would be employees) would the slave, not of the state, which is merely an abstraction, but of the politicians who possessed themselves of power.

A heavy yoke would be imposed upon all, and since no free printing presses would exist, it would be impossible to obtain publicity for criticism or for grievances without consent of the government. The press censure exercised in [Imperial] Russia would be liberty itself compared to that which would be the inevitable accompaniment of collectivism. … A tyranny such as has never been hitherto experienced, would close all mouths and bend all necks.

Never were there prophecies more prescient than Heine and Leroy-Beaulieu’s many decades before the Bolshevik Revolution. The stench of oppression and death surrounds the notion of how socialism views man and mankind. The noted Russian mathematician, Igor Shafarevich (1923–2017), who spent years in the GULAG labor camps for his opposition to the Soviet regime, concluded his study of The Socialist Phenomenon (1975) with this telling interpretation of the nature of the communist system:

To begin with, most socialist doctrines and movements are literally saturated with the mood of death, catastrophe and destruction. … The death of mankind is not only a conceivable result of the triumph of socialism – it constitutes the goal of socialism. …

Understanding socialism as one of the manifestations of the allure of death explains its hostility toward individuality, its desire to destroy those forces which support and strengthen human personality: religion, culture, family, individual property. It is consistent with the tendency to reduce man to the level of a cog in the state mechanism of non-individual features, such as production or class interest.

Indeed, one of the reasons why the Marxian variations on the socialist theme appealed to so many around the world was due to its more universal attraction compared to National Socialism. The Nazi ideal was reserved for a “racially pure” German people, with the rest of humanity viewed as genetic inferiors to be slaughtered or enslaved for the benefit of a “master race.”

Marxian-type socialism, on the other hand, claimed to be speaking for the large mass of humanity  — against a handful of profit-oriented exploiting capitalists (the “one percent”). Thus, it called upon all people, everywhere, suffering under the minority of property owning capitalists, to rise up in the name of “social justice” and a collectivist utopia that promised a “better world” for all mankind (except for the minority of “exploiters” everywhere who were to be expropriated and liquidated).

National Socialism was never going to attract followers, fighters and fanatics outside of those who were classified and identified as among the chosen, based on “genes” and “blood” making them part of the German master race.  But Marxian socialism called upon all people, everywhere, who were “the workers” forced to be “wage slaves” at the command of the narrow “social class” of capitalist owners of the means of production to rise up and throw off their “chains” in a revolution for a “workers’ state” of collective ownership and central planning for the benefit of “the masses.”

This is what made Marxian socialism in its manifestations of political states such as the Soviet Union a universal threat to individual liberty and economic freedom. Its followers could be and were everywhere. Their ideological fanaticism on behalf of totalitarian collectivism made them place no value on truth, humanity or individual life, even their own. Sacrifice for “the collective” made them and all others expendable for the utopia to come. This is what led to the willingness to kill tens of millions. If the group — the “social class” — is what really exists and has meaning and value, then the individual is the illusion and has no worth and significance. On to the ash heap of history go those who must be sacrificed for wonderful world to come.

Though Soviet communism came to an end slightly more than a quarter of a century ago, the ghost of the spirit of communism lives on around the world. It is not so much that many people intentionally want to be straightjacketed within the confines of a Soviet-style totalitarian state, or that they wish to wait on the tiring and unending lines at “people’s” retail stores for meager supplies of everyday necessities of life as was the case behind “the Iron Curtain,” or exist in fear that it could be tonight that the secret police might come to take you away to an unknown but frightfully imaginable fate.

Most people, especially in the United States, don’t see this as the inescapable future of a socialist system fully imposed and implemented because so few have any knowledge or awareness that this was how tens of millions, hundreds of millions lived under socialist regimes as the coerced and controlled worker bees in the collectivist hive commanded by the ruling Communist Party “vanguard of the revolution.”

The “specter” of communism, nonetheless, continues to haunt the world in the form of the Marxian critique of capitalist society: Workers are exploited by the capitalist employers; profits are ill-gotten gains at the expense of the rest of society; a handful of property owning capitalists rule over the mass of society with no benefit for “the people” from their manufactured and marketed goods; the capitalist property owners plunder the earth and spoil the environment; the capitalist system is inherently racist and sexist in its structure and methods. The list could go on and on.

The battle between the ideologies of freedom and individualism versus political planning and collectivism, therefore, continues in slightly different forms and permutations than those expressed in the communist slogans and ideological language of 1917 and after. But the combat is no less real and is no less the same at its foundational basis.

Originally published by the Future of Freedom Foundation.

About the author:
*Dr. Richard M. Ebeling is the recently appointed BB&T Distinguished Professor of Ethics and Free Enterprise Leadership at The Citadel. He will be conducting courses such as “Leadership, Entrepreneurship, and Capitalist Ethics” as well as “The Morality and Economics of Capitalist Society.”

One thought on “Disaster In Red: The Hundredth Anniversary Of The Russian Socialist Revolution – OpEd”