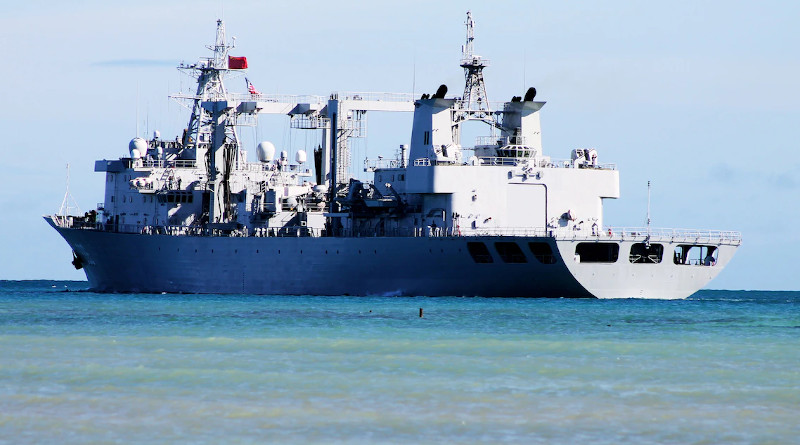 The Chinese legislature has drafted a new law granting the coast guard permission to use weapons within the country’s “jurisdictional waters,” opening the possibility of coastguard ships using more explicit armed force in disputed areas of the South China Sea.

China’s Central Military Commission, which oversees the armed forces, first proposed the law in late September. A draft text was subsequently released by China’s legislative body, the National People’s Congress, on Wednesday, as first reported by the National People’s Congress Observer website. The measure is open for public comment until Dec. 3, after which it could be passed into law.

Hunter Stires, a fellow with the U.S. Naval War College, said the new law was “designed to intimidate.”

“The  [Chinese Communist Party] is trying to tell other claimant governments that China means business,” he said in an interview. “This is a signal not to challenge China Coast Guard operations in waters that are rightfully the exclusive economic zones of Southeast Asian nations.”

Notably, the law explicitly states that China’s coastguard and other maritime law enforcement agencies may use small arms, such as rifles, or shipborne-weapons, such as deck-mounted guns, when encountering a ship determined to be acting “illegally” in “jurisdictional waters,” although not without some degree of caution.

“The staff of a maritime law enforcement agency shall determine the nature, degree and urgency of the perpetrator of a crime, and exercise reasonable judgment in the use of weapons,” the draft states in section six, which describes revisions to use of force and permissions for maritime law enforcement agencies. “For weapons, shooting at areas below the waterline of a ship should be avoided as much as possible.”

Deck-mounted guns are expressly allowed to be used for “counter-terrorism” operations, when facing “violence” at sea, or when law enforcement agencies aren’t obeyed or are obstructed.

There is no concrete definition of “jurisdictional waters,” nor does China explicitly state what areas it considers to be covered under that term. But China has previously attempted to exercise jurisdiction as far afield as the waters off Fiery Cross Reef, in the Spratly archipelago section of the South China Sea.

The China Coast Guard and Ministry of Public Security arrested suspected drug traffickers there in September. This was despite the fact China does not, under international law, have any economic or legal rights to those waters, and they are still disputed between China and six other governments.

China claims to hold sovereignty over nearly the entirety of the South China Sea on the basis of “historic rights,” including over land features and the waters between them.

However, six other Asian governments have territorial claims or maritime boundaries in the South China Sea that overlap with the sweeping claims of China. They are Brunei, Indonesia, Malaysia, the Philippines, Taiwan and Vietnam.

While Indonesia does not regard itself as a party to the South China Sea dispute, Beijing claims historic rights to parts of that sea overlapping Indonesia’s exclusive economic zone.

“The primary target of this move and China’s activity in the South China Sea writ large are the more than 3.7 million local civilian mariners who depend on access to the South China Sea for their daily livelihood,” Stires said. The Chinese Communist Party knows that it is the behavior and de-facto acceptance by this large civilian population that will decide whether [The United Nations Convention on the Law of the Sea] remains in force in the South China Sea or is usurped by China’s hierarchical and continental vision of maritime sovereignty.”

Since a pivotal restructuring in 2018, the CCG has been a constituent part of the People’s Armed Police, a branch of the Chinese military under the Central Military Commission. The CCG is therefore part of China’s armed forces.

The civilian functions normally associated with other countries’ coastguard agencies, such as search-and-rescue operations and traffic control at ports or waterways, are handled by other agencies like the Ministry of Transport’s Maritime Safety Administration.