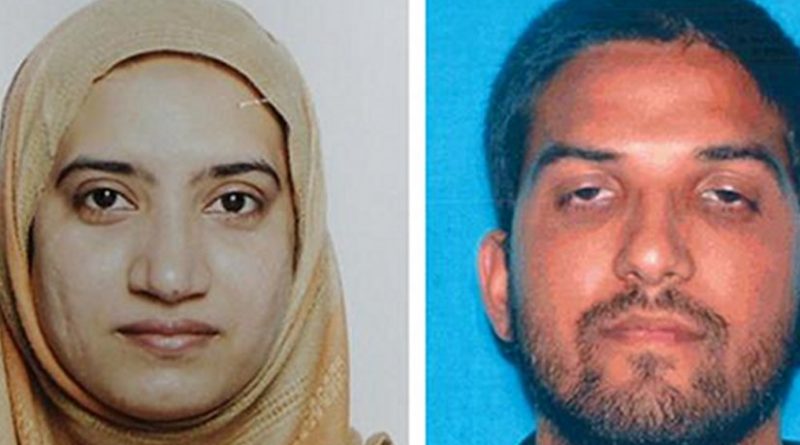 On the morning of December 2, gunfire was reported at the Inland Regional Center in San Bernardino, California. The events of the following five hours resulted in 16 deaths, including the two suspected shooters, and 21 wounded, including two police officers. The FBI has confirmed it will be investigating the events in San Bernardino as an act of terrorism, making this the 75th Islamist-inspired terrorist attack or plot in the U.S. since 9/11.[1]

While a motive has not been confirmed amidst the ongoing investigation, there are reports connecting the suspected shooters with confirmed terrorists in the Islamic State of Iraq and Syria (ISIS).[2] This will be the 12th domestic terror attack or plot in 2015—adding to the greatest number of attacks or plots in a single year over the past 14 years.

After leaving a morning holiday party at his place of employment, Syed Rizwan Farook, with his wife Tashfeen Malik, returned between 10 to 30 minutes later. After shooting up to 75 rounds at Farook’s co-workers, the suspects fled the scene of the attack. Police, unable to immediately identify the attackers, began looking for three suspected shooters reported to have escaped in a black SUV. Hours after the incident began, police located the black SUV and then engaged in a roadside shootout with the suspects that ended with the deaths of Farook and Malik.

Information released in later reports reveals that police found in possession of the couple the following items: tactical gear, .233-caliber rifles, handguns, and 1,600 rounds of ammunition at their time of capture; as well as an additional 3,000 rounds of ammo and 12 pipe bombs at their place of residence.

Self-radicalization or Outside Influence?

The first suspect, 28-year-old Syed Rizwan Farook, was a U.S. citizen. He married Tashfeen Malik, 27, after meeting on an online dating site and during a pilgrimage to Saudi Arabia in 2013. Malik had reportedly been living there after moving from Pakistan in the late 2000s.

According to family and personal witnesses, Farook was a “normal guy”—“living the American Dream.”[3] According to the FBI, however, the shooters did make contact with known suspected terrorists, and Malik may have also pledged allegiance to ISIS leader Abu Bakr al-Baghdadi.[4] Malik may also be a leading source for radicalizing Farook—as it is reported she began posting radicalized statements online as early as 2007.

Prior to the events in San Bernardino, there have been 74 Islamist-inspired terror attacks and plots in the U.S. since 9/11. This is the 64th terrorist attack or plot that has been perpetrated by self-radicalized U.S. citizens.

President Barack Obama and Attorney General Loretta Lynch, in separate speeches over the past week, have reminded citizens that assaults like these are carried out by radicalized terrorists and not reflective of the teachings and beliefs of most Muslims.

In his address from the Oval Office the Sunday following the San Bernadino attack, President Obama noted that “it is clear that the two of them had gone down the dark path of radicalization, embracing a perverted interpretation of Islam that calls for war against America and the West.”[5]

The attack comes at a difficult time, as countries across the globe question their ability to accept mostly Muslim refugees displaced by ongoing conflict in Syria, the regime of President Bashar al-Assad, and the terror of ISIS.

The U.S. needs to simultaneously continue its battle against terrorist organizations abroad, while at the same time keeping those are who are easily impressionable within the U.S. from becoming radicalized. The two issues cannot be addressed separately. The Western world will remain strong in the face of these radical terrorists, but it should also have leadership that will show resolve in fighting any future threats to our national security.

About the author:
*Riley Walters is a Research Assistant in the Douglas and Sarah Allison Center for Foreign and National Security Policy, of the Kathryn and Shelby Cullom Davis Institute for National Security and Foreign Policy, at The Heritage Foundation.