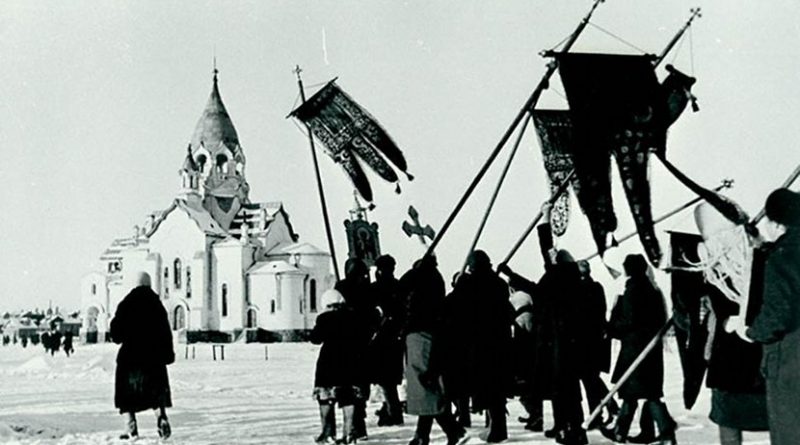 Orthodox cross procession in Northwest Russia, 1942. That the Germans opened the churches closed by the Bolshevik was well received by a religious peasantry. Source: The Russian state archive for film and photo documentation, 3/261/5.

Ethnic Russians were much less loyal to the Soviet regime in their encounters with the German occupiers than historians have believed up to now. This is the story told by UiO researcher Johannes Due Enstad, who has recently published a book about the German occupation of Northwest Russia during World War II.

After World War II the Soviet Union created a grandiose history of how all the inhabitants of the Soviet Union were loyal to the regime and formed a common front against the Germans in the “Great Patriotic War”.

It has been common knowledge for a long time that this is an untrue story, because many Baltic and Ukrainian people despised the Bolshevik regime. At the same time, western historians have largely agreed that the ethnic Russians were loyal to the Stalin regime when the Germans invaded the Soviet Union in 1941.

According to Enstad, who is a post-doc at the Department of Literature, Area Studies and European Languages at the University of Oslo, it is time to crack this myth apart. In a book recently published by the academic publishers Cambridge University Press, he addresses which side the people of Northwest Russia chose during the German occupation.

“This area can, in both historical and geographical terms, be seen as a Russian core area and has been part of the Soviet state since the revolution. Nevertheless people – especially the peasants in the countryside, who accounted for 90% of the population – were much less loyal to the regime and the Soviet state than has been thought,” explains Enstad.

Gave Christmas gifts to the occupiers

Something that happened in December 1941, six months after the start of the German occupation, illustrates the positive reaction quite well. During that time people from some of the small villages collected several thousand woollen socks, mittens and felt boots as Christmas gifts for the German soldiers.​

Inside one of the socks there was a note signed by a Russian by the name of Mikhail Nikiforov:

“I am sending these socks as a gift to the invincible German army and pray that you defeat the Bolsheviks so that they are eradicated forever, and also for a quick victory and a safe journey home”.

“This is just one of a number of similar sources expressing a hope that the Germans would defeat the Soviet regime and contribute to a better life for the Russians,” Enstad explains and adds:

“At the same time we can note that the Germans were wished a safe journey home. No-one wanted them to stay and take over the country. This shows there was some patriotism here, but this was primarily linked to the Russian fatherland and not the Soviet regime.”

But why did so many Russians show such a benevolent attitude towards the occupation force?

“Stalin had failed to generate a strong bond of faith between the Russian peasants and the regime. On the contrary, he was much hated by many peasants who had seen their lives go from bad to worse because of the collective farming the regime had implemented with great brutality,” Enstad explains.

A source from the book puts it like this: “My forefathers were prosperous farmers; the Bolsheviks made them into slaves and beggars”.

From 1929 onwards, the farmers were forced into collective farms – kolkhozes – often under slave-like conditions. Kulaks – affluent farmers – should be eliminated as a social class, according to Stalinist ideology.

This policy also hit hard in Northwest Russia. During the period 1930-1933, there were more than 125,000 farmers in the area who lost their citizenship rights, were deported to Siberia or were simply shot. The policy also led to a disaster for the harvests; there were famines in 1936-1937 and during the winter of 1940.

In 1937-1938 the “Great Terror” arrived, where Stalin, in an unbelievably brutal fashion, acted to get rid of all who might be thought of or imagined as opponents of the regime.

Given such a backdrop, it is possible to understand why so many Russians put their trust in the Germans. One good example is a letter written to “Der Führer” by the inhabitants of three small villages in the autumn of 1941:

“We give our most sincere thanks for liberating us from Stalin’s lackeys and collective farms. On the 10th of July the German Armed Forces – your Wehrmacht – freed us from the yoke of the dammed communists, the political leaders and the Stalinist government. […] We will fight against the communists together with your troops. We give thanks to the German Army for our liberty […] and ask that this message is delivered to our liberator Adolf Hitler.”

When the Red Army and the party apparatus fled from Northwest Russia, the farmers claimed their rights and dissolved the collective farms. Further south, in the fertile black earth region, the Germans maintained the collectives, so as to stay in control of the rich crops. In the North West region, where the earth was less fertile, they accepted the dissolution and introduced a “semi private” agriculture.

According to Enstad, this German agricultural policy was the main reason why the positive attitude to the occupants lasted as long as it did.

During the winter of 1941-1942, there was famine in a number of areas close to the front line and the population of Leningrad suffered greatly. However, behind the front line – and especially in the countryside – it is believed that a large part of the population had better access to food than was the case prior to the German invasion.

“This was due to the private farms being more efficient and the fact that it was difficult for the Germans to control the agricultural production in detail. It was easier for the farmers to hide part of the crops than it had been earlier”, says Enstad.

A Russian journalist, who travelled in the occupied areas, expressed it like this: “Compared to the ‘government for the workers and the farmers’, the Germans were simply dilettantes when it came to the art of plundering the countryside”.

“Many sources interviewed after the war tell us that, in a material sense too, they were better off during the German occupation than during the years after the Germans were chased into retreat,” says Enstad.

Another reason for the relative popularity of the occupiers was their policy on religion. They re-opened the churches the Soviet regime had closed, something which caused something close to a religious renaissance for the Russian orthodox church and a real revival movement in parts of the occupied areas.

“This shows that the Stalinist oppression of the church in no way managed to break the religiousness in the peasant populations. The Russian orthodox faith was still a completely central part of their identity,” Enstad explains.

He says that many priests openly supported the occupants and prayed for a German victory in their sermons.

“At the same time this acted as a double-edged sword for the Germans. Opening the churches led to increasing Russian nationalism and a growing feeling that the Russians should not live under the rule of strangers,” he says.

​Enstad’s sources are in the main first-hand sources collected from German and Russian state archives.

“These were reports by the German military units responsible for the occupied areas and intelligence from Russian partisans operating behind the German lines,” explains the researcher.

German and Russian reports gave a totally opposite picture of the mood of the population, however in Enstad’s opinion there are good reasons to believe that the German sources were closer to the truth.

“The Germans reported in a Prussian, matter of fact style, being open about both progress and setbacks. The partisans, however, reported using an idealised image of what was desired, exaggerated the number of Germans killed and generally expressed what they knew Moscow wanted to hear – that all Soviet citizens were loyal to the state.

Enstad also used diaries, memoirs and interviews, conducted after the war, with people who experienced the German occupation of Northwest Russia. These sources also show that the Germans were given a much warmer welcome than both Soviet propaganda and western historians have claimed.

With what we now know about the Nazi view of the Russians as Slavic “subhumans” and about the plans to use Eastern Europe as “Lebensraum” – living space – for the German thousand-year Reich, the Russian reactions to the invasion may appear to be naive.

However, Enstad emphasises that they did not know then what we know today. And even if many got to hear about atrocities like the murder of Jews, gypsies and the mentally ill, there were also many who just brushed the stories of German brutality aside as Bolshevik propaganda. Russians were used to being fed information that they could not trust from the Soviet state.

For Russians who were living under an unspoken but constant threat of being deported to Siberia for having done something that could be interpreted as opposition to the regime, the risk of being coerced into slavery by the Germans was in reality not anything new.

But little by little, many realised that Hitler was not much better than Stalin. A particularly deep impression was provided by the inhuman treatment of Russian prisoners of war: tens of thousands starved to death in prison camps in Northwest Russia during the first months of 1942.

“Nevertheless there was no marked change in the Russians’ view of the occupiers until the autumn of 1943, when it became more and more clear that a German retreat was coming. There was then a marked increase in the passive and active opposition to the occupiers”, says Enstad.

He is of the opinion that when people live in an area where two warring fractions are fighting for mastery, it is natural to adapt to the one that is in power at any given time – and avoid confrontation as far as is humanly possible.

“Even so, this ‘calculated pragmatism’ cannot fully explain the positive reception the Germans received from large parts of the population in occupied Northwest Russia. This was first and foremost due to the great discontent with the Stalin regime and the peasants were hoping that the Germans would remove the Bolsheviks from power,” says Enstad.​