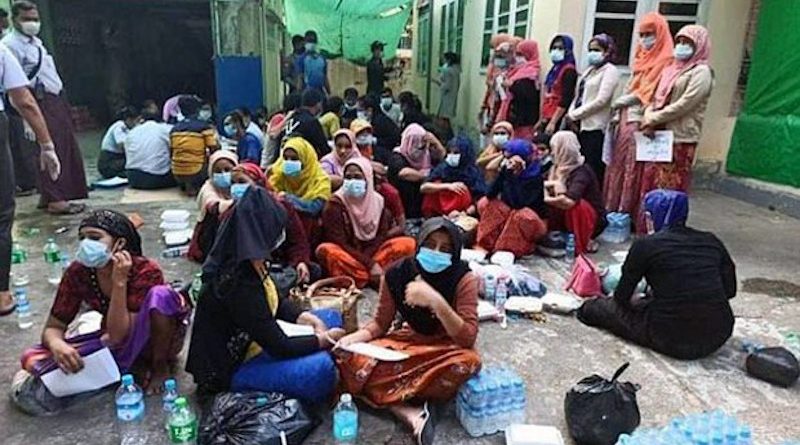 Rohingya Muslims sit on the ground during a police raid on two houses where they were staying while en route to Malaysia, in Shwepyitha township, Myanmar's Yangon region, Jan. 6, 2021. Photo courtesy of Yangon Region Police Force

Myanmar police arrested nearly 100 undocumented Rohingya Muslims from western Myanmar’s Rakhine state for illegal travel after raiding two houses in Yangon on Wednesday, saying that they had been trafficked and were heading to Malaysia.

Authorities, who discovered the group after following a suspicious man who could not speak Burmese to one of the houses in the country’s largest city, said Thursday that they charged four people with criminal persuasion and human trafficking.

The 26 Rohingya men and 73 women, including 10 children ranging in age from five to 10 years old, traveled from Rakhine’s Mrauk-U township to Yangon but denied being trafficked on their way to Malaysia.

Yangon regional government officials said the Rohingya are being detained at a coronavirus observation center at a university in the township, where they are being tested for COVID-19, and hat authorities are trying to verify their place of origin.

“We are immediately working on their immigration-related issues,” said Moe Moe Suu Kyi, minister of Yangon region’s Immigration and Human Resources Ministry. “The police will decide if they have violated the laws or not and whether they should be sent to court for trial.”

“We will test their COVID-19 status before they are returned,” she added. “If they are positive, we will keep them in the quarantine centers, [but] if they are negative, we will proceed with the repatriation process.”

Tin Maung Lwin, deputy police superintendant of Shwepyitha township, where the Rohingya were found, said two men and two women from Yangon have been charged with kidnapping and forced slavery for allegedly trafficking the members of the group. The charges carry 10-year and seven-year jail sentences, respectively.

“We have charged the human traffickers who were transporting these Muslims,” he said. “We arrested four of them. All of them are from the Yangon city area.”

The Rohingya are from Maungdaw, Buthidaung, Sittwe, and Kyauktaw townships in Rakhine state, and were traveling to Malaysia for work, Tin Maung Lwin told Agence France-Presse.

As a stateless minority group, the Rohingya have endured decades of discrimination in Myanmar where they are considered illegal immigrants from Bangladesh and denied citizenship along with access to basic services such as health, education, and jobs. They also must obtain permission to travel outside their immediate areas.

About 740,000 Rohingya were driven from their homes and into neighboring Bangladesh during a brutal military-led crackdown in northern Rakhine state that began in 2017 in response to attacks on police guard posts by a Muslim militant group.

Roughly 600,000 Rohingya remain in Rakhine state, with some still living in displacement camps set up following deadly communal violence between Buddhists and Muslims in Rakhine state in 2012. Over the years, thousands have paid traffickers to transport them to Thailand and Malaysia where they can find work.

A Muslim youth from Mrauk-U who declined to give his name for safety reasons told Radio Free Asia (RFA) that he also had been arrested by Myanmar authorities during a past attempt to leave the country for Malaysia with the help of agents. RFA is a sister entity of BenarNews.

The traffickers told him and others that they would take them to Malaysia for free, but later demanded payment of 1.4 million kyats (U.S. $1,044), he said.

“They took us to Magway region, [and] through the jungle,” he told RFA. “We didn’t know where we were going. Then, they disappeared and ran away. The police found [and] arrested us and gave us two-year prison sentences, though we stayed in prison only for a year because we received an amnesty. Then, we returned home.”

Another Muslim from Mrauk-U, who also declined to be identified for the same reason, said many Rohingya trying to migrate to other places due to a lack of job opportunities in Myanmar fall victim to traffickers who sometimes charge up to 3 million or 4 million kyats per person.

“Around 20 percent of the people travel to Malaysia, while the remaining 80 percent get arrested,” he said. “We want these agents and human traffickers to be arrested. They don’t help the local people and only make trouble for them.”

According to immigration statistics, Malaysia hosts as many as 150,000 of the estimated 1.8 million to 2 million Rohingya in the world, while 1.3 million reside in Bangladesh, 500,000 live in Pakistan, and 190,000 are in Saudi Arabia.