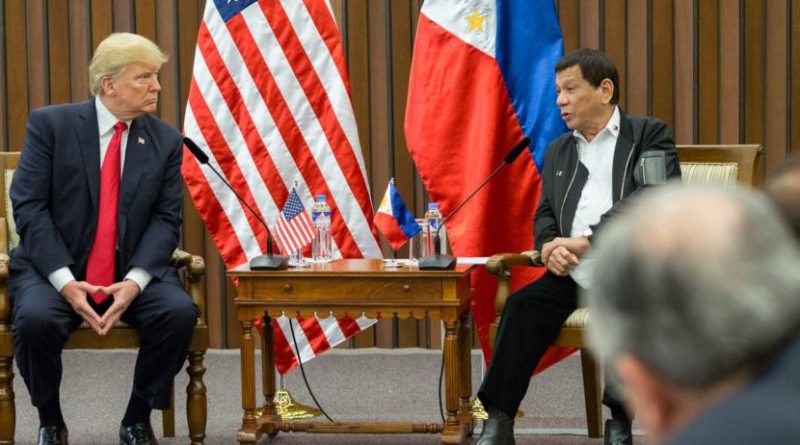 Philippines’ Defence Secretary, Delfin Lorenzana at a press briefing at Camp Aguinaldo in late December last year spoke of the need for a review of the 1951 Mutual Defence Treaty (MDT) with the United States given the growing security concerns in the South China Sea. The Defence Secretary had mentioned, given the ambivalent stand of the United States with respect to the Philippines’ claim in the West Philippine Sea (as referred to by the Philippines), “the government had three options after the review: Maintain it, strengthen it, or scrap it.” The main premise of the MDT is “that the Philippines and the U.S. would assist each other when either of them is attacked by a foreign force.”

The MDT between the Philippines and the US was signed on August 30 1951, in Washington, D.C. After the Philippines gained independence on July 4 1946, a strong American presence persisted. Under the 1947 Military Bases Agreement, a number of US military bases were set up in the Philippines. Most notable ones being the Clark Air Base and the Subic Bay (US naval station).  The bases were maintained and operated by the US until 1991 and 1992 respectively. Philippines has been the oldest treaty ally of the US in Southeast Asia. Besides the MDT, the two countries have signed other agreements as well like the Visiting Forces Agreement in 1998, The Enhanced Defence Cooperation in 2014. After the 1992 withdrawal of the US from Manila, the relationship between the two countries improved further in the economic, defence and the security realms. The major thrust of the security relationship rests on the 1951 MDT. Scholars have even branded the US as the Philippines’ ‘security umbrella’. In his September 2018 meeting with US Secretary of State, Michael Pompeo, Lorenzana had said, “Most in our defense establishments agree that the Philippines-US alliance remains robust based on an enduring history of close engagement and our unwavering commitment to work together on shared values.” Therefore, the current statement of Delfin Lorenzana in December last year “that this treaty was signed in the Cold War era, do we still have a Cold War today? Is it still relevant to our security? Maybe not anymore” comes as a surprise.

The main point of objection is the absence of an ‘instant retaliatory clause’ but to go through the constitutional processes, that is the need to consult the US Congress before taking any retaliatory action. Furthermore, Article 5 of the Treaty is, “an armed attack on either of the Parties is deemed to include an armed attack on the metropolitan territory of either of the Parties, or on the Island territories under its jurisdiction in the Pacific Ocean, its armed forces, public vessels or aircraft in the Pacific.” This clause has again triggered a lot of debate in Manila as to “what “Pacific” refers to. Does it mean the Pacific Ocean or the Pacific area of operations which encompasses everything west of the US West Coast up to the Indian Ocean?”

Philippines is currently facing its biggest external threat in the form of an expansionist China in the South China Sea according to Filipino analysts like Richard Heydarian. The Permanent Court of Arbitration in the Hague had awarded the Philippines sovereign rights and defined its maritime entitlements over three disputed areas in the Spratlys: Panganiban (Mischief) Reef, Ayungin (Second Thomas) Shoal and Recto (Reed) Bank. Panatag (Scarborough) Shoal off Zambales was declared as a common fishing ground over which no country has control. But China had completely ignored the ruling and built fortified artificial islands in the South China Sea including in the Panganiban Reef. The Chinese sealed off Panatag and harassed resupply operations to Filipino troops on Ayungin. The Foreign Affairs Secretary Teodoro Locsin has said in a statement recently that the Philippines will protest against the Chinese opening a maritime rescue centre in the Fiery Cross Reef. The territorial dispute is listed by the Armed Forces of the Philippines (AFP) as the primary source of the country’s external threat.

This has prompted Manila to demand that the US takes a stronger stand in the South China Sea issue in favor of its erstwhile treaty ally. Though the US is undertaking Freedom of Navigation and overflight exercises in the South China Sea, it still remains non-committal on whether it will defend the Philippines in times of an armed attack. The US had in the past taken no stand during the takeover by the Chinese of the Philippines’ claimed Mischief Reef in 1995 and also during the 2012 Scarborough Shoal standoff between the Philippines and China. This has not gone down well in the Filipino defence, security circles and most importantly the country’s citizens.

However in an address on the eve of Chinese New Year, the leader of the Philippines said the “friendship and cooperation forged between the Philippines and China” had led to “greater prosperity and economic growth”. Philippines unlike in the past where it was too pro- US, is now like most other countries in the region following a hedging strategy, which means the US needs to do much more to keep the trust of its treaty ally intact. Under the Trump administration, US’s Asia Policy has become a dicey one. On one hand, we saw President Trump pulling out of the Trans-Pacific Partnership, but on December 31 2018, the release of the Asia Reassurance Initiative Act (ARIA) is focused on the promotion of American interests in the Indo-Pacific region in terms of defense and security partnerships. In the ARIA, the US “promotes a joint Indo-Pacific diplomatic strategy in Asian waters through joint maritime exercises in the East China Sea and the South China Sea.” It also reaffirms its treaty commitments to countries like the Thailand and the Philippines. Though the ARIA mentions about the appropriation of US$150,000,000 to the Indo-Pacific region for each fiscal year from 2019-2023. But at the same time, financial assistance will be subjected to a budget cut in countries such as Cambodia, Myanmar and US’s closest security ally in ASEAN, the Philippines, due to human rights issues. According to academics, Academics Gregory Poling and Eric Sayers, “if the Philippines withdraws from the MDT it would be a severe blow to US interests in the Indo-Pacific.”

This in a way is reflective of the yearning of smaller countries in this region for a more proactive role to be played that caters to their interests by the Big powers like the US. This yearning presents both challenges and opportunities for the Big Powers. Even countries like the US in the current times despite the ongoing trade war with China is delicately balancing its relations with Beijing.  So to claim outright that it will take the side of its treaty ally during a clash with its very crucial trading partner puts the US in a tough spot. The Scarborough Shoal 2012 standoff had also put the Asia Pivot policy of the Obama administration under test and many had questioned the genuineness of the policy when the US maintained a neutral stand in the standoff. Philippines’ wish for a stronger MDT has again put the US in a difficult situation. The US-Philippines 2014 Enhanced Defence Co-operation Agreement (EDCA) also depends on the MDT. That agreement allows the US to construct facilities and pre-position and store defence equipment, supplies and material within Philippine military bases and to deploy troops on a rotational basis there. Given the Philippines’ change in attitude towards China and its new hedging strategy, according to Poling and Sayers, “continuance of the treaty and the EDCA is critical to US interests in the region, not necessarily to those of the Philippines whose relations with China may suffer.”