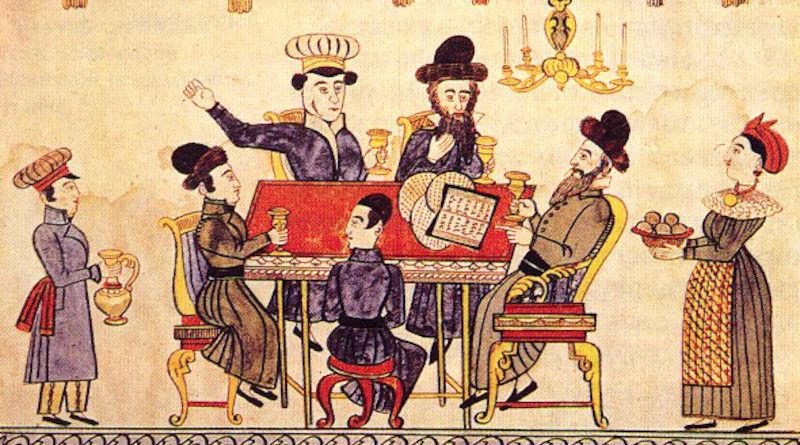 Passover this year lasts from sundown on Wednesday, April 8, until sundown on Thursday, April 16. On the Jewish calendar, Passover (or “Pesach” in Hebrew) is always celebrated between the 15th and 22nd day of the month of Nissan. What is this Jewish holy day, and how is it celebrated?

What does Passover commemorate?

The feast of Passover commemorates the liberation of Israel from slavery in Egypt during the Exodus. When Pharaoh resisted the divine commandment to “let my people go,” the Lord visited 10 increasingly deadly plagues on the Egyptians: rivers turned into blood, frogs, lice, flies, killing livestock, boils, hail, locusts, and three days of darkness. His final plague claimed the life of every firstborn male in Egypt; to be spared, Israelites had to kill a spotless lamb and put the blood of the lamb on the door post, as a sign that the plague would pass over the home. The Passover, which is recorded in Exodus 12, is traditionally dated to 2448 on the Jewish calendar (1312 or 1313 B.C.)

The modern Passover is a celebration of the Jewish people going from slavery to freedom. It is a feast of liberty.

What are the chief aspects of the Passover holiday?

Before Passover, Jewish people eliminate all leavened food from their homes. The first two and last two days of the feast (outside Israel) are full holidays (yom tov) on which observant Jews do not work. Most work is permitted on the days in the middle (Chol HaMoed). A Passover seder following a service book called the Haggadah (“telling”) is held the first two evenings to describe the miracle of Exodus.

How do families prepare for Passover?

Before Passover, Jewish families eliminate all foods containing leaven (chametz) from their homes, in imitation of the Israelites who had to flee in haste (Ex. 12:34). Families hunt for chametz the night before (or on Thursday night, if Passover begins on the Sabbath). Observant Jews may also “sell” leavened items to Gentiles—more of a short-term, rabbinically brokered rental in which leavened items are locked away, and Gentiles care for them until Passover concludes. Leftover leaven may be burned the day before Passover begins (Sray’fat Chametz). Ashkenazi Jews also eliminate legumes, or kitniyot.

Is there a fast associated with Passover?

There is a minor fast, from sunrise to sunset, for firstborn male children. The Fast of the Firstborn (ta’anit bekhorim) comes the day before Passover (14 Nissan), unless this falls on a Sabbath, in which case it is observed one day earlier. If the child is too young to fast, his father fasts in his place; if the father is also a firstborn male who must fast for himself, the child’s mother fasts. Rabbis will often complete study of a portion of Torah on the morning of the fast in order to hold a joyous meal (siyyum), which Jewish law allows firstborn males to eat.

How do Jewish families celebrate Passover?

Jewish families hold a Passover seder the first two days of the feast, or only the first in Israel. This will include a meal, blessings for multiple items including four cups of wine, eating unleavened matzah, and inviting the dawn of the Messianic age, all while recounting the miracle of Jewish liberation from Egyptian bondage.

What items appear on a Passover seder plate?

Each seder will include a plate that contains six items:

What are the 15 parts of a Passover seder?

These 15 steps are sometimes set as a poem as a mnemonic device:

What other prayer customs take place during Passover?

Observant Jews pray the full Hallel Psalms on the first day, and a partial Hallel (omitting portions of Psalms 115 and 116) the rest of the days of the feast. The synagogue has special readings commemorating Exodus miracles and other acts of deliverance. On the final day, the synagogue holds a memorial service for the departed (yizkor).

Is Passover tied to any other Jewish holy days?

The Passover begins a 50-day countdown to the Jewish holy day of Shavuot, or Pentecost.

Why is there a difference between Jewish practice inside and outside Israel?

Diaspora Jews who lived more than a reasonable journey from Jerusalem could not count on a messenger to announce the appearance of a new moon in a timely fashion, so they began celebrating two days out of caution.

What is the proper greeting for Passover?

One may wish someone a “chag sameach” (happy holiday) on any joyful holy day. The expression “gut yontiff” (“good yom tov”) is sometimes used by Yiddish-speaking Jews on major feast days. Sephardic Jews wish one another “Moadim l’simcha” on the intermediary days of Passover and Sukkot.

Is Passover mentioned in the New Testament?

The four Gospels agree that Jesus celebrated Passover with the disciples, and that the crucifixion took place at or near the time of the feast (St. Matthew 26:19; St. Mark 14:16; St. Luke 22:15; St. John 19:14). The Apostle Paul also used Passover’s elimination of leaven as a symbol of purging out unrepented sin through the process of sanctification, since “Christ our Passover was sacrificed for us” (I Corinthians 5:6-8).

Home » FAQ: What Is The Jewish Holiday Of Passover?