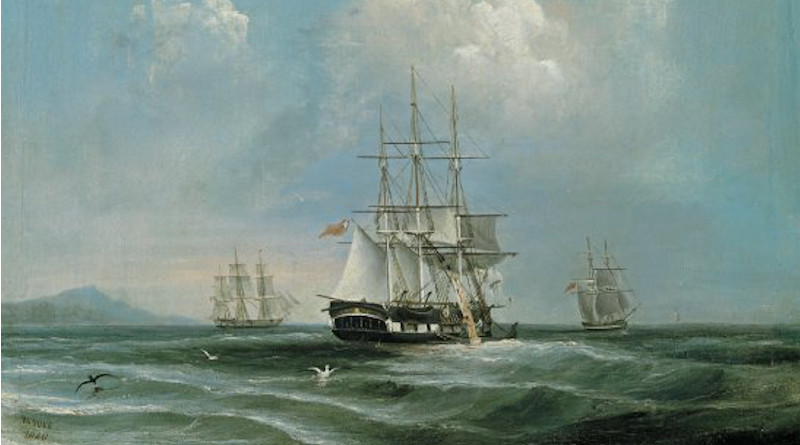 Australians have long delighted in the increasing annual whale migration from the Southern Ocean up along the country’s eastern seaboard, a spectacle that can be readily viewed from the shoreline or up close from runabouts and other small vessels. This has not only given rise to an affinity with the whales – some of which are individually recognisable – but to a strong sense of protectiveness. But this has long stood in stark contrast to Japan’s annual whaling activities in the Southern Ocean, classified as “scientific” though in actual fact commercial, which have attracted strong criticism from Australia.

The last southern summer, however, passed without any such Japanese mission, the first time since Japan withdrew from the International Whaling Commission (IWC) and moved its focus to explicit commercial whaling within its own exclusive economic zone.

Interestingly, most Australians are blissfully unaware of the role that whaling played in their country’s economic development. In the 18th and 19th centuries, when whale oil was roughly the equivalent of petroleum today, the plentiful supply of whales in Australian waters were seen as a major asset.

Few Sydneysiders, for example, would ever have heard of Bourn Russell. He was the resourceful and far-sighted captain of the Sydney whaler, Lady Rowena. British and other whaling vessels had been fishing in the Japan Sea since 1820. Sailing along the coast of Japan in 1831, Russell made an interesting entry in his log book. He noted that Japan seemed to have no wool, and surmised that it would undoubtedly make a good market for that booming Australian commodity. How right he was.

Japanese trade was foremost in his mind. He had earlier burnt down a village on the south coast of Hokkaido, Japan’s northern island and a place garrisoned by Japanese, because of the latter’s refusal to supply him with things he required for his ship. Later, he dispatched a letter to “His Most Celestial Highness, the Emperor of Japan”, demanding, quite rudely, that hospitality be extended to vessels such as his. He even suggested that the Japanese might find trade with foreigners beneficial. Despite the fact that Japan was still closed to outsiders, Russell knew what he was talking about. He had already traded directly with Japanese on inhabited islands close to the coast, and also done a brisk trade with Japanese junks within sight of the mainland of Honshū. On one occasion, fifty Japanese vessels came alongside the Lady Rowena and provided the Australians with essential supplies. Russell himself bought from the Japanese two English-language books, one on trigonometry and geometry and the other on natural history. He paid in red flannel shirts, of the type that later became popular on the Australian gold fields, as well as in Spanish dollars.

Even with Russell’s keen eye for future trends, he could never have imagined that early in the 21st century, his fellow Australians would have all but forgotten the importance of the whaling industry that had taken him and his men to the distant and lucrative “Japan grounds”. Indeed, by the late 1830s, Sydney was so prominent on the global whaling map and so frequented by American whalers that the United States government had to post a Consul there to attend to the needs of US nationals. It was Australia’s first diplomatic engagement.

A few years later, Hobart, as the biggest whaling port in the Southern Hemisphere, also had a US Consul. An American whaling captain who often visited at the time, later wrote in his published memoirs that on the first occasion he went ashore there, he came across a young American who had been resident in the city for several years. “I asked him his opinion of Hobartown,” the captain wrote, “and shall never forget his answer. It was that, ‘lewdness filled the streets, licentiousness the houses, and profanity the air.’ Although not prepared to endorse his sentiments in toto, I must confess that he was not very wide of the mark.”

On one day in 1848, Hobart could claim twenty-nine local whalers and twenty-six foreign whalers in port. For a few years thereafter, a dozen Tasmanian whaling vessels were annually working the Bering Sea, north of the Aleutian Islands. The whale oil they brought back was trans-shipped to London. One Hobart whaler, the Eamont, was wrecked on the coast of Japan in 1850. Its crew was transported by the Japanese, by both land and sea – being wrecked yet again along the way – to Nagasaki for repatriation aboard a Dutch ship bound for Batavia, present-day Jakarta. The Tasmanian captain’s account of this experience, in the Hobart Town Courier of 15 March 1851 makes for exciting reading.

The Tasmanian vessels often “spoke” to each other while whaling, and during one such “gam” in the middle of the Bering Sea in June 1851, one Hobart vessel made a handsome profit by selling a large quantity of Tasmanian potatoes, brought along for the purpose, to its compatriots.

Why had the whaling industry taken Australian vessels so far from home?

During the Industrial Revolution, whale oil – used for lighting and lubrication – was a vital commodity. Whalebone, which was actually the baleen, or long sifting jaw blades with which one variety of whales filtered the mass of shrimp-like crustaceans they consumed, was a valuable bi-product. In the era before high-tensile steel and plastics, its uses extended far beyond the commonly known one of stiffening women’s corsets.

Though European whaling had a history of a thousand years, it was the expansion of the American whaling industry in the mid-18th century that turned it into a global activity. This was mainly due to the ingenuity of the settlers on the island of Nantucket, off the New England coast. What they were after was the sperm – or spermaceti – whale, a toothed mammoth whose oil contained a white waxy substance. The same material was also found in large quantities in the upper casing of its head, a part of its body that accounted for more than half of its overall length. Candles made from this substance burned brilliantly and were relatively free of smoke and odour. So outstanding was their quality that they were adopted as the standard measure for artificial light, otherwise known as candle-power.

Any study of America’s emergence as the world’s greatest whaling nation also reveals another fascinating story: the economic history of the British Empire and its tendency to penalise entrepreneurial colonists. The role of the Boston Tea Party in triggering the American War of Independence is well known. British greed and interference in the whaling industry was equally as significant. Once British whalemen felt American competition intensifying, de facto discrimination was succeeded by de jure. In 1766, a duty was placed on whalebone and oil imported into Britain, including from the colonies, and, as British producers continued to be paid a bounty from which the colonials were excluded, the American’s were doubly disadvantaged. In the eyes of the whalers, the British duty ranked alongside the Stamp Act and the Tea Act. Their indignation was, however, tinged with apprehension, for in the event of a rupture with Britain no American industry was more vulnerable than whaling. Rather than British frigates protecting the American colonial whalers from pirates and French privateers, they would instead be tracking the New Englanders down. Furthermore, the vital London market would be completely closed to them.

British restrictions, however, did provide a powerful incentive for the Americans to seek more profitable grounds. They drove south in the Atlantic and, eventually into the Pacific. When the War broke out, the British took the New Englanders’ vessels as prizes. Their entire crews, both officers and men, could be impressed under Britain’s Restraining Act, either into the Royal Navy or into the British whalers. The absence of the Americans from the southern fishery gave the British a chance to establish themselves. Their success did not escape the attention of Benjamin Franklin and John Adams, then American Commissioners at the French court. Recognising an opportunity to strike a blow at British commerce, they urged the French in 1778 to destroy the British whale fleet and liberate the impressed New England crewmen. Later, the question of American access to British fisheries was a major difficulty in the negotiations that led to peace.

Once sperm whales were discovered in the Pacific, competition with the Americans was rekindled. British whalers pressured their government to force the powerful East India Company to further relax its hold over the shipment of whale products, especially in light of the fact that the new settlement in New South Wales offered a strategic base for them. It was for this reason that when the convict transports of the Third Fleet sailed into Sydney in 1791 (the First Fleet was in 1788), there were five whalers among their number. By the early 19th century, whaling was highly profitable in New Zealand waters and in the Tasman Sea. The Tasmanian colonists, who were short on capital but long on initiative, established a bay whaling industry that replaced sealing as the prime source of Australia’s export revenue until it in turn exhausted the resource it exploited. The Tasmanians were then forced into offshore whaling, at which they also succeeded.

By the mid-1830s, one third and more of the sperm oil imported into Britain was of Australian origin. In the five years to 1833, colonial production had risen tenfold. Wool production had only doubled between 1828 and 1833, but was to treble in the next five years. In 1834, the value of the export wool clip exceeded that of sperm oil for the first time since the oil rush had started and it never looked back. The Australians had found their staple. They would create their greatest wealth on the great plains. Not that they abandoned whaling. It remained profitable and continued to appeal to some quality in the emerging Australian character.

Globally, the industry peaked in the 1840s and 1850s. The American fleet reached an all-time high of 722 vessels in 1846, about half of them sperm whalers. That was a time when the rest of the world could muster perhaps 230. By the time of the American Civil War in the early 1860s, which created yet another major disruption, whaling was already in decline. The struggle for whaling supremacy was over and the Yankees had won. The British had been forced from the field and their colonies had seen better days. It was a decline from which the industry would never recover.

Ironically, it took the US and Allied Occupation of Japan, in which Australia participated, after the end of the Pacific War in 1945 to persuade Japan to get back into whaling. It was believed to be the best way to put protein into the diet of a malnourished population, especially into the lunch-boxes of school children.

*Tasmanian-born Warren Reed was an intelligence officer with the Australian Secret Intelligence Service (ASIS). Trained by MI6 in London, he served in Asia and the Middle East. Later, he was Chief Operating Officer of the Committee for Economic Development of Australia (CEDA).