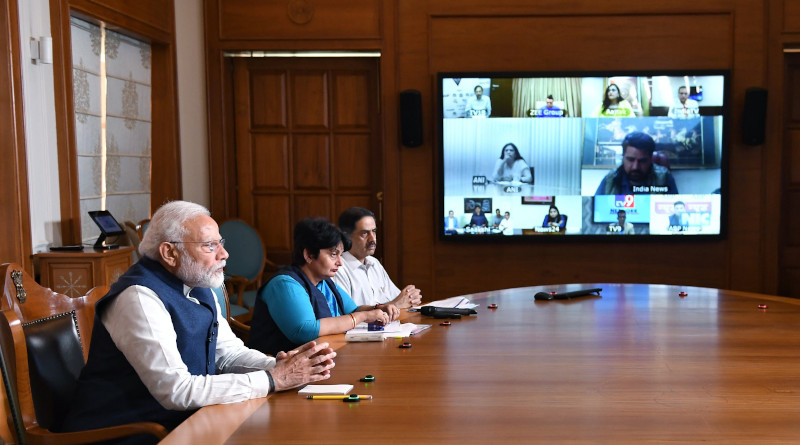 On April 16 two Hindu ascetics and their driver were lynched to death near Gadchinchle village in Maharashtra’s Palghar district in India. As it always happens these days with Hindutvadi fascists running India, the blame for their deaths was put squarely upon the Muslims. Nothing should surprise us in a country that has become the den of hatred and intolerance of Muslims.

On April 23, the NPR reported the sad saga of Muslims in Modi’s India. “Cowering in the grass, a young Muslim man begs for his life. He’s shaking. His hands and face are bloody. His attackers beat him and threaten to douse him with fuel and set him on fire. They accuse him of intentionally trying to spread the coronavirus.”

The man, identified later by authorities and neighbors as 22-year-old Mehboob Ali, was on his way home from a Tablighi conference in central India when he came under attack April 5 in his village of Harewali, on the northwest edge of India’s capital. Ali managed to escape and was treated at a local hospital. The assault, video of which has been shared widely in India on social media, is part of a wave of violence against Indian Muslims in recent weeks.

“Muslims became the sole culprits responsible for the spread of the coronavirus in India,” writes investigative journalist Rana Ayyub in the Washington Post. One BJP minister called it a “Talibani crime.”

But it isn’t just Hindu nationalist politicians or mobs. The country’s print and social media have joined in the chorus, too. The newspaper The Hindu published a cartoon showing the world being held hostage by the coronavirus — with the virus itself depicted wearing clothing associated with Muslims. The 24-hour news channel India Today ran an undercover investigation into so-called madrasa hot spots where the virus is allegedly being spread, and also posted a graphic on the number of Tablighi Jamaat-linked cases over an image of a Muslim prayer cap.

The Guardian reports, “Muslims have now seen their businesses across India boycotted, volunteers distributing rations called ‘coronavirus terrorists’, and others accused of spitting in food and infecting water supplies with the virus. Posters have appeared barring Muslims from entering certain neighbourhoods in states as far apart as Delhi, Karnataka, Telangana and Madhya Pradesh.” There have also been reports of Indian Muslims trying to provide food and money to the needy people being attacked, beaten, and lynched by Hindu mob.

So what really happened in Gadchinchle village? Some background information on the district will help.

Forty per cent of Palghar’s population is Adivasi who are dirt poor. In some parts of the district, nearly 90 per cent live below the poverty line. Most Adivasis work as daily wagers or as contract labors on construction sites, fishing boats and trawlers, and in brick kilns. They usually own less than an acre of land on which they grow rice during the monsoon season. For the rest of the year, their fields are parched, despite the existence of several big and small dams in the district — Dhamni, Tansa, Susari — which were all built on tribal land, but the water is diverted to meet the drinking and industrial needs of Mumbai. Hundreds of people have died in recent years because of malnutrition. In recent weeks dozens of Adivasis have been hit with the Corona virus, some even died of the pandemic.

According to Raju Pandhara, Dahanu-based activist of the Adivasi Ekta Parishad, a grassroots organization working in western India, from early April, as the Covid-19 cases began to spike across the country, two sets of highly-disturbing WhatsApp messages and Facebook posts were widely shared in the tribal clusters of Dahanu taluka of Palghar district and in the Union territory of Dadra and Nagar Haveli in north western Maharashtra, 140 kilometres from Mumbai. The first set of messages was communally charged and alleged that members of the minority Muslim community infected with the virus had been instructed to sneak into Hindu neighbourhoods, posing as sadhus, or even doctors and policemen, and spread the disease by poisoning local water bodies or by some other means; the second claimed that organ harvesting gangs, child lifters and thieves, also in disguise, were stalking remote tribal villages.

According to Pandhara, the men of Gadchinchle and its adjoining villages, located in a remote part of Dahanu, were already on the edge: the Covid-19 lockdown had forced them to stay at home with no work, little money and dwindling rations — now, consumed with fear, they hit the panic button fast and furious. Roadblocks were put up outside the smallest hamlet, dozens of vigilante groups sprung up; armed with sticks and axes they stood guard over deserted forest roads using torch lights and whistle signals to communicate with each other.

“When a lone car was spotted driving past Gadchinchle not once, but twice that night, the people concluded that the travelers were the same criminals [i.e., Muslims] about whom they had been warned on WhatsApp. Believing their lives were in danger, the villagers, many of whom were under the influence of liquor, beat the [Hindu] sadhus and their driver to death. They were joined by people from Dadra and Nagar Haveli which is barely 500 meters from the murder spot,” a forest department official from Palghar told ThePrint.

Thanks to the social media, rumor spread that since the victims were Hindus, their attackers must be Muslims. However, a list of 109 people arrested in connection with the incident so far, put out by the state government, reveals that not a single person on it belongs to the minority community. As per the 2011 Census, Gadchinchle has a population of 1,208 residents, of which 93 per cent belong to the Warli and Konkana tribes. It has no Muslim families.

When the ‘Muslim hand’ theory backfired, on 20 April Organiser magazine, brought out by the RSS (the mother organization of Hindutvadi fascism), questioned the role of Christian missionaries and converts in the crime: “The area where the lynching happened is a hotbed of Christian missionary activity who are accused of poisoning the tribal in the area to further their agenda. Lot of religious conversions have happened over the years in this area abetted by the Christian missionaries.…”

However, according to Dr Sunil Paradha, a doctor who worked in the primary health care center in the locality, says that there are barely two to three Christian families in the Divshi-Gadchinchle group panchayat, the rest are all Hindu Adivasis, a few still worship their tribal Gods. “The influence of religious sects and gurus like the Sant Nirankari Mission, Mahanubhav Panth, and Narendra Maharaj over the Adivasi population in the region has only helped the Vanvasi Kalyan Ashram, set up by the RSS in the district, to blunt the reach of Christian missionaries and widen the base of the BJP in the last decade.”

Christian Adivasis were neither the instigators nor part of the lynching mob of 2,000 strong while there are only a handful of Christian converts in that area.

Interestingly, lynching of outsiders is not uncommon in Adivasi territories because of the poisonous effect of hatred via the social media. Not too long ago, a medical doctor and a Railway official were both victims of lynching attempt; they were suspected of belonging to the Muslim community – as spreaders of the ‘Corona Jihad’. But the local police did nothing to allay the fear and suspicion of the Adivasis.

Now that both the theories of ‘Corona Jihad’ and ‘Christian missionaries’ seem doomed, the Hindutvadi ruling party BJP has shifted the blame to the CMP – the Communist Party (Marxist).

The local BJP leader who lost his seat to CMP MLA insists that the lynching is part of a “larger political conspiracy.” Taking a cue from the Organiser report, which attempts to pin the act of violence on the CPM and its local MLA, he said, “It is now suspected that the mob was instigated by CPM leaders and the entire incident was a pre-planned conspiracy…. All the 110 people who have been arrested are workers of the CPM and those who are absconding too are workers of the CPM… It is now being alleged that the local CPM MLA comrade Vinod Nikole is behind this incident.”

Meanwhile, the Congress claimed that the two people taken into custody in connection with the lynching were members of the BJP’s village booth committee.

“The Left has nothing to do with this gruesome crime, it happened in the BJPs backyard, but some vested interests are using the episode to demonize the CPM and target social activists and grassroots organizations who have been fronting the fight against multiple high-tech infrastructure projects in Palghar district and in particular Dahanu,” alleges Nikole.

When the pandemic is used as a vehicle to sell hatred, it is not surprising that it will bite the very hands that feed it. So, the death of the Hindu Sandhus was a natural outcome in Modi’s Hindutvadi India. It’s the politics of hatred and intolerance that killed them.