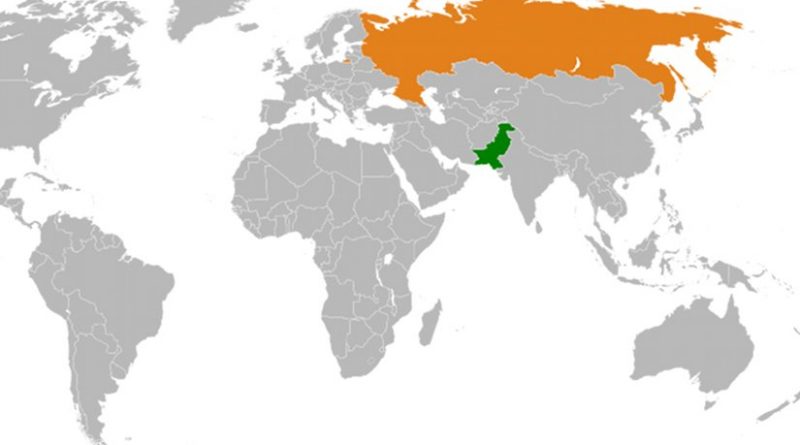 New equations of the world order are being drawn and global orientations have been changing. It is time for Pakistan to step-up its diplomatic ties to extract the maximum for itself. In the past few years, growing alliance between Kremlin and Islamabad is getting a lot of limelight. Irritant for Pakistan’s enmities, this alliance grew from military to socio-economic segments.

Diplomatic and bilateral relations between Pakistan and the Russian Federation were first developed on May 1st, 1948. History has seen that the relationship between Pakistan and the Soviet Union and then with Russia is marked by many ups and downs. In the past, there were numerous disturbing issues that even divided both countries for some time, preventing them from managing to have amiable relations based on mutual interests and benefits. But, a true diplomatic relationship is always preferred because of geographical proximity, historical linkages and common developmental interests in Asia.

In last few years, Moscow has emerged as a major stakeholder in the South Asian politics. Sometimes, it has even deescalated the tensions between the two nuke-loaded countries proving its intentions towards peace in the region. During the recent tensions between India and Pakistan that brought both the countries to the brink of war, Moscow offered to be a mediator. This offer was warmly welcomed by Pakistan.

Such vicinity between Moscow and Islamabad is creating a nuisance for countries like USA and India. It all started from military cooperation. Both the countries also held a joint military exercise from October 21, to November 4, 2018. The drill was called Friendship 2018. It was third in a row of annually held Friendship exercise. Prior to this, two drills, in 2016 and 2017 were held in Cherat in Khyber Pakhtunkha, and Russia’s North Caucasas Republic of Karachayevo-Cherkessia respectively.

Besides skills exchange, arms trade is also happening between the two. Indeed, it is a great deal for Pakistan that Russia has lifted its arms embargo on Pakistan and started armed trade. Now this military cooperation is diversifying to other areas of cooperation leading to the strengthening of strategic understanding between Islamabad and Moscow.

Russian deputy foreign minister had openly expressed in 2018 that Moscow has been having arms dealing with the Islamabad. He also said that Pakistan is also a victim of terrorism. It solidified Pakistan’s stance. Even Russian foreign minister have said that their country will provide every possible support to Pakistan in order to make it a developed country.

Both the countries have adopted a proactive approach regarding economic co-operation specifically in energy sector. Pakistan’s offer to Russia in order to become a part of CPEC and Kremlin’s consideration of the proposal, potential to participate and invest in the venture between Islamabad and Beijing.

Mr Putin had expressed his support for Pakistan’s membership of the Shanghai Cooperation Organization. Following to which there have been meetings between Pakistani dignitaries and Russian counterparts on the sidelines of SCO summit in UFA in July 2015

It is a well-known fact that Russia is a major stakeholder in Afghan conflict. Pakistan, the immediate neighbor of Afghanistan also has vested interests in Afghanistan. Both countries have had played major role in bringing Taliban’s on the table and together they can put an end to the Afghan misery with effective measures.

It is obvious that Washington played a major part in the new romance between Moscow and Islamabad. The deceitful polices and animosity of Oval brought both Russia and Pakistan closer to each other. Both, Russia and Pakistan have a strong desire to reduce U.S. influence in South Asia as it has done nothing for bringing peace in the region rather causing more violence by fragmenting it more.

For years, U.S. has been influencing Pakistan’s internal affairs but now it’s high time for Pakistan to realize that Uncle Sam has nothing in his bag but dollar bills. In order to sustain and survive one cannot solely rely on the monetary support.

The new friends share same approach towards the stability in South Asia. Results will be much more positive and nurturing if both enhance cooperation with each other. However, that can only happen if irritants like India and U.S. rivalry is countered properly.

In order to further strengthen ties, Pakistan and Russia still needs to fill in the gaps and draw up designs to institutionalize their ties more. For instance, joint working group on counter-terrorism, strategic stability, and an inter-governmental joint commission, should be revived and enhanced.