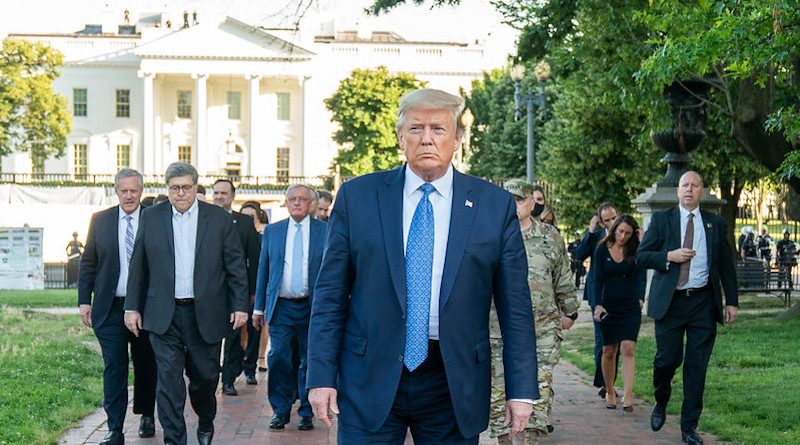 President Donald J. Trump walks from the White House Monday evening, June 1, 2020, to St. John’s Episcopal Church, known as the church of Presidents’s, that was damaged by fire during demonstrations in nearby LaFayette Square Sunday evening. (Official White House Photo by Shealah Craighead)

Since decades, the United States has been sponsoring dozens of so-called “Regime Change” revolts around the world. Regime Change has been an active part of US foreign policy by setting and implementing its agenda across the globe with sole objectives for pursuit of US vested interests in the subsequent regimes, continents across the globe.

The exploitation of these revolts by igniting them into fire and fury, flashing out these riots in global media, and to show United States (US) as the biggest sympathizer of these protesters has been an integral part of the aggressive diplomacy for the past several decades. In almost all these movements across the globe, US was depicted as the biggest champion of human rights and democracy in the world taking pains for millions of people on account of subsequent rights.

To topple down the governments, the US launched series of movements in different parts of the world because it is always easy to rule and to get a hold on the resources of countries by wrecking their economies through these bloody protests, springs, and winters.

These protests have always been attributed with names of very colorful and attractive revolutions so that deprived communities could be highly exploited for the accomplishments of US vested interests.

Today these colors of upsurges are sprinkling across the US streets as US citizens have come to roads against the worst inhuman conduct of US law enforcement agencies towards racial discriminations.

The world is watching as the US President threatens many countries, but those torchbearers of human rights, democracy, and champions of freedom of expression have closed their eyes.

Nevertheless, the US has different and opposite views on these colorful protests being witnessed now in the various cities across the US. However, the world is watching more closely the protesters have been called looters, thugs, thieves, and much more but surprisingly these protesters would be called democracy heroes and activists in the other part of the world in such kinds of demonstrations.

The mob politics and the fire flashing out in the United States nowadays but no one is trying to understand this outburst of the epidemic of racism in America, rooted back centuries.

The menace of racism is not new in the United States it owns a long history since the creation of the United States of America (USA) by neglecting and grabbing the rights of the Native Americans who were pushed behind the wall forever. This reality hinted at the fact that very foundations of US based on exploitation and persecution of ‘Red Indians’, native inhabitants of America.

This hundreds of year’s frustration, deprivation, and anxiety have now turned into the massive eruption of lava cratering out from the so-called American double standards, values, and hypocrisy.

The white supremacy has badly haunted the Americans and there is no more space for the others. Since Donald Trump took the office, the US has shut down its doors for the nationals of other countries. The US has been isolating itself from the global arena; it gives a gesture that the US is no more a proactive player to be on the top among the other emerging global contemporaries racing towards internationalism.

After 9/11, the US has changed the dynamics of the entire world. Especially in the episode of Arab Spring how the US has destroyed the whole Middle East and manipulates its regime change doctrine through a hypocritical ‘Foreign Policy’.

With an excuse of Weapons of Mass Destruction WMD, the US destroyed and invaded Iraq just for the resources of oil in the region. After the Iraq war, ISIS and ISIL get control of a big part of the Middle East and they have destroyed the thousands of years old Muslim history, culture by wiping out from the earth.

Therefore, the Arab Spring has changed the face of Arab countries by pushing them towards the Stone Age. The fate of the citizens of Arab nations turned even worst and an unending humanitarian crisis engulfed Europe.

Donald Trump has a team of advisors who are experts in making every complex situation even more complicated to make a huge mess. The way Donald Trump mishandled the whole situation after the murder of George Floyd, he does not need any political rivals while having such kinds of advisors in the White House.

When Rome was burning, Nero was playing the flute, imagine if Nero was alive in today’s world, what he would have to do? Maybe he was tweeting on twitter?

When US President says that the US is pulling out from international agreements and cannot afford to pay, it is mean he is accepting that America is no more capable to be a key player in international politics.

Watching America massively on the street, Domagoj Nikolic vividly remarked: “Is the Libya-sation of the States and Gaddafi-zation of Trump the next to come?

Indeed, the United States has been losing its hegemony due to its double standards and the emerging multipolar world. The US monopoly towards setting up an international world order badly failed due to Washington’s invasion and regime change policies.

Subsequently, with an international tarnished image and damages while engaging the US into international conflicts, now the US has turned back with the same aggressive approach towards its people.

The existing governance system, institutions, policing in the United States need an overhauling due to the excessive control of white Supremacists, otherwise, this fire and fury summer revolt will lead towards mob politics, anarchy, and days back to 1960s.

*Malik Ayub Sumbal is a Geopolitical Analyst, Commentator, and Award-Winning journalist. He tweets at @ayubsumbal