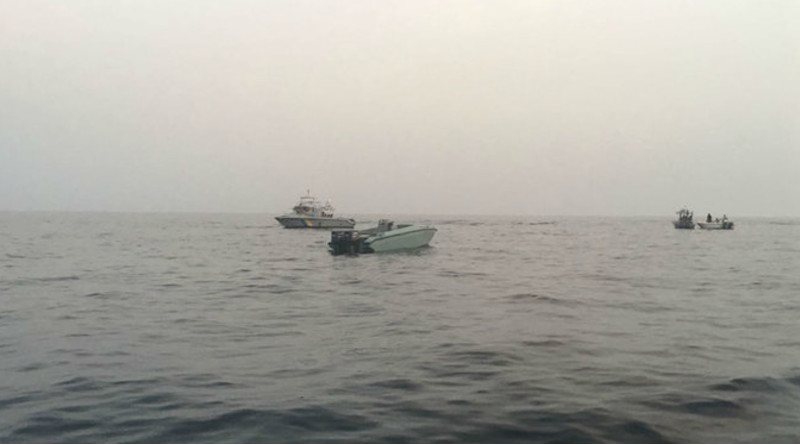 Houthis have used boats rigged with explosives in the past. (File/Arab Coalition)

Two boats filled with explosives were destroyed near Hodeidah’s Salif port, the Saudi-led coalition said on Thursday, highlighting the Houthi rebels’ continued threat to international shipping in the Red Sea.

Yemeni political analysts and military leaders warn that the Houthi threat will persist while the Iran-backed militants control strategic locations on the Red Sea, including the major port city of Hodeidah.

Baha Khalefa, a Yemeni government officer who took part in a UN-led committee that oversaw a truce in Hodeidah, told Arab News that army troops received information that two boats assembled and laden with explosives at Salif port were poised to hit targets in the Red Sea.

“The Houthis used the port to prepare the explosive-laden boats since, along with Ras Isa, it is one of the two closest points to international waters in the Red Sea,” Khalefa said.

Government troops halted their offensive as they battled Houthis on the eastern outskirts of Hodeidah after the internationally recognized government and the rebels signed the Stockholm Agreement in late 2018.

The foiled attacks in Hodeida have again focused attention on the debate surrounding the ending of the offensive.

“Houthis will continue to pose a threat to Yemen and international navigation as along as they control Hodeidah,” Khalefa said.

Liberating the city would lead to Houthi financial sources and military supplies drying up, Khalefa claimed.

“They will crumble everywhere if they lose Hodeidah.”

Yemeni analysts agree that the Houthi’s military capability in the province poses a threat to Red Sea shipping.

The militants are no longer a risk in the Arabian Sea or Bab Al-Mandab after government forces expelled fighters from Yemen’s southern and western provinces, analysts say.

“The targeted boats confirm again that the Red Sea and the Bab Al-Mandab will remain insecure and a hotbed of tension if Houthi military forces remain in Hodeidah province,” Saleh Al-Baydani, a Yemeni political analyst, told Arab News.

He said that the Stockholm Agreement has largely failed to bring peace to Hodeidah.

“The agreement must be reviewed and the government should take control of Hodeidah to put an end to failures,” Al-Baydani said.

Abdurrahman Hajjri, a leader with the Tehama Resistance, which launched a campaign against the Houthis, said the militants have turned the province’s ports into “hubs” to bring in advanced weapons from Iran after learning that government forces would halt their advance under the Stockholm Agreement.

He called for the Houthis to be “purged” from Hodeidah.

“Hodeidah and Salif seaports are the main artery of arms supplies to the Houthis and starting points for terrorist attacks in the Red Sea,” he told Arab News by telephone. “The only solution to the Houthi threats is liberating Hodeidah and bringing it and the entire coastline under state control.”

Despite the Yemeni government’s strong criticism that the Stockholm Agreement had allowed the Houthis to resupply and regroup, the UN’s Yemen envoy Martin Griffiths told Arab News in April that the pact averted a major military offensive that could ruin the city and worsen the humanitarian crisis in the country, which relies on imports of food and medicine through Hodeidah’s ports.

Sheikh Nawaf Al-Ahmad Al-Jaber Al-Sabeh has been sworn in as the new Kuwait Emir on Wednesday, vowing to carry out