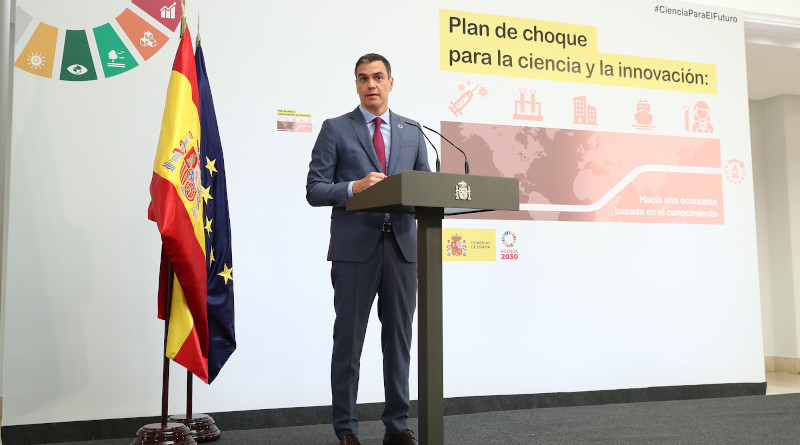 Spain’s Prime Minister Pedro Sánchez presented Thursday the Action Plan for Science and Innovation, which places science, R&D+i and talent at the heart of the recovery strategy after a decade of cuts and a lack of reforms. This Plan will help science and innovation head up solutions to the COVID-19 crisis, but will also enable the creation of industries and competitive companies with high added value, according to the Prime Minister.

The Plan includes 17 measures based on three cornerstones: research and innovation in health, the transformation of the science system and attracting talent, and driving business R&D+i and the science industry.

This Action Plan for Science and Innovation provides for investments for the sum of 1.06 billion euros, of which 396.1 million will be disbursed this year and the rest in 2021. The budget will be channelled through direct support for the science and innovation system, both for scientific institutions and R&D+i in strategic business sectors. In addition to this investment, there is a provision for 508 million euros in loans under advantageous conditions for innovative companies, as well as new instruments to promote private R&D+i.

As Sánchez explained during the presentation of the Plan, “Spain cannot continue turning its back on science but must strongly commit to it. If we want to be ready for future health emergencies, if we want to take measures to guarantee health and well-being, competitiveness and sustainability, if we want to create skilled jobs, new industries, a fairer society and a more resistant economy, we must commit to science”.

Together with Sánchez, the presentation of the Action Plan for Science and Innovation, which took place at Moncloa Palace, was also attended by the Fourth Vice-Prime Minister of the Government and Minister for Ecological Transition and Demographic Challenge, Teresa Ribera; the Minister for Industry, Trade and Tourism, Reyes Maroto; the Minister for Science and Innovation, Pedro Duque; the Minister for Universities, Manuel Castells; the Professor of Research at the Higher Council for Scientific Research (Spanish acronym: CSIC), Luis Enjuanes Sánchez; the scientist at Carlos III University, Nerea Luis Mingueza; the President of the Innovative Companies Forum, Luis Fernando Álvarez-Gascón, and the President of the I+E Innovation Spain Foundation, Helena Herrero, and other leading figures in the field of science and research.

This Action Plan does not seek to cover all public actions relating to science and innovation, nor does it reflect all the funds and programmes planned by the Ministry of Science and Innovation. The Plan focuses on those very short-term impact measures with the ability to boost the speedy recovery of our science and innovation system.

This Plan is also designed to be aligned with and complement the medium- and long-term reforms and programmes of the “Investment Plan and Reforms for the Recovery of the Economy” that the Government of Spain is preparing and that will be sent to Brussels for financing under the ‘New Generation EU ̈ Recovery Fund. The EU Recovery Fund will inject an unprecedented sum of resources to Member States precisely designed to boost the economic recovery with a far more sustainable model for the future. Hence, the funds allocated as part of this Action Plan will be complemented over the next four years – 2021-2024 – with significant resources from the Recovery Fund in the form of transfers, direct investments and additional loans.

The Action Plan and the medium- and long-term measures within the framework of the Recovery Plan are both interlinked with the Spanish Science, Technology and Innovation Strategy 2021-2027, which will be presented in the coming weeks and on which the Government of Spain has been working for more than a year under the coordination of the Ministry of Science and Innovation

First cornerstone: Research and Innovation in Health, with a provision of 215.9 million euros

The COVID-19 pandemic has made the importance of biomedical and health research clear, in particular, research in epidemiology and in public health. Accordingly, the first cornerstone of the Action Plan provides for the strengthening of human and material resources in this field, with the aim of reversing the major setbacks in financing and recover funds for health research and innovation. Specifically, the resources of the Carlos III Health Institute (Spanish acronym: ISCIII) – the main public body for biomedicine and health – which has played a central role in this crisis.

Among the measures agreed, 6 million euros will be included to support the National Microbiology Centre and the National Epidemiology Centre together with an increase of 50 million euros in the funds allocated to the round of proposals for the annual projects of the Strategic Health Action, through which contracts will be financed for research staff, projects, networks and support platforms for research and innovation throughout the country. Among other things, this will allow resources to be increased for the post-doctoral contracts under the Sara Borrell and Miguel Servet programmes.

The Plan also includes resources allocated to the round of proposals for research projects to combat the pandemic – the COVID Fund – which remains active.

In addition, the Personalised Medicine Strategy will be boosted to improve the prevention and treatment of diseases. Its launch will begin in the second half of 2020 and will have a provision of 77.3 million euros. One of the plans it includes relates to the creation of a State Centre for Advanced Therapies, geared towards research, development and the potential manufacture and distribution of personalised advanced therapies under the National Health System.

It also includes the reform of the 2007 Biomedical Research Act to develop research careers under the National Health System and the enhancement of high biological security facilities, particularly of the Research Centre in Animal Health of the National Agriculture and Food Research and Technology Institute (Spanish acronym: CISA-CNIA), with a direct investment of 29 million euros.

Second cornerstone: Transformation of Science System and attracting and keeping talent, with a provision of 523.5 million euros

The measures included in this second cornerstone have a dual aim – to implement structural reforms to provide greater stability for the professional career of scientific staff in all areas of knowledge and to provide more funds for the main instruments for the competitive financing of science in all its disciplines. Accordingly, the Action Plan addresses two situations that have been urgently called for by the knowledge generation system.

To that end, among other measures, a reform of the Science Act is planned that will include the recruitment of a stable number of research staff in the Spanish public science system. In Anglo-Saxon countries, this is known as ‘tenure track’ – stable recruitment subject to a positive evaluation – an ideal figure to establish the development of a research career.

In addition, financing will be increased for research groups, both on projects and for scientific-technical equipment and extensions to contracts. These measures, after a decade of low funding, with projects suffering cuts of more than 30%, will be implemented through the publication of rounds of proposals for 2020 and 2021.

In addition, support for extensions to contracts at the State Innovation Agency will be extended to include those that did not benefit from the first package that was approved under Royal Decree-Law 11/2020, of 31 March, which already benefitted more than 1,000 researchers. Fixed-term contracts that terminate between 2 April 2021 and 1 April 2023 may sign up to this measure with an extension of a period of up to five months, and institutions that have established permanent employment contracts between 2 April 2021 and 1 April 2023. It is calculated that this measure, with an estimated cost of 20 million euros, will benefit more than 3,200 researchers.

This cornerstone also includes strengthening Spanish oceanographic research, through the construction of a Multi-purpose Oceanographic Vessel with a Global Scope (Spanish acronym: BOMAG), which will increase the operational capacity of the Spanish Oceanographic Institute and allow it to address new responsibilities and challenges. It also provides for the creation of a Spanish Plant Germplasm Platform for Agriculture and Food Network, which will contribute, through the National Institute for Agricultural and Food Research and Technology (Spanish acronym: INIA), to improving the conservation and use of plant heritage in Spain.

The third cornerstone responds to the need to offer solutions to one of the most striking shortfalls of the Spanish system of science, technology and innovation – investment by companies in R&D+i activities and the capacity for collaboration between different parties in the system to facilitate the transfer of knowledge generated. To achieve that, five measures have been designed that will be implemented by the Centre for Technological and Industrial Development (Spanish acronym: CDTI), attached to the Ministry of Science and Innovation.

Firstly, a three-year plan will be implemented to double the support for business R&D+i through the new Strategic Plan of the CDTI Innovation Agency to a sum of 2.16 billion euros per annum. This involves organic growth in three vectors (R&D, technological innovation and venture capital) to achieve a relative weighting of public support for business R&D+i to that of the main European countries.

In addition, two specific plans are included to support business R&D+i in the automotive sector, with a direct investment of 25 million euros in 2020, by extending the CDTI’s Science and Innovation Missions programme, plus another 100 million euros in loans in 2021. And a second R&D+i plan in the aeronautical sector, with 65 million euros in direct support allocated to projects aimed at increasing the efficiency of aircraft of the future and at reducing polluting emissions from air transport.

This cornerstone also incorporates a programme of direct support for innovative SMEs so that they can mature their technology and their business model and consolidate their structure with a view to their subsequent escalation. This will begin with a pilot project in 2020, with a provision of 10 million euros, and will continue with a provision of 50 million euros in 2021.

In addition, and with the goal of developing the science industry and enhancing technology transfer, another programme is added to support innovative SMEs, which will promote the purchase of prototypes for research and technology institutions and centres that wish to develop start-ups that exploit new knowledge or that propose collaboration with a company with the technological capacity to industrialise and commercialise this technological knowledge. This will also be launched through a pilot programme in 2020, with an allocation of 2 million euros and will be further developed in 2021 with a planned investment of 50 million euros.