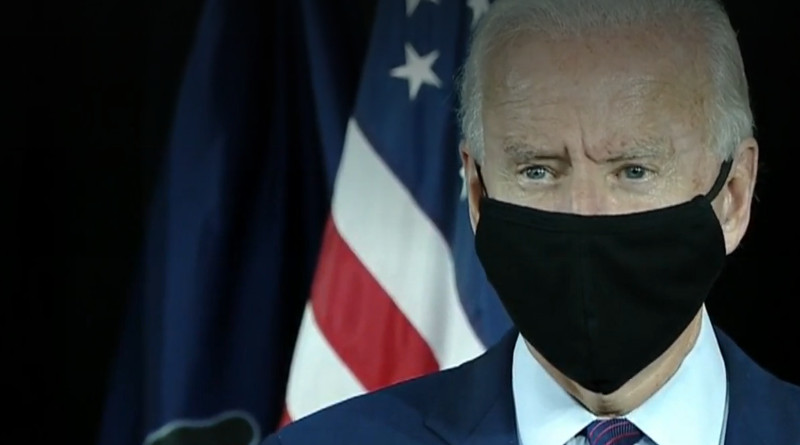 Has Joe Biden chosen his running mate, or, more accurately, has a running mate been chosen for him yet? Will it turn out to be Hillary Clinton after all because at the moment he announces publicly, hers is the first name that pops into his head? Assuming he picks a woman of color – because he has essentially been bullied into doing so – will he manage to make it to November 3 without insulting her, sniffing her, or getting her name wrong? These are all the questions America needs to be asking because God knows, life in 2020 is annoying, confusing, and, worse still, there’s now a show on TV called The Lost Resort.

The former vice president, when asked by a Fox News reporter if he had made the big decision, replied in the affirmative. Of course, that means little. At this point, the most common assumption is that the list is down to Rep. Karen Bass (D-CA), Rep Val Demings (D-FL), Sen. Kamala Harris (D-CA), and Susan Rice. The latter two, as it now stands, might be thought of as the leading contenders.

Each of these women has baggage, of course, and each has strong points, from a Democrat point of view. Demings came to prominence during the congressional inquisition – or impeachment investigation, as it was otherwise known – and represents a state crucial to electoral college victory. Bass is well-liked on the radical left and enjoys the endorsement of several prominent, if not establishment, Democrats.

Kamala Harris is perhaps the strongest candidate in terms of name recognition and resume. She’s a senator and a former state attorney general. She also has campaign experience even though her own attempt to win her party’s nomination was a dismal failure.

Those last two qualifications may count against her, though. Progressives, being vehemently anti-law and order, do not much care for her record as AG in California, especially since she acquired something of a reputation for being tough on crime. Also, Harris went after Biden during the Democratic Party’s primary contest, ripping him for his record on race relations.

Is It Rice Or Harris?

Biden and Harris appear to have sniffed and made up since then, though. During a rare question and answer session with reporters on July 28, the 2020 candidate clutched handwritten notes that were visible to at least one media camera. A section of those notes referred to Harris with a list of suggested remarks such as “Do not hold grudges.” “Campaigned with me & Jill.” “Talented.” “Great help to campaign.” “Great respect for her.” There is no question that the paper Biden was pictured holding was intended as an aide-memoire, since, printed in large, block letters at the top, it said “JOSEPH R. BIDEN, JR.”

Susan Rice, meanwhile, has a few things going for her: she’s a former member of the Obama administration, having served as both ambassador to the United Nations and national security advisor. Rice is also blacker than Harris, and since it appears that the left is even more obsessed with color now than ever before, that could be important.

Rice also has a couple of weaknesses: she’s a former member of the Obama administration, for a start. Perhaps having two erstwhile denizens of the Obama White House on the 2020 ticket would be too much even for the radical left, which has moved away from the previous president who turned out to be less radical than had been hoped.

Additionally, Rice may boast a wealth of foreign policy and national security girl scout badges, but she has nothing in the way of domestic policy chops. Then, of course, is the little matter of her very public attempts to cover up the terrorist attack on the U.S. consulate in Benghazi, Libya, in 2012. Although it was clearly a pre-planned assault – which left the U.S. ambassador and three other American heroes dead – the deadly incident was intentionally mischaracterized by Rice. She did the news talk show circuit and insisted that the violence was nothing more than a spontaneous demonstration against an anti-Islam Youtube video, which escalated beyond control.

Should Rice become VP – and perhaps eventually take over the top spot from a declining Biden – congressional Republicans could choose to relitigate the matter. Judicial Watch is still uncovering material about the Benghazi affair.

Within the next few days, Biden is set to reveal his VP pick. The sooner he does, the better for him, perhaps, since the focus will for a short time at least be taken off his rambling statements, his gaffes, and his casual racism. Rice or Harris or someone else? Who will it be? Biden’s best choice may have been Elizabeth Warren – for her progressive credentials and fundraising power – but it turns out she is only 1/1,024th of color. Put the nation out of its misery, Mr. Biden: The American people need to know, should Trump lose in November, who will be president by this time next year.

*About the author: Graham J. Noble, Chief Political Correspondent & Satirist at LibertyNation.com. Raised and inspired by his father, a World War II veteran, Graham learned early in life how to laugh and be a gentleman. After attending college, he decided to join the British Army, where he served for several years and saw combat on four continents. In addition to being a news and politics junkie, Graham loves laughter, drinking and the outdoors. Combining all three gives him the most pleasure. Individual liberty is one of the few things he takes seriously.

Home » Biden Claims He Has Picked A Running Mate: So Who Is She? – OpEd