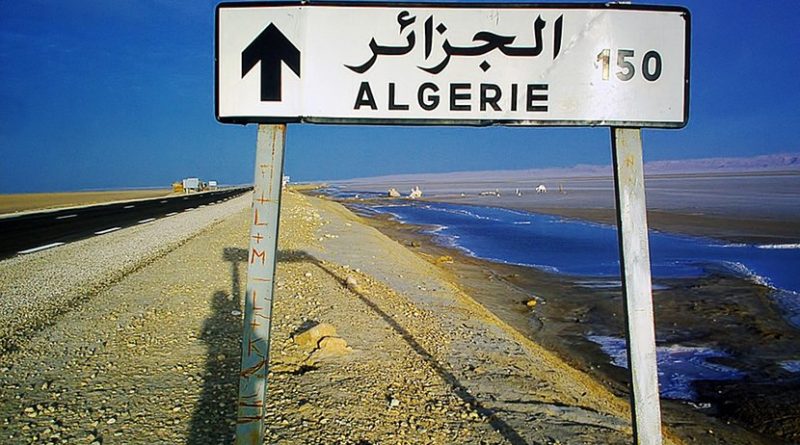 Algerian authorities have jailed dozens of people for peaceful protests in the six months since the beginning of a wave of street demonstrations that forced the resignation of President Abdelaziz Bouteflika, Human Rights Watch said.

The authorities have arrested people for peacefully carrying a flag or a protest sign. They jailed a veteran of the independence war for criticizing the army, shut down meetings by political and other nongovernmental groups, and blocked a major news website. While large street protests have continued every Friday, police forces have deployed massively in Algiers’ central streets and squares and at checkpoints, effectively limiting the number of people who can reach the march, and then tightly controlling those who do.

After President Bouteflika resigned on April 2, 2019, Senate President Abdelkader Bensalah replaced him, pending new elections, as provided by the constitution. The authorities set a new presidential election for July 4, but then postponed it to an undetermined date after pressure from street protesters, who demand a democratic transition before holding presidential elections. Popular slogans during the marches demand the resignations of Bensalah and of Prime Minister Noureddine Bedoui, among others.

Since the resignation of Bouteflika, one of his high-level appointees, Ahmed Gaid Salah, 79, the army chief of staff and deputy defense minister, has widely been considered Algeria’s new strongman. On August 26, Gaid Salah rejected the protesters’ demand for a transitional structure and phase and urged the authorities to organize a presidential election “as soon as possible.”

Since April, Gaid Salah has warned of “foreign parties” seeking to “infiltrate demonstrations” and “destabilize Algeria.” On June 19, he gave a public speech in which he accused “a small minority of people who bear other flags [than the Algerian flag]” of “infiltrating the protests.”

Starting June 21, security forces began large-scale arrests throughout the country, targeting marchers with Amazigh flags, a symbol of the large ethnic community of the same name, also known as Berbers. About 40 protesters remain in custody, most in Algiers. All are under investigation for “harming the integrity of the national territory,” which carries sentences of up to 10 years in prison, under penal code Article 79.

Waving a flag of an ethnic community is an act of peaceful expression protected by the International Covenant on Civil and Political Rights, which Algeria ratified in 1989, and the African Charter on Human and Peoples’ Rights. Algeria should free and drop charges against anyone arrested for possessing or waving a flag, Human Rights Watch said.

On July 9, a first instance court near Algiers sentenced Mouaffak Serdouk, a 40-year-old supporter of Algeria’s football team, to a year in prison for “publicly displaying a paper that can harm the national interest.” He had been deported from Egypt two weeks earlier, after Egyptian authorities arrested him in Cairo. He had stood near a stadium where the Algeria team was playing a football match, carrying a sign encouraging a change in administrations in Algeria. He is in prison in Algiers and has appealed his conviction.

On June 30, police arrested 87-year old Lakhdar Bouregaa, a prominent veteran of Algeria’s independence war, at his home in Algiers, four days after he said at a public meeting, later broadcast on YouTube, that Algeria’s army is a collection of “militias.”

A prosecutor referred his case to an investigative judge, who opened an investigation for “weakening the morale of the army,” which could lead to a prison sentence of up to 10 years.

Bouregaa, one of the few surviving commanders of the war of independence, has supported the street protests since they started in February. He has participated in several demonstrations, and severely criticized the country’s interim leaders.

On August 27, local authorities forbade a series of meetings planned near the city of Bejaia by the Rassemblement Action Jeunesse (RAJ), a group active in pro-democracy protests since they started. The authorities did not explain their decision, RAJ president Abdelouhab Fersaoui told Agence France-Presse (AFP).

On September 5, local authorities arrested over 20 pro-democracy and human rights activists who were planning to hold a RAJ meeting in a public square in Bejaia. They were freed about 3 hours later, and the meeting could not take place.

On August 27, without explanation, the authorities ordered three opposition parties to cancel a planned joint meeting in Algiers the next day. The parties, the Socialist Forces Front, the Rally for Culture and Democracy, and the Labour Party, are members of the Forces of the Democratic Alternative, a political alliance created to back the protesters’ call for a democratic transition. The meeting was to be the alliance’s inaugural gathering.

Since June 12, Tout Sur l’Algérie (TSA), one of the country’s top independent news websites, has been inaccessible most of the time inside Algeria, except for those who use a virtual private network connection. TSA Director Hamid Guemache told Human Rights Watch during a meeting in Algiers on August 5: “This is an arbitrary block ordered by the authorities. We tried to contact the government to get explanations, but they refused to answer our questions. This blockage is a serious threat to our survival as an independent website.”

TSA has extensively covered the street protest movement, including the protesters’ criticism of the army in general, and Gaid Salah in particular.

Since the first protests in February, security forces have tolerated large gatherings in public spaces on Fridays, the day during which the biggest demonstrations are organized weekly. However, security forces tightly control crowds that assemble on other days.

On August 6, a Tuesday, Human Rights Watch witnessed hundreds of security men equipped with anti-riot gear circling a crowd of protesters in central Algiers and progressively pushing it out of Place de La Grande Poste, breaking the crowd into smaller and smaller groups until the protest dissolved about one hour after it started.

On Fridays, security forces install checkpoints at various approaches to the capital, significantly slowing down drivers who want to reach the protest sites. Several people told Human Rights Watch that security forces prevented most vehicles from entering the capital during most of the day, until the protests had died down. During Friday protests, authorities also suspend subway service in Algiers and close tramway, train, and bus stations near the protest sites.

On August 19, Algerian authorities detained a Human Rights Watch employee, Ahmed Benchemsi, as he was observing the Friday march on Didouche Mourad Avenue in downtown Algiers. The authorities detained him for 10 hours and seized his passports, holding them for 10 days without notifying him of any charge, then deported him. According to Reporters Without Borders, several foreign journalists have been deported since April, including the director of the AFP bureau in Algiers and correspondents of Reuters and TRT, a Turkish state-owned broadcaster.

“As authorities violate rights and intensify their crackdown on dissent, protesters are starting to prepare for bigger marches in September,” Fakih said. “The authorities should step back and grant the Algerian people the freedoms of expression and assembly they are entitled to.”