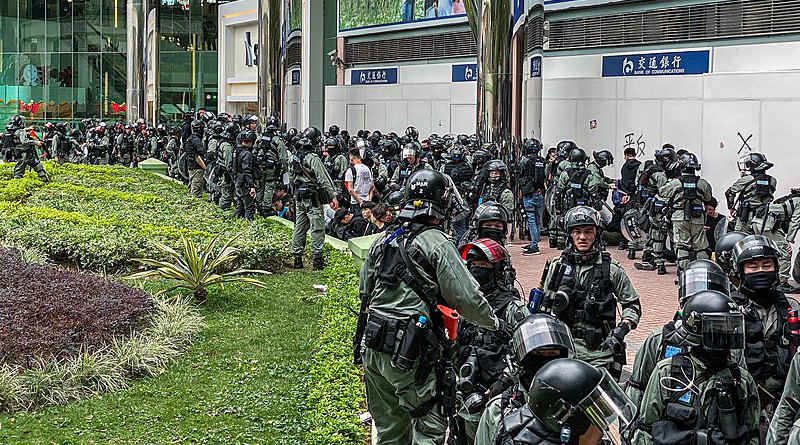 China—amidst widespread international criticism and no letting up of protests on the streets of Hong Kong—implemented the draconian National Security Law (NSL) on June 30. This was done within weeks of the country’s rubber stamp legislature’s decision to this effect. The NSL, which criminalises political dissent in a way yet unseen, has caused unprecedented damage to Hong Kong’s promised autonomy. This commentary examines the implications of the NSL for Hong Kong, and explores India’s response to these developments.

Over the past two months, global outrage against Beijing’s move has snowballed, with several Western democracies, led by the US, recalibrating their policies towards Hong Kong. The US has also imposed sanctions on eleven officials in the Hong Kong administration, citing their role in ‘crushing’ people’s freedoms.

China’s actions in Hong Kong have also evoked a response from New Delhi, which made a cautiously crafted statement at the UN Human Rights Council’s meeting in early July. India’s permanent representative to the UN in Geneva, Ambassador Rajiv Chander, said that India is closely monitoring ongoing developments given the sizeable Indian community in Hong Kong. He also expressed India’s hope that “the relevant parties” will take into account the international community’s concerns, and “address them properly, seriously and objectively.”

That India reacted to these developments marks a welcome shift in its usual approach, which in the past entailed hesitance to even give visas to pro-democracy activists from Hong Kong and other regions under Chinese control. Still, New Delhi can do more, keeping in view the dramatically altered political and legal landscape in Hong Kong, Beijing’s unbridled aggression across various geopolitical flashpoints, and the ongoing churn in the India-China relationship.

The End of Hong Kong As We Know It?

The NSL is touted by Chinese authorities as a new legal framework that seeks to prohibit acts of “secession, subversion, terrorism and foreign interference” in Hong Kong. In reality, the legislation is primarily aimed at crushing dissent: Hong Kong has seen spirited public demonstrations against the Chinese Communist Party’s (CCP) diktats in recent years. The NSL severely undermines the “One Country Two Systems” principle, as part of which Hong Kong residents were promised basic freedoms—including rights to free speech and assembly, free press, and an independent judiciary.

To be sure, the authorities in Hong Kong had been squeezing the space for pro-democracy activism even before the NSL. However, after the NSL, the crackdown on dissidents has intensified dramatically. The law has introduced new crimes and associated legal procedures, as well as allows mainland intelligence agencies to formally establish themselves in the city. Consequently, it has given further ammunition to the police and other authorities to rein in any public display of protest—be it on the streets, newspapers, or the Internet.

Several pro-democracy politicians have been arrested on flimsy charges, while others have been disqualified from running for a seat in the city’s semi-democratic legislature. The election itself has been postponed by a year on questionable grounds. Meanwhile, media organisations based in the city are under pressure, with authorities seeking to intimidate them through high-profile arrests and visa curtailment. The NSL will also erode the independence of Hong Kong’s judiciary. It allows for a transfer of jurisdiction over certain cases to the mainland, where the suspects would face unfair trials and a denial of human rights.

Indian foreign policy has traditionally taken a cautious approach to human rights and democracy elsewhere, balancing it with the principles of non-interference and non-intervention. While it would be impractical to expect a dramatic departure, there is scope for New Delhi to do more in its response towards Hong Kong while staying within the existing normative framework. The developments in the city, which is a global financial hub, have a direct bearing on the 38,000-strong resident Indian community, as well as India’s economic presence.

Multiple, and more strongly-worded statements from New Delhi will help reflect Indian concerns better, and provide an opportunity for stronger signalling to China about a sterner approach. It will also strengthen India’s participation in global discussions on the future of Hong Kong. India must review its 1997 extradition treaty with Hong Kong in light of eroding judicial independence. With the mainland’s authoritarian judicial practices spilling over into Hong Kong, India’s legal arrangements with the city cannot remain unchanged.

India’s policy-making elite are no doubt considering the larger context of China’s growing belligerence around its geography, including the still unresolved border standoff. This consideration must reflect more clearly in diplomatic statements that respond to developments in Hong Kong. After all, Beijing’s move in Hong Kong cannot be viewed in isolation from its wider attempts to alter various geopolitical equilibria. Pushing back against its agenda is a strategic imperative shared by multiple countries, not least by neighbouring India.

India is already exploring ways to raise the non-military costs for China’s aggression in Ladakh, in the face of Beijing’s uncooperative and deceptive approach in talks over the LAC. Upping the ante with the opportunity provided by Hong Kong can be a natural progression as India recalibrates both its short and long-term policies towards China. Any concerns that such a move would harden Chinese positions on India’s internal issues, notably Jammu and Kashmir, would be misplaced—China has already tried to raise the Kashmir issue multiple times at the UNSC in the past year. India must be confident of articulating and defending its positions, irrespective of the degree of diplomatic confrontation that China lobbies back.

Home » Hong Kong: Why New Delhi Must Do More – Analysis