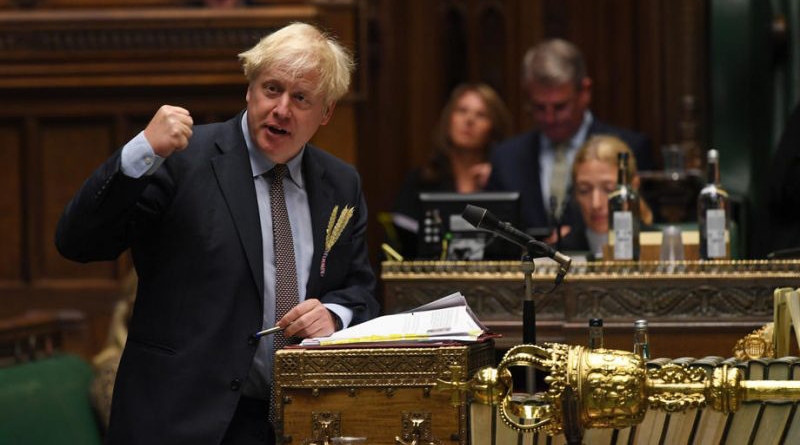 (EurActiv) — Boris Johnson’s government put itself on a collision course with the EU on Wednesday  (9 September) after publishing a bill that would breach key parts of its Withdrawal Agreement with the bloc.

The Internal Market Bill, designed to govern trade within the UK’s four nations, states that there will be no new checks on goods moving from Northern Ireland to the rest of Great Britain. It also gives UK ministers powers to modify or “disapply” rules relating to the movement of goods that will come into force from 1 January, when the UK leaves the EU’s single market, if a successor trade agreement is not reached.

Both provisions run counter to the Irish Protocol which guarantees that customs checks at the border between Northern Ireland and the Republic do not return. By using the words “notwithstanding” on several occasions, the bill would set aside previously agreed law.

The right to override the Withdrawal Agreement would also apply to state aid, the bill states.

The treaty, which was ratified into UK law in January, had been agreed “at pace in the most challenging possible political circumstances” to “deliver on a decision by the British people”, the spokesman said, adding that Johnson had signed the Withdrawal Agreement “on the assumption that subsequent agreements to clarify these aspects could be reached”.

While trade talks in London between EU chief negotiator Michel Barnier and UK counterpart David Frost began on Tuesday and will last until Friday, Cabinet Office minister Michael Gove will meet on Thursday European Commissioner Maros Sefcovic, who lead for the UK and EU on the Joint Committee on Northern Ireland, to discuss the contents of the bill.

In the House of Commons on Wednesday, Johnson described the legislation as “a legal safety net to protect our country against extreme or irrational interpretations of the Protocol, which could lead to a border down the Irish Sea, in a way that I believe would be prejudicial to the interests of the Good Friday Agreement and prejudicial to the interests of peace in our country.”

The bill prompted an angry response in Brussels and Dublin, as well as from opposition lawmakers in the UK.

“Proper negotiations are conducted on a ‘no surprise’ basis … and to drag Northern Ireland back into this is extremely divisive – and dangerous,” Irish prime minister Micheál Martin told lawmakers.

An Irish government spokesman said later that Martin had spoken to Johnson “in forthright terms” about “the breach of an international treaty, the absence of bilateral engagement and the serious implications for Northern Ireland”.

Meanwhile, European Commission President Ursula von der Leyen tweeted that she was “very concerned about announcements from the British government on its intentions to breach the Withdrawal Agreement.”

“This would break international law and undermines trust,” she said.

The draft bill also came as a surprise to many in the UK government and is not believed to have been signed off by Johnson’s Cabinet.

A handful of Conservative lawmakers have signalled their opposition to the bill – with Theresa May and John Major, both former Conservative prime ministers, arguing that it would undermine international trust in the UK – but with an 80 seat majority, there is little doubt that it would be comfortable passed by the House of Commons.

However, the government does not have a majority in the House of Lords, which, although it cannot veto the bill, could delay it by one year. The Scottish government has also signalled that it could take legal action which could also delay the bill’s entry into force.

At the moment, most analysts view the bill as a negotiating tactic by Johnson to force movement from Barnier on state aid and fisheries, the long-standing points of division on a new EU-UK trade pact.